Today’s entertainment industry is certainly a balancing act. Many people have to have different talents in order to get buy. Singers turn actors, actors turn directors, directors turn writers, and writers eat scraps of the table.

Jokes aside people can no longer have one bankable skill and must learn to work 25 hours a day to keep up with the speed of the industry.

That’s before you even factor in the technological advances that keep us connected to a world of internet and having to secure a loving online profile for our fans and producers.

So speaking with Ali Cook, a magician, actor, AND writer really solidifies the sentient of having many talents up his sleeve (and a handkerchief too.) To celebrate his performance in The Call Up, a British sci-fi thriller, we spoke with Ali about his upcoming role.

“It’s quite busy today,” says Ali a week before the release of this astonishing well-made thriller in which he plays Edward, a gamer called up to play a heavily realistic virtual reality game. “I have press and then I’m flying over to Cannes to do stand-up comedy.”

Oh yes, he’s a stand-up comic too. As a performer, Ali never thought he’d become an actor but he says that the script for The Call Up was too tantalising to refuse. “It was a little bit like those eighties movies such as Tron or War Games that I watched as a kid. I have a soft spot for those films and a film about the world’s best game appealed to that.” 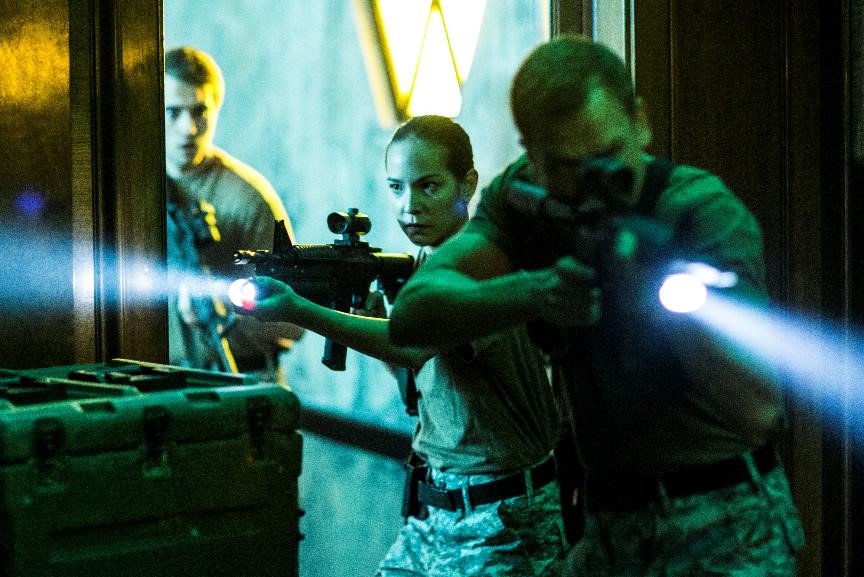 What’s more, the producers of the film had Cook hooked by showing him small teasers of the film which the actor says were fantastic. “It was sensational and unique with really fantastic special effects.”

As aforementioned, Cook plays Edward, a city type turned gaming pro called up to test this highly realistic game. “When people think of gamers, they tend to think of nerds who are madly into computers when there is actually this subsection of guys in suits, working in the city all day, and are then up to three in the morning playing ‘shoot em up games.’ Edward is a character offering an alternate to the stereotype. He’s well-educated, posh, and a city boy that I imagine working in law and very bright. He’s not in for the money. He’s purely in for the comrade.”

Despite playing the role of a gamer, Ali stresses that he isn’t into gaming himself. “I made a decision when I was 17 to move away from gaming because I couldn’t be good at it and be good at magic and comedy at the same time. So I stopped playing.”

The film itself presents so many complex themes including commentary on war and the realism of gaming. “It’s a double edged sword, many people love to it but from the safety of their sofa,” Cook explains as he delves deeper into The Call Up’s narrative. “If it were that realistic, you’d hate it. It brings to light the reality of war, if you really shot someone, and it felt completely real, would you do it?”

When talking about the technology aspect of The Call Up and our own advances, Alli mentions how he feels the conflict is more about the human aspect and how it impacts your morals. “That’s the idea, would you really want to play if it were so hyper-realistic? And I believe that people wouldn’t.  Though it’s a cool how rapidly we progresses the same way 15 years ago, no one would believe you could talk over the phone like Star Trek. Films like the matrix seems so far away and so does the technology in the game. It could be less than ten years away – scary thought.”

Apart from wearing some fetching blue spandex, Ali Cook tells us that he had few difficulties in filming, particularly from the relentless schedule. “It was seven to seven, six days a week, and because it’s a computer game, everyone is in every scene. I’m certainly in the film at every possible moment. Sometimes you’d get a break but you are quickly back into filming.”

But this didn’t stop him from fitting in a gig during filming. “I performed in Amsterdam for a big company Christmas whilst I was there,” laughs Cook. It wasn’t just the schedule that was difficult. “We had to wear a thong and the helmets looked amazing but we’re highly uncomfortable.”

Ali Cook is not relaxing any time soon. He has two films lined up (though he can’t talk too much about them) and will be doing a period gangster film in the autumn, adding for variety to his life. For someone who didn’t initially get into acting, Ali is certainly brilliant at it. “I really enjoy it, and it’s great alongside the comedy world. Soon you are forced to write your own material and comes in very useful for role in a film and with dialogue. I like the idea of being the best you can be.”

THE CALL UP IS OUT IN CINEMAS MAY 20th