Young adult novels-turned-movies are the thing of today, and they aren’t going anywhere. Some are getting tired of them, and it’s very easy to see why; they’re almost always exactly the same. You can complain about superhero movies and their similarities all you want, but we’ve had so many movies in the last six years about a young protagonist in a dystopian/post-apocalyptic future, thrust into a situation they’re not prepared for and having to survive and fight against powerful/unknown forces, with the help of friends they make along the way and a love triangle thrown in too. That gets far more grating than comic book characters going toe to toe with each other.

Needless to say, The 5th Wave Blu-Ray disc was not the most exciting thing I’ve received in the post…But it certainly wasn’t the worst, either. 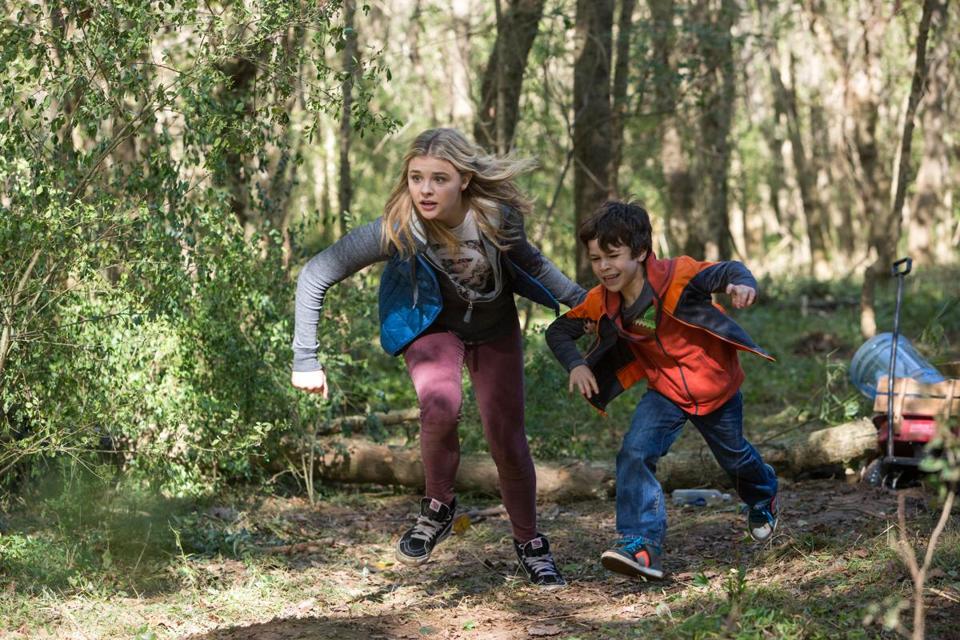 Cassie Sullivan (Chloe Grace Moretz) is an ordinary teenage girl living in Ohio with her parents (Ron Livingston and Maggie Siff) and little brother Sam (Zackary Arthur) when a strange UFO, controlled by a race referred to as the Others, towers above the city, and before long, four waves of alien forces are sent to wipe out the human race. When the army intervenes, Cassie finds herself alone, and sets out to find Sam before The 5th Wave strikes.

I’m one of the only positive voices in a sea of negativity when it comes to this film, and to be fair, it is flawed; the dialogue is awful. Like, pretty much all of it. For the most part, it’s mostly exposition, and the characters basically just explaining everything to you, and if it’s not exposition, it’s just downright cringe worthy. On top of that, there are certain scenes that are just a bit “ugh” like Cassie spotting Evan Walker (Alex Roe) bathing in a river and apparently having her sexual awakening right there and then.

Not to mention, some of the performances are weak, mainly that of Livingston and Siff. To be fair ,they aren’t given much to do, but the short time they have on screen is very un-impactful (Just like literally every performance Ron Livingston has ever given ever). Beyond that stuff, this is a very solid film. As far as first films go in YA franchises, this is most certainly one of the best. It’s better than the first Twilight, the first Hunger Games and the first Divergent film. (Although let’s be honest, that’s not hard to do).

The best part of the film is arguably the first half an hour, in which Cassie’s narration explains the waves; it’s a very engaging start, and looks magnificent on Blu-Ray. I’m starting to wonder if I was actually sent the 4K disc, because I can’t remember the last time I looked at a film and went “Wow”, and Lord knows I didn’t think it would be for a film like this. The effects are great, and whilst it is almost entirely exposition, it sets the tone of the film really well and explains it all perfectly. Admittedly, the film slows down once Liev Schreiber turns up, and there are some questionable decisions by characters in this first act, but it remains totally solid all throughout.

The performances, bar the aforementioned ones, are pretty decent, with Chloe Grace Moretz turning in her best performance in a while, and Nick Robinson redeeming himself for his terrible output in Jurassic World.

The way the story plays out is also quite interesting; like, Robinson’s character Ben Parish is set up as the love interest very early on, yet he actually goes on to become his own, well rounded character with his own story (Arguably more interesting than Cassie’s too) and a love interest of his own. It’s nice to have two lead characters in a YA film that have balanced roles but aren’t destined to be in love with each other.  The Others make for very interesting villains, and no spoilers, but there is a really great plot development towards the end that sold me on this film being actually good.

Technically, the score is great, adding a nice intensity when need be, the direction and cinematography adds a certain poignancy to some scenes which is quite unexpected, and the ending is satisfying but definitely not complete, leading to some actual excitement for another film.

It’s part of an over-saturated genre, but The 5th Wave is a very decent film that will hopefully lead on to more interesting things.

THE 5TH WAVE IS OUT ON DVD AND BLU-RAY NOW!