Is it fair to say that Steven Spielberg is the most famous film director of all time? I mean, you could argue Hitchcock, but Spielberg is a guy that people who don’t even watch films regularly know. Say the term “film director”, he’s the first name that usually pops up. He’s used in all sorts of jokes about films, and frequently set as the bar for good film making (“You’re not Steven Spielberg”). He is a man that has made an undeniable impact on cinema as we know it, as whilst he may be considered a stock choice for best director of all time (Or one of them, at least), there’s a reason why stock choices are stock choices: They’re fucking good. I’ve become fascinated with the man recently.

Since this year sees a new release of Close Encounters of the Third Kind, the release of his new film The BFG in cinemas this July, AND the BFI are celebrating his films with a whole Spielberg season, I thought it would be a great time to revisit the man’s entire body of work, from his first film Duel to his Oscar-winning latest Bridge of Spies, and take a look at the evolution of one of the most passionate men in cinema.

Duel (1971) tells the story of business man David Mann (Dennis Weaver), who is driving to a meeting on a long, empty stretch of road when he suddenly finds himself being chased off the road by a hulking gasoline truck. It’s part chase movie, part monster movie, and the monster movie aspect is handled really well. We never see the driver’s face, nor does he have a name or even a motivation for what he does – He’s just this looming, evil presence that constantly has our hero on edge. It’s definitely a ‘first’ film; there is so much about it that is so unrefined, and so many Spielberg-esque features that would go on to develop as he made more films, such as tracking shots.

For a first go at it, it really is quite decent; it’s very inventive and very lovingly crafted. Straight off the bat, Spielberg was trying his best to make a damn great movie and it didn’t pay off in spades, but the effort is so clearly there. Dennis Weaver gives a pretty damn good performance, especially in the bar scenes in which his paranoia boils and it’s without a doubt the most engrossing moment of the film. The score is great too; the film is full of heavy music that ups the tension and adds real fear to the chase sequences. 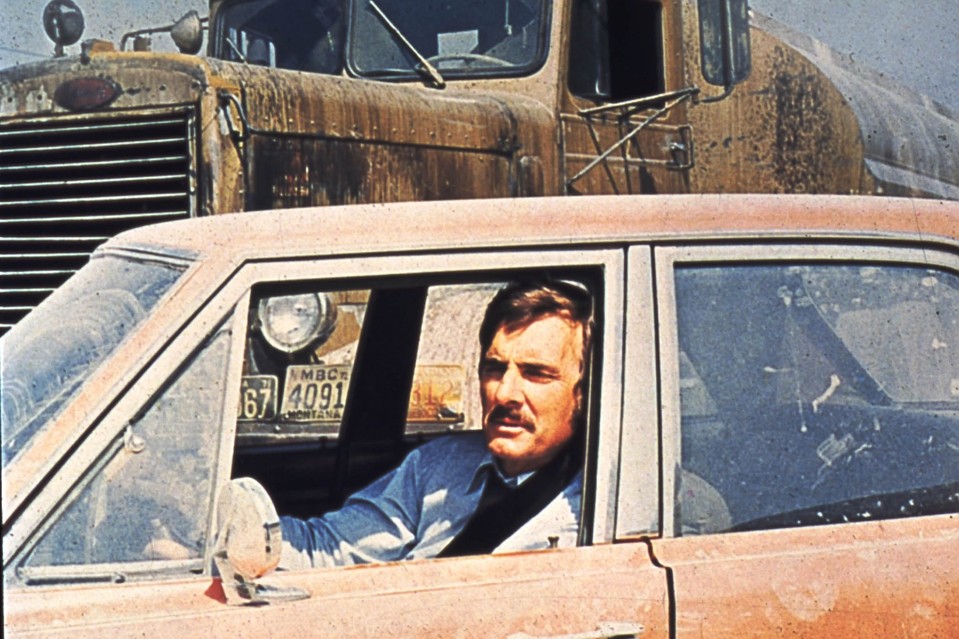 Where this film fails is it’s ability to hold interest, and that’s largely due to the length. It’s not even a long film; the original TV cut is 76 minutes long, and the version released to cinemas was 89 minutes, but it’s still too long. After a while, it does kind of feel like you’re watching the same chase sequence over and over again, and whilst they try to interject some character development in between these scenes, it really adds nothing to the film. In fact, the film would arguably be better without any character development. Yes, the bar scene is the best scene in the film, however, this might have played out better as a short film; cut out anything to do with David’s wife and kids, or him in the bar, or absolutely anything, and shred it down to maybe 30-40 minutes at most. See, the character development is unnecessary because it doesn’t really make him any more or less likable as a character. It doesn’t really add any stakes (Apart from him dying and his family being ruined obviously, but the thought of that never really occurs during the film), and we know he’s not strictly a bad guy, so if this film just consisted of one extended car chase, it would be great. The truck is already handled perfectly, and let’s face it, we’re going to immediately side with the seemingly innocent guy who being chased down by that monster of a vehicle, so combine that and JUST that with the excellent camera work and great score, it’d be quite an exciting short.

As far as directorial debuts and TV movies go, Duel is just fine, but it feels like there was a missed opportunity by making it feature length. It’s not fair to say it’s boring, but it definitely could’ve been handled in a more exciting way. Still, it goes to show just how far Spielberg has come. That’s one down, join us next time where we’ll be looking at his second film, another road movie called The Sugarland Express.