Studio Ghibli have taken a bow. The Japanese animation studios is bidding us farewell with When Marnie Was There, (which is out in cinemas now). Though we hope this isn’t forever parting, the sad news that our yearly dose of evocative, beautiful, and yearning films have ceased to be has glazed our eyeballs with an undeniable sorrow. For decades, we have been immersed in their opulence and it is time to see them off in style.

To honour Studio Ghibli and their cinematic mastery, we’re counting down their feature films! Which one tops the list? Find out now!

Honourable Mention: Nausicaa of the Valley of the Wind and Ocean Waves which, for separate reasons, aren’t classed as Ghibli films.

Often regarded as the worst of Ghibli, Earthsea denotes a failure in animation and story-telling. Despite the studio’s acclaim for producing phenomenal and original movies, Earthsea is a generic and awful fantasy drama that makes the recent release Warcraft look like a masterpiece. The film revolves around Prince Arren who, within five minutes of the film, you’d want to kill, completely obliterating The film revolves around Prince Arren – who you want to kill after five minutes – and it completely obliterates Urusla (is this meant to be Ursula) K. LE Guin’s novel and story].

Isao Takahata is famed for changing the style of his movies and in many cases that works. For My Neighbours the Yamadas, it doesn’t. The simplistic design of the characters set a crude tone for the film and detracts from the narrative. The film has some fun and hilarious moments but it suffers from a straight-forward plot and an off-putting animation style.

Directed by Hayao Miyazaki’s son Goro, From Up on Poppy Hill is great but perhaps a little disappointing coming from Studio Ghibli. The minimal story tells the tale of a school trying to save its old clubhouse. Though capturing the mood of Japan, it somewhat suffers from a bizarre second half and a twist completely unnecessary to the film, showing that a modest script may have been better.

The biggest problem with Ponyo is that it is far too simplistic. The lead character has a little IQ and, as a result, the movie feels stretched over its length. Though there is plenty of gleeful elements here, the animated seems a little crude and unaspiring. The film itself is somewhat infantile and becomes really irritating after a while. Perhaps catered for a younger audience, Ponyo suffers from lacking a certain something.

The thematic resonance with The Wind Rises is what propels it up the list compared to say Ponyo. The film revolves around a man who creates a weapon for WWII and sees the consequences of his designs. Though the movie pulls away from the meaning and depth it could be conveying which is somewhat detrimental to the overall product, the message still stays with you, especially as Miyazaki flies the film with the greatest human elements.

This movie may not be complicated but it is still filled with joy and glee. It’s also really funny. Silliness does not go unappreciated in a film about a girl who discovers a whole world of cats. I’ll let you take a moment to think on how awesome that would be. True, it doesn’t have the overarching details or feverishly brilliant look of other films, but boy – is it ruddy funny.

Captivating from the very beginning, When Marnie Was There is the latest (and possibly final) film for Studio Ghibli. Telling the tale of a young sheltered girl who discovers a spooky new friend, Hiromasa Yonebayashi’s work is a magnificent adventure of encompassing discovering and unquenchable feeling.

I’m not going to lie to you: This film is really weird. For example, the story revolves around raccoon/dog creatures with shapeshifting balls. Not plastic balls for sports. Testicles. The dingle-dangles. Those kind of balls. Balls which change shape….

Pushing that aside, Pom Poko actually has an affecting storyline that is helped by the silliness of the premise. And I dare you to watch this film without feeling a little tear in your eye. 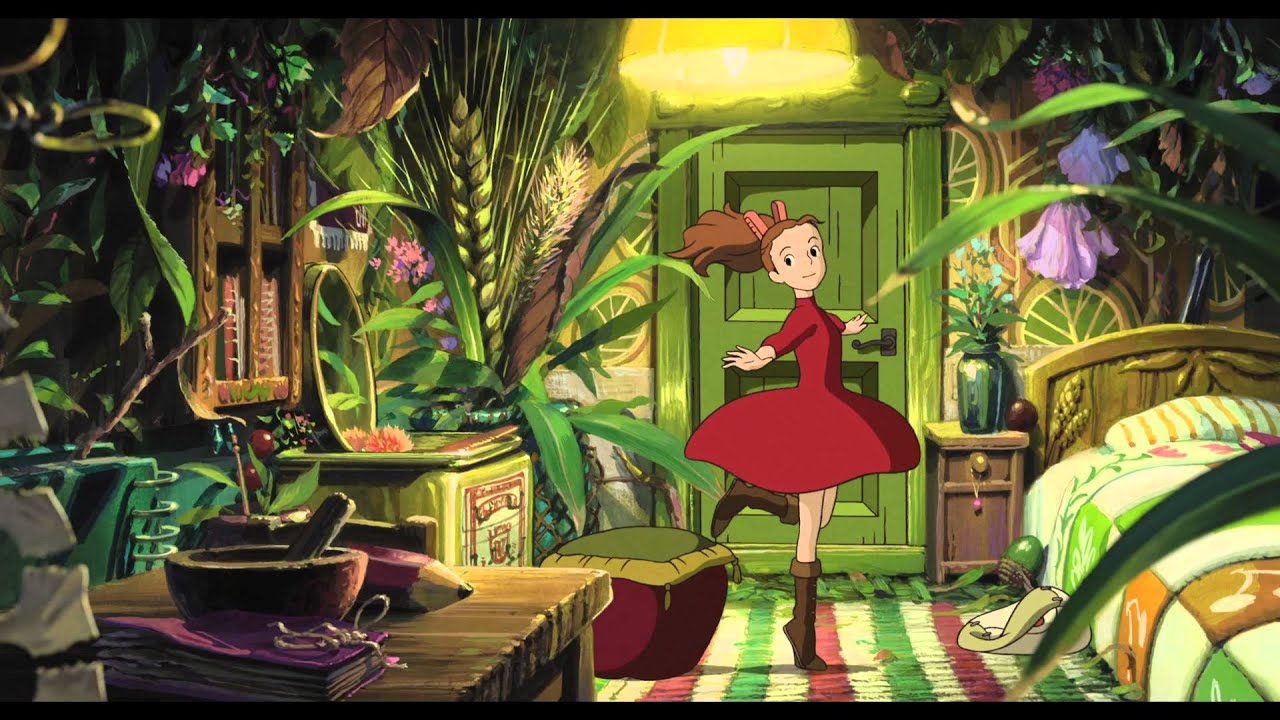 Yonebayashi brings his acute sense of childhood, imagination, and supernatural discovery with this fantastic story that is not wholly dissimilar to The Borrowers (a novel which apparently, the movie is based on). The family-friendly adventure is sumptuous and lavish, denoting the fantastic partnership with American company Disney.  There’s also the added bonus of Will Arnett and Amy Poehler in the English dub which, I think you’ll agree, is brilliant.

“War turns men into pigs,” literally with this fantastic WWI piece. This may be a literal translation of the phrase but it does not take away from the war themes and courageous narrative. The story of a pig who is a flying ace who was once a strapping young man but is transformed into a pig. Balancing the seriousness and the fun, Porco Rosso is a delightful that is a mash of pastel palettes.

From the second the film rolls on screen to the moment it flitters away, you’ll be immersed in this spectacle with pure wonderment. As a young boy and a girl with a crystal race against pirates and foreign agent, you’ll follow them each and every step of the way. You’ll be carried away on the clouds that populate the screen. Castle in the Sky is astounding with every beat. Not quite sure what you’re going for here, but it feels like there is something missing from this sentence…

Re-released for the UK’s Studio Ghibli season, Takahata’s work was originally withheld from release by that damned Disney company. Luckily for us, it is now available for us to devour in all its brightness and beating emotions. The film revolves around an unmarried woman who visits her relatives in the countryside, soon awash with memories of her younger life. Honestly just a transcendent feature that weaves past and present with yearning nostalgia, Only Yesterday is finally in our grips and it is glorious.

The sad story that this would be Yoshifumi Kondo’s only feature with the studio really resonates here. The movie is a wistful and blossoming tale of adolescences, joy, and wonder that is completely unadulterated. It’s hard not to relate with the themes here. It tells the tale of a young bookworm who dreams of becoming a writer and suddenly falls in love with a young lad who wishes to make violins. Through their relationship, they find the resolve and determination to reach their dreams. Outstanding work that will stay with you forever.

Annnnnnnnnnnnnnnd the theme song is stuck in your head. The cinematic outing for the now cult figure is a charming and somewhat powerful film. Totoro revolves around two young girls who discover the squishy beast when their mother is sick and they have to move to a small village home. There they befriend the titular character and are bustled away on a cat bus and to a new world, right underneath their noses. The simplicity really enhances the film here and director Hayao Miyazaki grabs the attentions of young and old children alike.

Considered widely as one of the best (or, truthfully, the best known in the Western World,) Spirited Away introduced a lot of folk to the power of Studio Ghibli. The story of a young girl whisked on a magical journey after her parents are turned into pigs marries the enchantment of a child’s imagination. Involving plenty of memorable creatures and a narrative so exquisite that it can only be matched by the sheer tour-de-force of animation, it’s hard not to be …ha…spirited away with this.

Taking a departure away from the traditional anime look of Ghibli’s work, Kaguya’s director Isao Takahata utilises watercolour art and the result is breath-taking. The striking aesthetics broiled with a narrative based on a Japanese folklore is teeming with perfect details, a splendid array of colours, and this glorious fairy-tale. A redolent engulfing animated feature.

Helmed by Miyazaki, Howl’s Moving Castle is another accomplished feat that is an alluring masterpiece and visionary film. The movie revolves around a young girl transformed haggard by a jealous witch. From there, she journeys with the mystical Howl and his every changing titular castle. This delightful splendour is a marvel of quirky characters, and the inventive movie transforms and reforms in this amazing narrative. With an endearing lead character, Howl’s Moving Castle is captivating to watch.

Heart-breaking. That’s it. That’s all I have to say. Can we move on?

OK. Grave of the Fireflies tells the tale of two orphans post-war and trying to survive. And it is completely devastating. That being said, director Isao Takahata manages to ensnare some eloquence and picture poetry as the endearing relationship between an older brother and his little sister unfolds. Though trying to keep a dry eye throughout the film is tricky, you best submit to the tears now. No one is going to judge.

Look, yes, OK. I may have taken personal preference over objectivity and seeing as my extensive research (asking all of my film friends which film they preferred,) offered just one mere mention of Kiki’s Delivery Service, I had to take charge and put it in its rightful place. The charming and rambunctious film about a young witch who loses her powers when she falls in love is brimming with excitable yet head-strong characters, a sardonic black cat, and a fantastic aesthetic. It’s a phenomenal movie with a great message broiling underneath it, all about self-reliance, growing up, and leaving the childhood behind.

If you ever wanted to inspire a whole generation of women then I’d say get them watching Princess Mononoke early on. Yes. Our number one spot for our Ghibli countdown undoubtedly goes to Miyazaki’s ferocious and powerful film. This two our long fantasy epic is not only the best Ghibli film but it is one of the best in the genre. Gloriously dark but enriched with hope and strength, the Ghibli craft is on top form here. The story revolves around the young Emishi warrior who struggles between the forest gods and the humans who consume the resources. Soulful, enriching, and with an elegant score by Joe Hisaishi, this utterly sublime and gorgeous film will grab you, grow you, and augment you.

Princess Mononoke is one of the best films of all time.

What do you think? Do you agree with the list?
Let us know!

WHEN MARNIE WAS THERE IS OUT IN CINEMAS NOW!
READ OUR REVIEW