Well, it’s that moment! Yes folks, Netflix have released the amazing Orange is the New Black which is thankfully in our lives one again. I don’t know about you but I woke up yesterday and danced around in my pyjamas singing Regina Specktor’s “You’ve Got Time,” before emerging myself in that terrific women’s prison again!

So before we binge ourselves on the show, let’s take a look at episode one!

The folks at Litchfield aren’t having the best time, are they? Caputo is running ragged thanks to budget cuts that led to a whole heap of guards walking out. Speaking about walking out, the inmates are relishing in their time bathing in the river and sun that the excitement is about to dissipate when they are rounded up….along with brand new inmates. As the ladies learn of their new roommates – or bunkmates – the hierarchy needs to evolve. Also at Litchfield, Alex is saved by Lolly but now there’s the body of a hitman and it needs to be disposed. 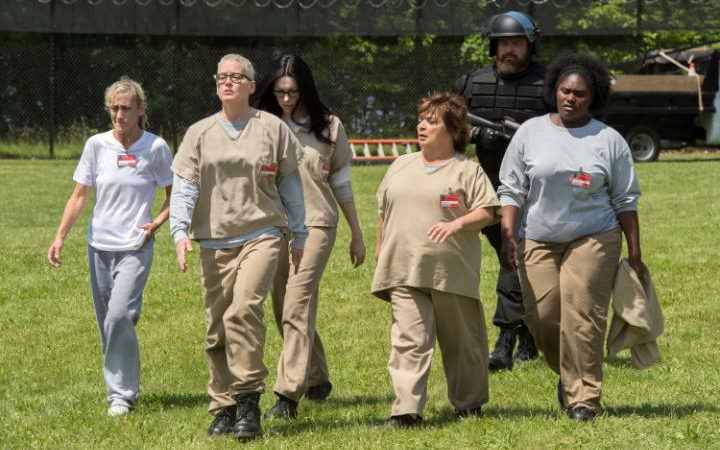 Orange is the New Black returns with a gloriously dark but completely witty episode. The team behind this utterly captivating episode have rejuvenated any cobwebs that may have crept up with season three and chose to relish in the silliness (of the inmates escaping) and the drama of the body. The humour and gore combine to titillate and intrigue, pushing Orange is the New Black back into the pulp of fantastic television shows. Despite the extreme events, this mixture of elements allows the show to continue to feel real, in a sense, and that is phenomenally brilliant.

There are many different highlights within the opening episode of season four, including the aforementioned and peculiar pairing of Vause and Lolly as they try to find a way out of their predicament. Crazy Eyes being the lesser insane one in her blossoming relationship was genius too (hashtag stalker alert) whilst Piper’s new power play is knocked down a few pegs when she realises that folks aren’t actually afraid of her, despite sending her pompadour (her words, not mine) into Max for stealing money. Also, Cindy – a new Jewish convert – is now rooming with (name) – a Muslim) – and instantly, they are arguing about floor space and more. This is the crux of what makes the show so inhabitable, comparing small frustrations and allowing social commentary to weed its way through (this was clearly an echo of Palestine and Israel.)

There’s a lot going on here, and brand new characters to establish which may be tricky as we’re still getting through the stories of the ones already at Litchfield. That being said, the show spins the plates beautifully and the different sides of the women within Litchfield evolve, emote, and excite. With fantastic comedy contrasting the drama, Orange is the New Black is bloody (literally) brilliant within this opening episode and, hopefully, will continue to blossom.

Well, especially as there’s a dead body in the garden shed.

ORANGE IS THE NEW BLACK SEASON 4 IS OUT ON NETFLIX NOW!