From director Can Evrenol comes his first feature film Baskin, which follows a squad of police officers who go through a trap door to Hell when they stumble upon a Black Mass in an abandoned building. The film possesses elements of the horror and fantasy genres, but there’s also something very surrealistic about it too. It’s a very weird film, but most certainly not in a bad way.

In fact, the weirder it gets, the better it gets; the first half of this film has a lot of scenes in which the main characters simply talk, and the even when the ball starts rolling on the plot, it’s still rather boring. This is definitely a film you don’t come to for the story. It honestly feels like a pain to sit through for the most part, and you find yourself waiting for something weird or exciting to happen (Thankfully, they do). In addition, the entire film is very darkly lit, which is of course on purpose and ideally used to effect, however it makes the film a little hard to watch and the drab, dull colours can have a tiring effect on you. 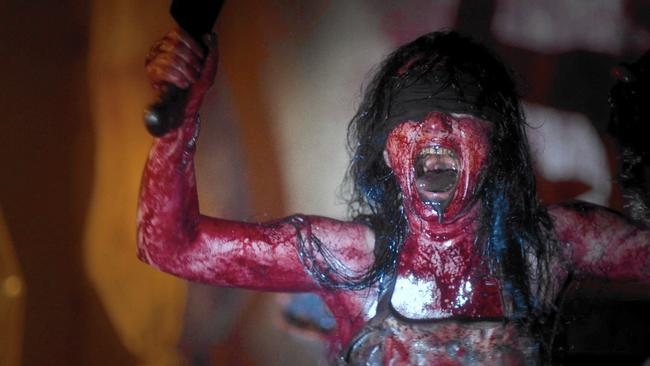 Saying all that, there definitely is a lot to like about this film. In it’s more surreal moments, where weird, inexplicable stuff happens, it’s quite glorious. It’s very uncomfortable, very unnerving and almost off putting, but it adds to the sensation and enthrallment with the film. This is of course complimented by the score, which frequently comes in with heavy, powerful tracks to hammer the point home, the lighting which changes to brighter, more vivid colours that contribute towards that dream like effect and entices the audience more so than the rest of the film does, and the fantastic make up work, which heavily adds to the unsettling nature of the film.

Baskin proves that Can Evrenol is a director with promise. There’s a lot of care that’s gone into this film, and it’s meticulously crafted to be a disorientating experience. As far as debuts go, he’s done an excellent job. The use of camera is superb, allowing the audience to feel like more of a witness to the events going on above all else, and the editing of the film allows for it’s more tense and confusing moments to have their full effect. Evrenol is a man who knows what he’s doing, and after directing so many shorts (Including a shorter version of Baskin), it’s great that he’s started making feature film. It’ll be interesting to see where he goes next, as he could have a very good career in horror.

Baskin is a very hard film to enjoy; it’s pacing and plot leave a lot to be desired, and even if you ignore that, it’s surrealistic nature can be jarring and uncomfortable. Regardless, that’s where the experience of this film lies, and whilst it may not be the most engaging or marvelous film of the year, it’s most definitely note worthy, and good sign that it’s director will be going on to great things.