Remember when Pirates of the Caribbean was exciting? I do. I remember being heading to the cinemas at the age of 14, one of my first cinema experiences, and finding myself overwhelmed with joy. The sea-faring escapade was devilishly good with a terrific villain in Captain Barbosa, special and creepy effects, adventure scenes that are amazing, and Jack Sparrow – a hilarious intoxicated anti-hero pirate who you couldn’t help but love. It was exhilarating and timeless, an enjoyable romp for all ages and one that would stay with me for years after.

Sadly, all of that is ruined in the lacklustre fifth Pirates of the Caribbean film which is pure nautical nonsense.

Salazar’s Revenge is exactly what you’d expected from a fifth Pirates film but all you never wanted: Johnny Depp’s drunken lout Captain Jack Sparrow has found himself in a spot of bother yet again. After losing his ship, his crew, and all his cash, yet again, he winds up selling his magical compass to get drunk, again. This awakens an old dead spirit called Salazar who pursues any pirate ship without mercy until he can get his vengeance on Sparrow. The only way he can escape is to find Poseidon’s Trident with the help of Henry Turner and Carina Smyth, two young’uns inducted into swash-buckling pirate-dom.

Yar, beware, there be spoilers beyond this point!

Salazar’s Revenge is complete and utter tosh, two hours of a strained and repetitive plot, offering nothing new to the franchise. The film consists of all the same elements; a ghostly villain, a drunken Sparrow, some daring escape scenes, and, of course, pirates. The story is a simple premise spread over 130 minutes which, by the way, you’ll watch tick away from your life. The jokes are neither innovative or funny, landing at the bottom of the sea and drowning in the abyss of tedium, whilst the characters are just two dimensional imitations of better ones including (and especially,)  Captain Jack , because what was once an Academy Award nominated character (no, really,) has become an obtuse joke much like Johnny Depp, who has taken to hiding behind his caricatures and fading away from a favourable public eye. There is nothing of interest here, flapping in the wind like a soiled Jolly Roger and jokes stalled like a ship without a sail. Not even the addition of Javier Bardem as the titular, relentless, evil can save the movie, with his lines becoming mumbled garble you’d barely understand. 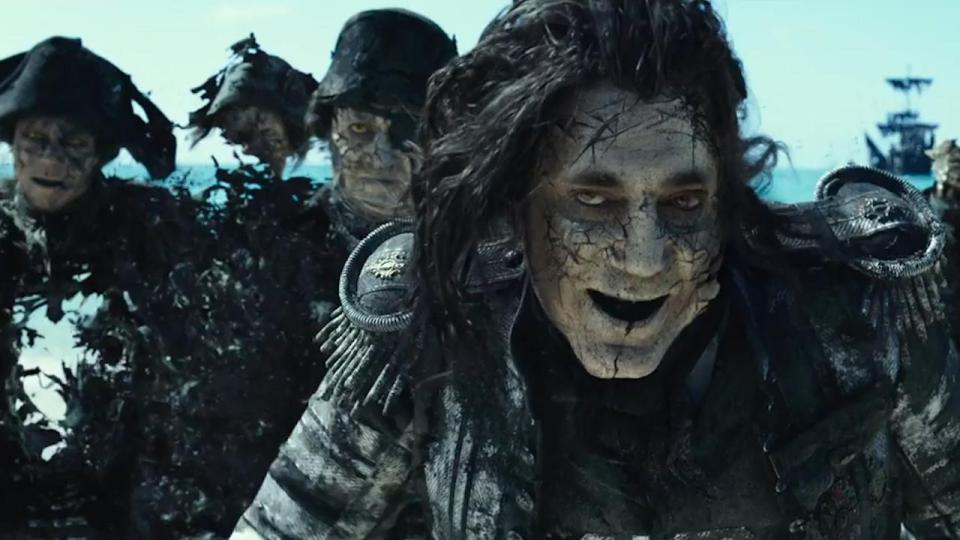 Female representation has become tricky in fantasy adventure movies and it is certainly shocking within Pirates of the Caribbean. Our leading female character Carina, played by Kaya Scodelario, is a head-strong, vibrant woman who likes astrology and can save the day herself, thank you very much. This would be a great character, if Scodelario could fill the roll with a might as fierce as Knightley who’d come before her but she fails to embody Carina and her dialogue delivery falls short, dulled to a monotone. Carina is also forced into a romance with Will Turner’s son Henry and with little to no chemistry throughout the film, this pairing feels off. Secondly, having this limp attempt at a rounded female character is immediately counteracted by having every other woman a stereotype. A “trollop” wooed by Jack, an ugly woman who we all must laugh at for wanting to marry Jack, and a witch in literally two scenes make up the rest of the female cast. Neither of them talk to each other, and, what’s worse, when Keira Knightley returns as Elizabeth Swan, she has zero words. It’s shocking and completely foolish for a film released in 2017. Do better Disney.

Tiring, tedious, and terrible, absolutely no one involved feels like they are having a good time, and you won’t either.

Just because it bares repeating, Salazar’s Revenge will have you begging; “do better Disney.”

Pirates of the Caribbean: Salazar’s Revenge is out May 26th