There’s a live episode of this show, at RuPaul’s DragCon, where one of our leading ladies Katya shoots down the audiences suggestion of binging the entire show over the weekend/day. So, while I watched that, I thought, “I know exactly what I’ll do – I’ll write an entire article about why you absolutely should binge the Youtube series over the weekend.”

So take on the wise words of Katya in that episode, sure (you don’t want to burn up all your love for these ladies after all), but also understand from Episode One of UNHhhh (yes, it’s really called that,) you’ll become hooked like crack.

For those who haven’t watched RuPaul’s Drag Race (and, seriously, what have you been doing with your life?) UNHhhh is a web-series, created by World of Wonder, with Season Seven queens Trixie Mattel and Katya Zamolodchikova who talk about whatever they want, because it’s their show, and not yours. Through the course of roughly 50 episodes (including two live ones,) they divulge into the world of being a drag queen as well as pondering philosophical questions, life stories, and hilarious sex anecdotes. If there is a topic on your mind, there is an episode of UNHhhh to match. Well, for about a minute until it divulges into absolute boisterous mayhem. And it is ge-ni-us.

Imagine this: It’s three o’clock in the morning and the main bout of your drunken evening has ebbed into a tired lull. The house party that has desecrated your flat has dissipated into a handful of your close friends. Lounging around your living room, the night spiralling into morning quicker than before, you’re all pretty much sober but with that alcoholic ache to stay awake. Instead of going to bed, you’re all shooting the shit and the humour is dwindling more bizarrely as the seconds drawl by but it is making you laugh with pure abandonment, hurting your ribs and making you pee just a little bit.  When you all wake tomorrow, filled with headaches nausea, and new in-jokes, your main takeaway would how fucking riotous last night was – though you can never remember exactly why it was so bloody funny, just that it was and you’d do it all again this evening, if you could.

UNHhhh is a spirited debacle that has secured legions of fans simply by being batshit insane. Largely because Trixie and Katya give zero fucks on precision and scripts, dwindling into insanity as soon as the show starts. The big sell is the chemistry and friendship between the leading stars. Despite neither winning RuPaul’s Drag Race (a scandal, I can tell you,) the pair of them have secured a hefty amount of popularity by showcasing sheer uniqueness in their drag personas; Trixie being an actual living doll, whilst Katya is chain-smoking Russian lady of the night. While these are definitely loose descriptions, the main point is that they are both very funny and, more importantly, hysterical together. The repertoire is electric as they uncover moments of their lives, the weirdness of who they are, and, surprisingly, philosophical musings of being.

Of course, despite the lunacy, there are regular features that become part of the show. Highlights include their irreverent metaphorical introductions such as “Hello, I’m the , batty drag names like  Carrie the One, and Trixie’s incomparable RuPaul impression. Still, the main focus of your enjoyment (focus, perhaps, not being the point of the show,) is to see both of them dissolve into bedlam, whether it be the screaming laughter they cause one another to break into, Katya’s limber body contorting all over the place, and both of them walking off when they literally can’t…even. It’s moments like this, so pure in their noise, that captures you into their web.

As professed by the stars of the show, the editing is what chops up what I presume is hours of rambling to a concise show, ranging from 5 to 10 minutes (40 for the live shows at RuPaul’s DragCon.) Chris and Ron behind the scenes add flares to the episodes and gives them an extra level of eccentricity. Their text on the screen, adding their faces to pictures, and immortalising the world “thworp” as the sound a fan makes, this editing makes the show complete. As UNHhhh gets more off-beat and, therefore, more vivacious (the word, not the drag queen,) as those the editing – culminating in one of the funniest things I have seen in recent years, the Green Screen episode where the ladies are superimposed onto the most random things imagination. It’s immense and glorious. 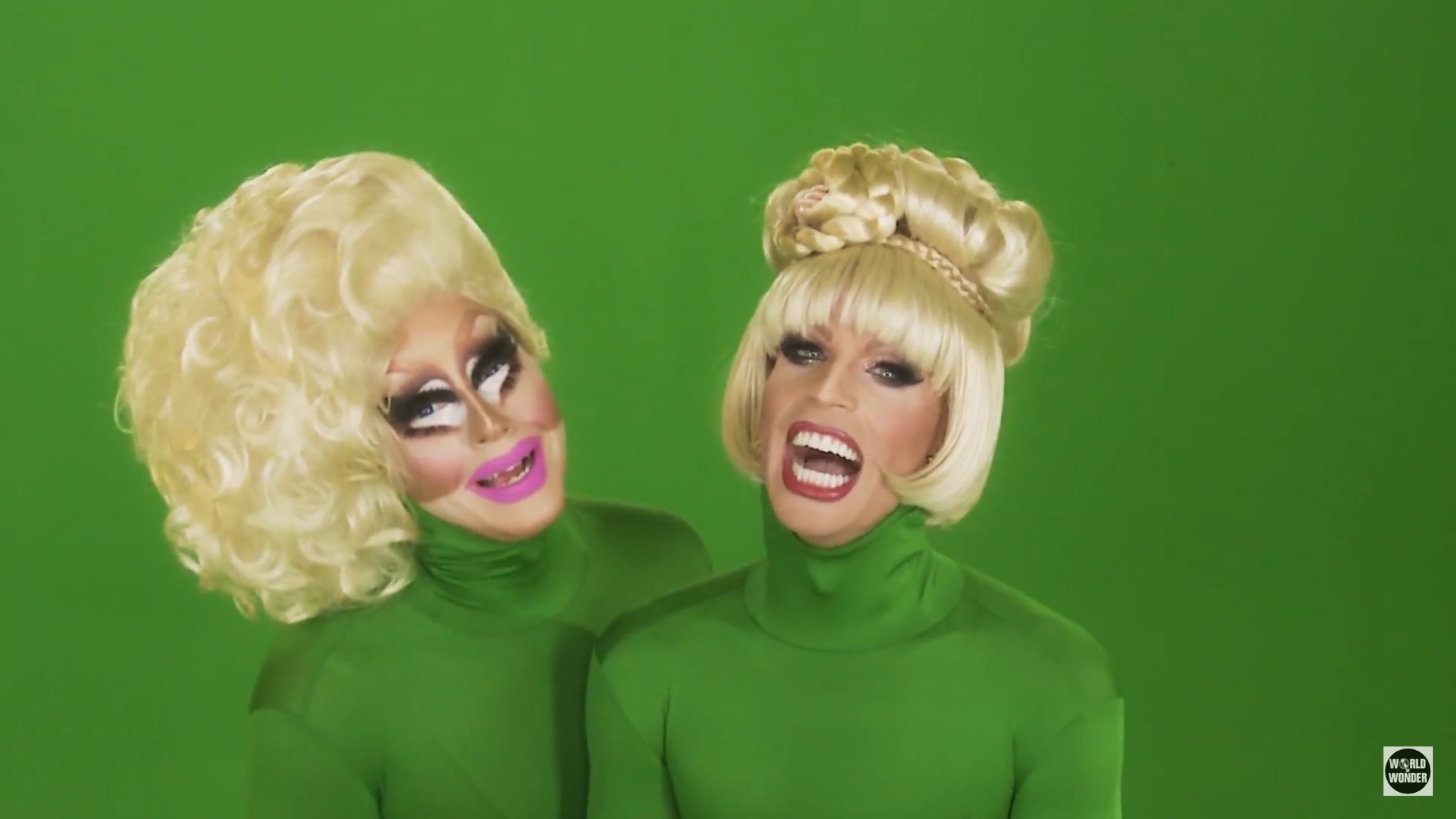 UNHhhh‘s appeal is that the humour is  non-manufactured; it comes from their slightly gauche and ultimately outlandish personalities that work so well together. It’s intelligent, profound, and comical.

Katya and Trixie, on Drag Race, your act went off-line, but with UNHhhh, you streamed to success.

Suscribe to UNHhhh at WOW Presents.