Why do we make films? Why do filmmakers go through the struggle to produce a cinematic ventures? Why do we do it? After all, many, MANY of the films that are being produced yearly never reach a wide audience or lift off the ground. You read anything about directors, writers, and producers behind the scenes, you know that projects fall through and it’s extremely upsetting to see. Why do people put themselves through all that stress? Perhaps the need to change the world, maybe it could be to express their identity artistic, and maybe it’s the hope that cinema as a medium continues, carries on, and is there for future generations.

No. It’s ego. Massive heaps of engorged, pulsating, relentlessness ego and the attempt to appease it. This is often immortalised on the big screen in stirring documentaries and a never ending cycle of ego. Such as Steve McQueen: The Man & Le Mans. 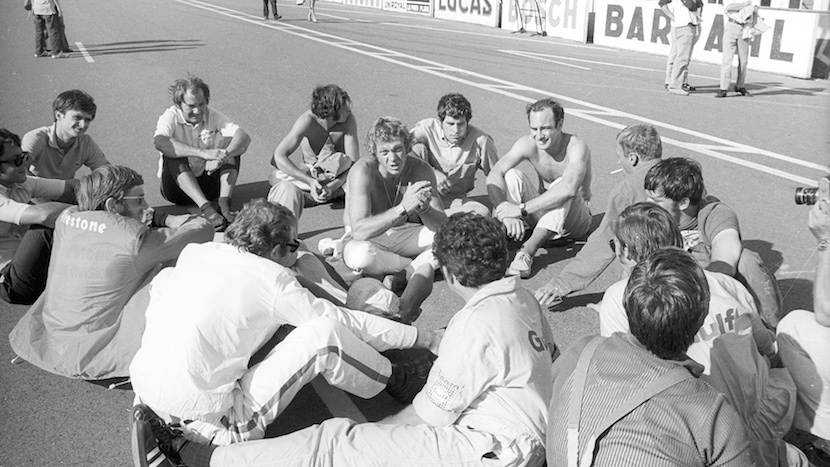 The film revolves around Steve McQueen and his intrepid and ill-fated work on Le Mans. The actor, more acclaimed for his performances in The Thomas Crowne Affair and The Great Escape, poured so much into the project that he became obsessed. Spiralling out of control, drinking and starting an illicit affair, McQueen’s mania (Mans-ia) if you will caused a literal car crash on the big screen, resulting in a legendary terrible film.

Flashing between interviews of the remaining cast and family members who rotated around this film, The Mans & Le Mans is a provocative and profound look that intimately weaves through the increasing compulsion that rapidly festered in McQueen. Often, we glossily look at our old Hollywood stars with this tint of nostalgia forgetting that the film industry of yore was every bit as corrupted, if not more, than the one we have now. McQueen allowed his fame and the bubble it created to get to his head, causing this inflated conceit to ravage him and those around him.

For what it’s worth, McQueen’s determination came initially from passion for the sport that he held so dear but his arrogance cost him. Though there were sparks of kindness and a sense of debt, particularly to stuntmen who were tragically maimed whilst filming, McQueen’s steely and unshakeable need to make this film allowed his marriage to crumble, his professional and personal relationships to waste away, and in the end the film didn’t match the quality of blood, sweat, and tears that went into it.

Gabriel Clarke and John McKenna’s work, juxtaposing behind the scene footage with interviews, and the world of Hollywood, all rolling together crafts a highly engrossing documentary that unfolds another level of McQueen we may not have previously seen. Whilst the film may have been an unmitigated disaster, it is still interesting that this cult like fan-base revere the film so much because of the driving within it. Which makes you think on the power of cinema, I guess.