Forget about Alex Pettyfer in Stormbreaker and please for goodness sake forget about Spy Kids, and welcome in new agent straight from the tailor shop Gary ‘Eggsy’ Unwin. Its 1997, somewhere in the Middle East, as Dire Straits, ‘Money For Nothing’ blasts over the scene we observe three men trying to extract information from a terrorist. Comic book lover Matthew Vaughn’s latest feature, Kingsman: The Secret Service immediately oozes coolness. What quickly emerges is a tactically paced action-adventure that successfully puts the fun back into the spy genre. 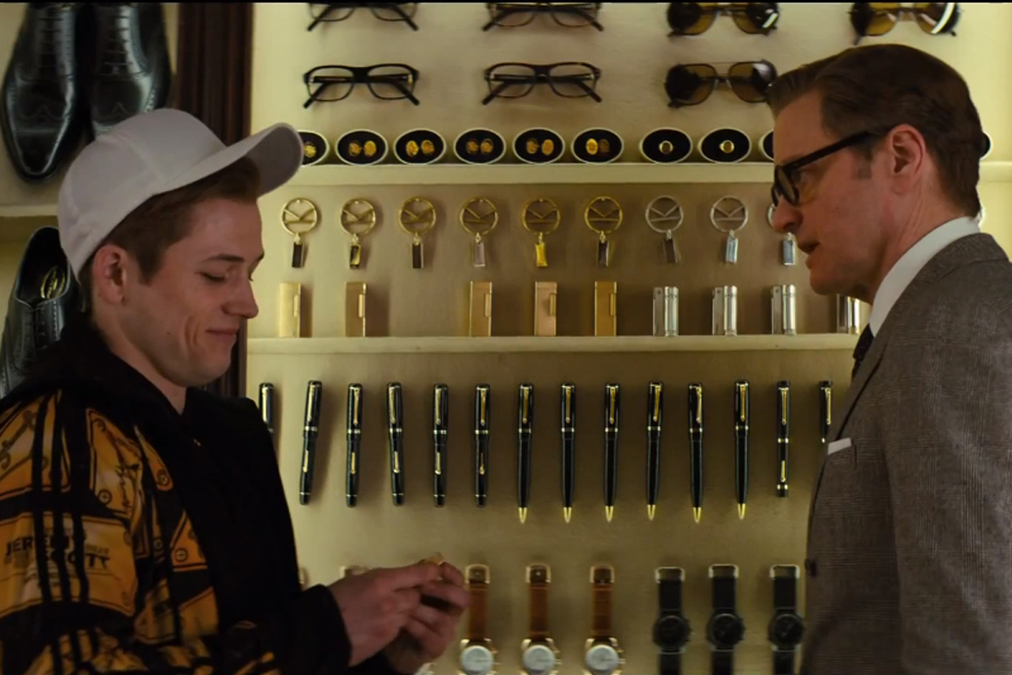 Considering, this is the same director as Layer Cake and Kick-Ass, one can certainly expect the perfect combination of impeccable style alongside ultra-fun violence. After losing an agent in the opening scene, this super-secret organization is in search of someone to fill the boots. Agent Galahad (Firth) chooses an unlikely candidate for this rather Brit – tally ho gentlemen’s club; street kid ‘Eggsy’. Meanwhile, eccentric billionaire Valentine (Samuel L. Jackson), masquerading as a philanthropist threatens to wipe out most of the earth’s population by distracting everyone with free sim cards (good tactic). Naturally, the only ones fit for stopping this man are the Kingsman. A formulaic plot for a spy thriller indeed, but don’t be put off by it.

Working yet again alongside writer colleague Jane Goldman, Vaughn transforms Millar and Gibbons work into something of a live-action feast for the eyes. Action sequences galore. Watching, Firth, Strong and Davenport swing some rather nifty moves makes for highly entertaining viewing. It’s apparent that Firth is having a ball in his first ever action role, leading the screen as the swarve, yet utterly lethal Harry Hart. In fact, Firth looks pretty damn good when having to take on an entire church full of bible-basher’s gone primal. As we see him having to annihilate them outright to the epic sound explosion that is Lynyrd Skynyrd’s ‘Free Bird’ certainly gives the final showdown of Rob Zombie’s intensely gory The Devil’s Reject’s accompanied by the same song a run for its money – or blood should we say.

Newcomer Taron Egerton (Smoke, Lewis) gives confident charm to his ballsy, cobbled together ‘Eggsy’ and moulds perfectly into a bulletproof spy, bespoke suit and all. Considering this is his first feature film role, its apparent Egerton is quickly going to have much more to offer, even if he hasn’t got his trusty pug at this side, JB (Jack Bauer) to ask for help. It’s refreshing to see Strong do so exceptionally well in a comedic role as the hard and husky Merlin, as well as the brief appearance made by Commodore Norrington aka Lancelot, Jack Davenport. As for Jackson, the lisping nut job that is the outlandish arch enemy Valentine – well, if you don’t suffer from infectious laughter whenever the man pops on screen, you seriously need to lighten up. Lending her talents to this genocide plan is the deathly sharp bladed prosthetic leg wearing henchwoman, Gazelle (Sofia Boutella) who pulls off alluring and terrifying rather well. Amongst all the silliness and joking, there is some semblance of a message floating just beneath the pocket squares. Valentine’s character is convinced that humans are like a virus and need to be irradiated in order for the earth to heal itself. Such a message has been at the forefront of so many comics, books and films, most notably such subjects have been explored in depth with Dan Brown’s recent Inferno. Perhaps not the best way to get the point across Valentine, but nice attempt at trying to enlighten us.

This is pure gold. A gloriously British comedy, which may not be to everyone’s taste, however a post-modern slant enhanced this already very tongue-in-cheek production. Expect nothing less than an over the top, slick, sexy and silly spy thriller. Vaughn effectively plays homage to old-fashioned spy films with a take on Tarantino’s brutality, fused with immaculate class.

After all, “We are first and foremost gentlemen”.

Anyone for a Whiskey?

Kingsman: The Golden Circle is out now!
Read our review!