Have you ever been scrolling through Netflix and come across a show that had been bouncing around the outskirts of your radar but never quite hit you with enough intrigue? You know, you see a random Hypable article or Buzzfeed list that tells you “16 Reasons why (insert show name) is your new favourite series” and you shrug with a meh like “I have better things to watch. We’re truly in a golden age of media but we are constantly bombarded by upcoming television shows that you’ll easily dismiss those just off-kilter to your eye-line.

I’m here to tell you not to shrug anything off, because you could be missing out on pure gold. The Good Place nearly fell off my radar but I am so glad it didn’t as it is forkin’ genius.

Landing un-marketed to a UK audience on Netflix, The Good Place stars Kristen Bell, Ted Danson, William Jackson Harper, and, surprisingly, Jameela Jamil. It revolves around Eleanor Shellstrop who is a selfish woman who finds herself in the titular heaven like-place. After a warm introduction to her new blissful home, and being paired up with soulmate Chidi, Eleanor confesses: She’s been confused with someone else and doesn’t belong in The Good Place after leading a pretty terrible life. Much to the chagrin of Chidi, she enlists his help to avoid detection which is tricky thanks to her overbearing neighbour Tahani and her soulmate silent monk Jianyu. It also doesn’t help that Eleanor’s presence is causing disruption to The Good Place itself, making the Architect Michael concerned for the well-being of its citizens. Can Eleanor prove that she belongs in The Good Place?

Created by Michael Schur who brought us the magnificent Parks and Recreation, The Good Place is a 13 episode romp that relishes in its gimmicks and overbearing colourfulness because it has a raucous bite beneath it. Twisting through vibrant set pieces and beaming smiles, The Good Place is insanely unpredictable and entertainingly so.  As the titular heavenly spot becomes to unravel under Eleanor’s presence, the episodes gradually builds with equal parts hilarity and mystery. The sitcom is equal parts Pushing Daisies, Scrubs, and The Prisoner, a blend of 25 minute sitcoms and sci-fi tales. 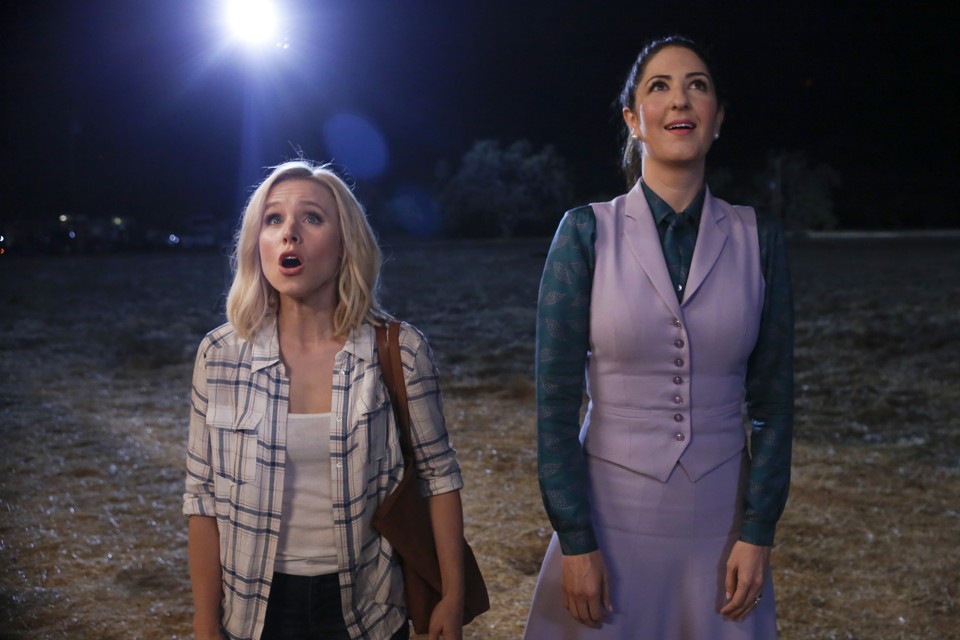 Our lead is actual Disney Princess Kristen Bell is so good as Eleanor, fitting the role perfectly it’s almost like she is just playing herself. Flitting between The Good Place and flashbacks to her old life, it’s easy to see why Eleanor belongs in The Bad Place. This isn’t overdone: She’s not a murderer, she’s just a douche – relishing in her solitude and looking after number one. Conceptually, heaven is a non-swearing, rich, and kind place  for only a select few and the bizarre niceness of the world, conflicting with Eleanor’s foul-mouthed and awful behaviour works sublimely. Enlisting Ethics teacher Chidi to help her brings much fun as Jackson Harper and Bell’s chemistry is on-point whilst Chidi’s own personal anguish starts to filter through to “paradise,” especially as he realises that he isn’t actually spending that time with his true soulmate, only a glitch. Presenter and fashion icon Jameel is insatiable as the other the top British heiress Tahari whilst Manny Jacinto’s Buddhist monk Jianyu develops nicely. But herein lies the brilliance; these character’s aren’t one-dimensional people, they are complex, flawed, and completely human leads.

With Danson as the annoyingly sweet but perplexed Michael running the show and D’Arcy Cardon stealing the show as “computer programme” Janet, The Good Place is a watchable feast that will highly entertain you.

Season 1 is available on Netflix now whilst Season 2 is being episodically released!