Before he cements his image as a snarky, offensive yet reluctant action anti-hero, Ryan Reynolds should take a look at the career of Robert Downey Jr. Yes, Iron Man helped the troubled leading man put behind his substance abuse years in the 1990s way behind him but since 2008, not counting his foray into Sherlock Holmes territory, Downey Jr has been trapped in that iron suit. Kind but cruel.

Reynolds climbed the ‘A’ list when he donned a faux leather onesie in Deadpool, fourth-wall breaking his way to $783 million at the worldwide box office and earning the most complaints against any film released in the UK in 2016. OK, it was 51 complaints to the British Board of Film Classification about the film’s 15 certificate; somewhat palindromic, I cannot help but observe. What does he do for an encore? Sign up for the sequel due out in 2018? Well, yeah. Appear in an Alien rip-off with the title borrowed from an Eddie Murphy-Martin Lawrence prison comedy (Life) – not the smartest. Oh and team up with Samuel L. Jackson in the action comedy, The Hitman’s Bodyguard.

This is a slightly cut-price actioner produced by Avi Lerner (The Expendables, The Big Wedding), who likes to put together stars regardless of the quality of the script. The cast is rounded out by Salma Hayek, Richard E. Grant (in just one scene) Elodie Yung and Gary Oldman, the latter reprising one of those Eastern European bad guy roles I thought he had given up – he tortures accents like his villains torture the good guys, yes? When Lerner has finished paying his actors, there is not much in the budget for a script, visual effects, or one suspects a shooting schedule. But this doesn’t matter because we want to see sparks fly between Reynolds and Jackson, two Alpha Males in a B movie.

Reynolds plays Michael Bryce, a one-time top bodyguard with a Triple A rating, who after losing a client (he protects arms dealers and the like, so don’t weep) is reduced to minding petty crooks. He’s asked to transport ace hitman, Darius Kincaid (Jackson) to The Hague to testify against the Belarussian big time human rights abuser Vladislav Dukhovich (Oldman). Why would Darius do this? To get his wife, Sonia (Hayek) out of prison; she’s a Latina spitfire with a hell of a temper. Dukhovich predictably has connections on the outside who unleash hell in attempt to stop Kincaid and Bryce. Plus Kincaid isn’t keen on his Supernanny; he can handle himself.

You’ve seen this movie before at least once. The Gauntlet (1977), 16 Blocks (2006) and Hot Pursuit (2015) all feature a reluctant witness being escorted by a mostly grumpy cop (or cop substitute) from A to Blah-blah-blah pursued by villains, with the witness running away, yadda, yadda, yadda. You can substitute a cop for a bounty hunter in films like Midnight Run (1988) and The Bounty Hunter (2010). These films stand or fall on the comedy of accommodation, where the witness says ‘I don’t want to go along with what you’re asking me, but just this once…’ Cue a ‘hilarious’ piece of byplay as the couple pretend to be something they are not. You can write these films with a piece of software, complete with predictive sub-text (bromance, fro’-mance, whatever).

The Hitman’s Bodyguard is written by Tom O’Connor and when I saw that name, I thought ‘didn’t he used to host ‘Name That Tune’? (This Tom O’Connor’s previous screenplay credit is the 2012 Bruce Willis film Fire With Fire.) It is screenwriting by travel itinerary, with the action starting in London and going by way of Amsterdam. It’s a movie with a dim view of INTERPOL. Of course, there’s a mole on Dukhovich’s payroll who is feeding his thugs the latest location of Bryce and Kincaid. Of course, the other security detail protecting Kincaid is rubbish. That’s why you have an outsider seeking redemption. 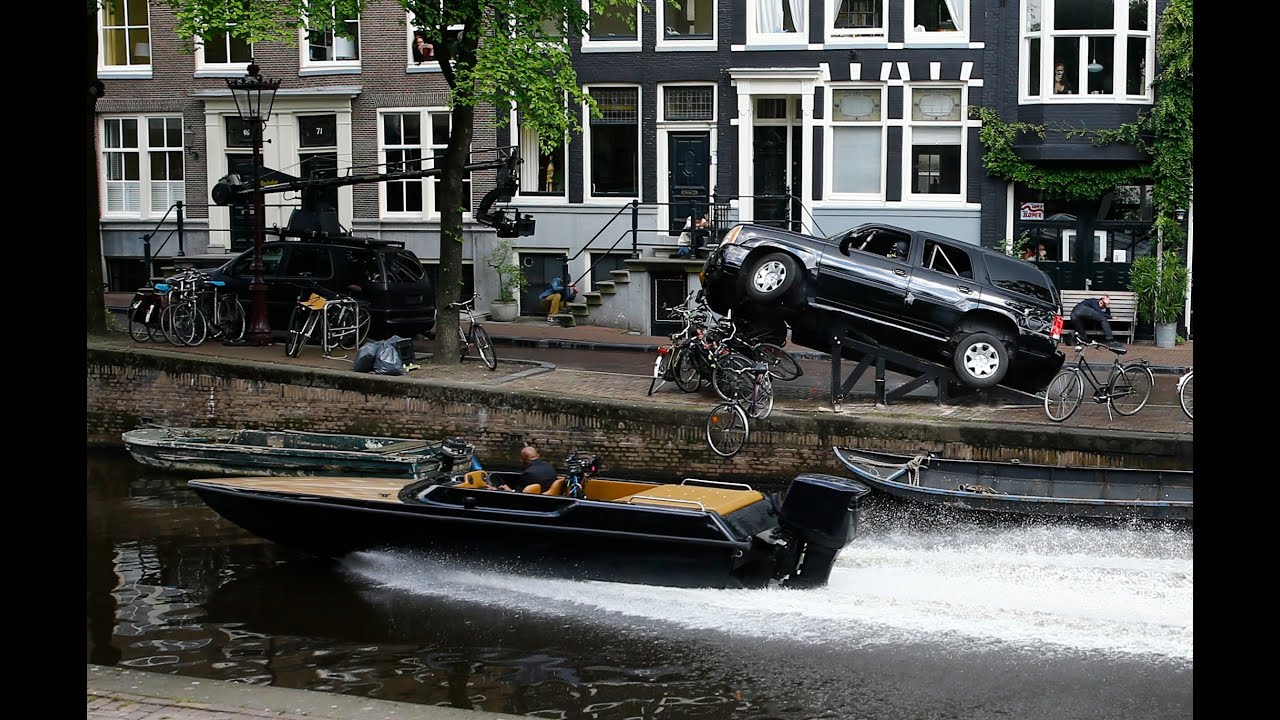 The film has one good plot twist that ups the ante but mostly it is buoyed by the byplay between Bryce and Kincaid, each insisting they know better than the other. The set pieces are mostly forgettable. What lingers is the remarkable lack of racial commentary. It doesn’t matter that Jackson is African-American star as Reynolds is white; race isn’t mentioned once. Each carries the baggage of previous roles, so you know that Jackson can play a mean-ass hitman like the rest of them (see Pulp Fiction) and Reynolds can do sarcastic retort.

But just because race isn’t mentioned, it doesn’t mean that the racial stereotypes shown here (as played by Hayek and Oldman) aren’t offensive. The Hitman’s Bodyguard, directed by Patrick Hughes – his work behind the camera is as anonymous as his name – is a throwback to American cinema with a dismissive view of the rest of the world; it’s ‘America First’ filmmaking at its most predictable. I smiled through patches of it in an ‘it’s better than a colonoscopy’ kind of way. But it does not punch above its tired genre.

One thought on “The Hitman’s Bodyguard – Review”