You know the old Hollywood adage: “If you make something good and successful, rehash it repeatedly until the soul has been sucked out.”

It’s been happening since the fat cats discovered they could make a quick buck from backstories, sequels, and the much forsaken remake. This is not a new thing and, especially for horror, our world has been filled with the fifth, sixth, seventh instalments of beloved original films.

This has been the case for The Texas Chainsaw Massacre. Tobe Hopper’s legendary horror masterpiece that still chills today has had an abundance of re-imaginings since it’s conception. The latest one being Leatherface. 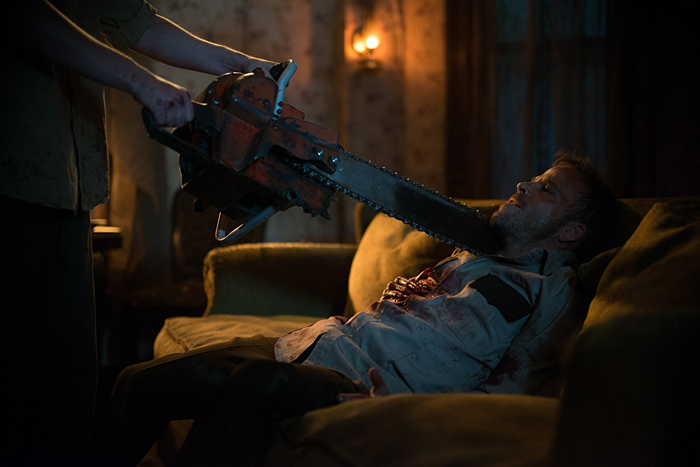 Leatherface revolves around the early days of the Sawyer family and creation of the titular character as a deranged sheriff sets out to avenge his daughters death.

Here’s the rub: Prequels never work. They just don’t. For one thing, if you include characters from films that take place after your entry’s story-line then you’ve killed all the suspense. Which in a horror film is bad because sure, you can grimly chase a suspect or victim down but if you know they are going to crop up in a later part of the tale, you’re hardly going to be fearful for their lives.

Also, with villains such as Leatherface, their secrecy is key to them being a terrifying villain. Similarly to Hannibal Lecter, all mystery is squashed by trying to flesh out their reasoning or rhyme. He doesn’t have to have an explanation or a past; Leatherface is beyond nightmares because he is a dialogue-less character who wears human skin for a fun old mask and kills people without thought. We don’t need to see a mental institute or abuse to understand that this is a monster or evil character. For the film Leatherface, this is a detriment to the overall atmosphere that is somewhat lacking here.

Putting this aside, Leatherface does try to pull itself away from your typical slasher garb. Despite the lacking of suspense, the plot and story-line is necessary to the action, rather than just stacking up the bodies and pouring red stuff all over the screen.

I say just because there are plenty of squirm inducing scenes to make your toes curl and hair stand on edge. It’s grim and curls within your stomach but in a rather clever way.  Fans who like the extreme parts of horror will not be disappointed, this is going to make you sick to your stomach and you are going to love it.

Despite it’s flaws, Leatherface is pretty entertaining and does well with the material it has. Though bogged down by the sheer amazing original that it cannot surpass, Leatherface is highly  visual and engrossing.

Emphasis on the gross.

Leatherface is out on DVD & Blu-Ray now!