Winner of Best Original Screenplay and Best Supporting Actor, Django Unchained was met with a flurry of success. Now five years on, we look at what made the film so popular!

There is no denting that Quentin Tarantino is an artist. His craft may be punchy scripts, dark humour, long haul films and ultra-violence but he is an artist nonetheless. That being said, here he presents his masterpiece, Django Unchained

This western, a clear homage to brilliant but brutal films such as Sam Peckinpah’s The Wild Bunch, is filled to the brim with everything a movie lover would want and more.

The acting is of the highest standards: Jamie Foxx plays it soft as the dignified Django and as his character develops, so does he. It’s an intriguing story and Foxx pulls us in to it, coaxing us to feel his pain and soon urging to taste his vengeance.

But as well as Foxx does, he is simply outdone by Christoph Waltz as the ever eloquent German Dr Schultz. Tarantino admitted that he wrote the part for Waltz and that is clear throughout. Only Waltz could wrap his tongue around such funny dark stuff and deliver an outstanding performance. Much like his turn as Hans Landa in Inglourious Basterds (though certainly a different side of the coin,) Waltz is by far the most magnetic figure up there. Waltz’ charm, charisma and scene stealing lines are just many of the reasons why he is nominated for gold. At the points he isn’t in the film, you actually miss him.

The list of alluring performances doesn’t end there. DiCaprio, in his first completely villainous role ever, is just brilliant as Calvin D Candie. He switches so aptly from the bad but lovable fool to the dark and frightening master. One scene involving a skull and a hammer does intimidate and DiCaprio does not falter. He is of course supported in that villainy by Tarantino legend Samuel L. Jackson, whose bumbling old house keeper Steven is so atrocious and vile. In fact, even the smallest of parts within this movie are grand (except maybe Tarantino’s cameo.) 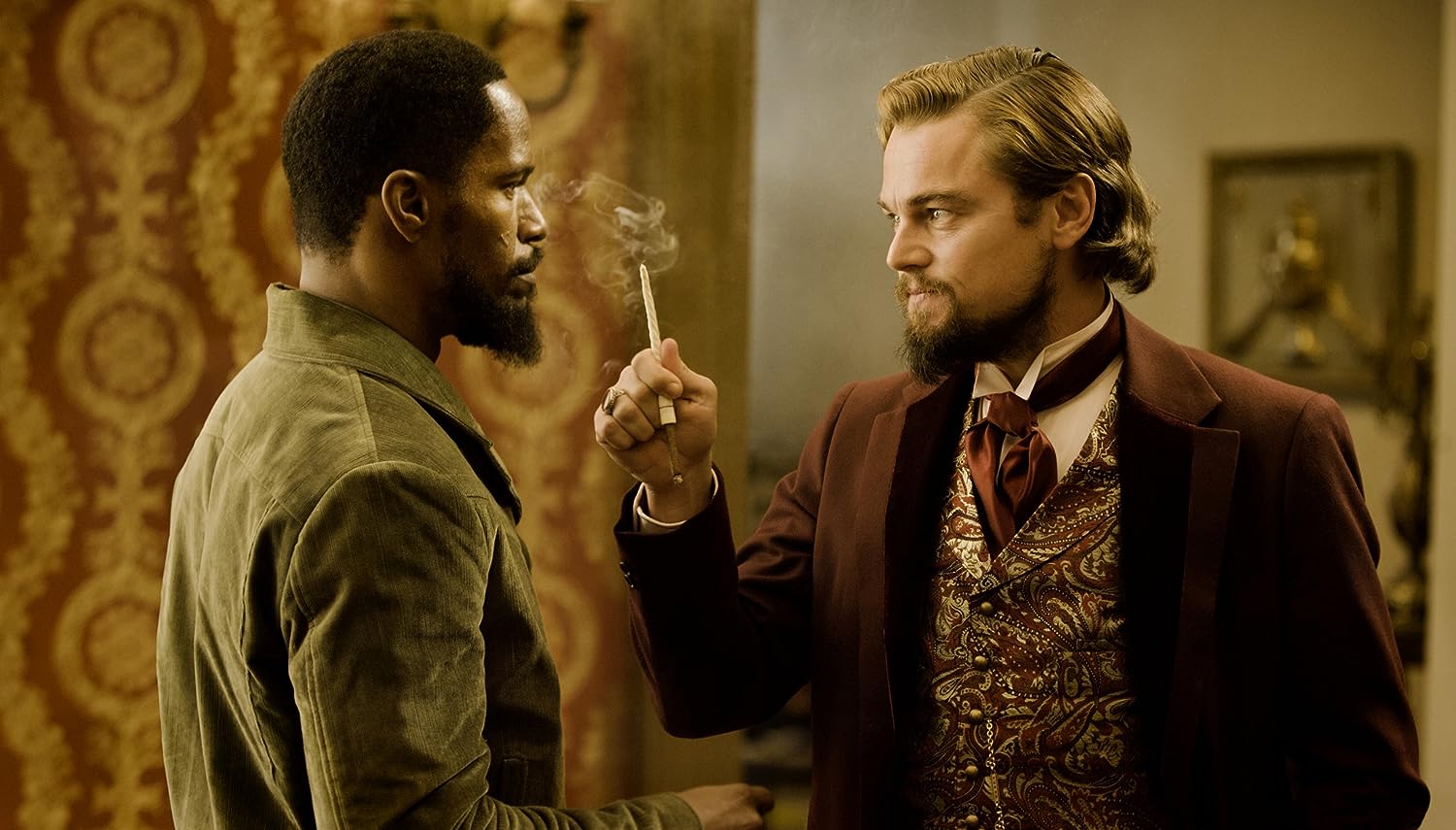 That’s because Tarantino’s screenplay and direction are just that good. Every fine detail within this movie is thoroughly thought out. He times everything to perfection.  He utilises epic scenery and grand vantage points as well as transporting us effectively to the era. There is violence but it is so outrageous that it fits perfectly into the film. The story-line is fresh and full of unforgettable scenes that will leave your heart racing and goose-bumps raised. Like many Tarantino films before, you will soon be quoting as soon as you leave the cinemas. He keeps the laughs plenty; you’ll be extremely high strung to find the scene with bumbling Klu Klux Klan members anything but funny. (Even if the scene seems poignant now)

Yes, there needed to be more Kerry Washington and her presence does provoke criticism of violence against women. Yes, the timing could be shaved.  And yes, it is extremely self-indulgent.

But that is the art of Tarantino. And Tarantino is a fantasist. He delves deep into the heart of all of us and takes that bridled and chained anger and dares show it on the big screen. He gives us a route to escapism that we never thought of because we aren’t allowed to. He knows just exactly how to deliver and what bones to pick. Django took months of painful preparation and the finish product is near perfection. Here Tarantino excels. And because of this, he is one of the greatest artists of our time.

And to that Mr Tarantino, I tip my hat.