I never used to be somebody who could binge watch; I found it stressful, like I was racing to the end of a show as opposed to actually watching it. That changed eventually, where I could watch multiple episodes of a show in a day, as I do now, but full TV Seasons in one day were still a no. It wasn’t until I finally sat down to watch HBO’s Big Little Lies, which I once again expected to take me a week or two, that I felt what others feel when they can’t stop watching. I watched the whole thing in a day, because I simply couldn’t stop.

Someone’s dead; the series opens as one of the biggest community events in Monterey, California is tainted by an untimely passing, and preceding it was the tragic and twisted lives of three privileged but emotionally troubled women (Reese Witherspoon, Nicole Kidman and Shailene Woodley) who found themselves struggling as their children fight, their personalities clash with others, and their pasts haunt them.

I hope I’ve done at least a little bit of justice with that synopsis; truthfully,  Big Little Lies is a far deeper barrel of drama and emotion than I could ever comfortably put into words. Much like many HBO shows, it’s a program that accelerates with every perfect line of dialogue and takes the story exactly where it needs to go. It’s mostly unpredictable, and even the things you can see coming are still exhilarating when they happen, but it’s so easy to forget about the bigger picture in this show because the drama is biting. Watching these powerful women at each other’s throats is intoxicating, but it doesn’t ever push the stereotype of bitchy women hating on each other. These relationships go far deeper than that, and are empowering to say the least. Every twist and turn this show takes is delectable,  enticing and that’s without even mentioning the stunning visuals and the addictive – and I mean addictive – soundtrack that is absolute perfection. 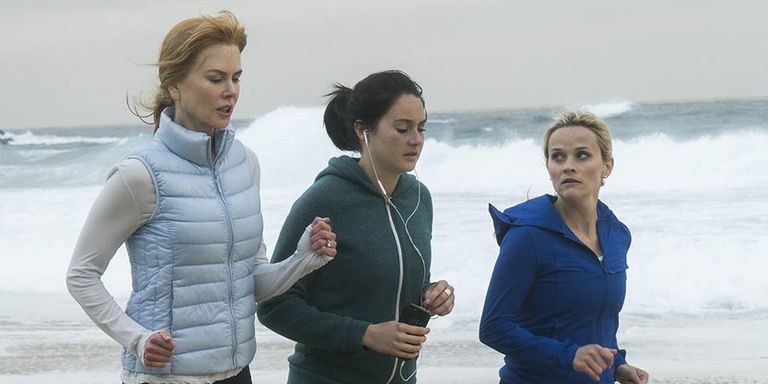 But of course, these biting words would be nothing without a cast of brilliant actors to put the sting and the passion in; the two male leads do an excellent job, with Adam Scott turning in an uncommon dramatic performance that kills it, and Alexander Skaarsgaard delivers in his Emmy winning turn as psychotic Perry Wright. Zoe Kravitz is great – and her performance of Elvis Presley’s Don’t is beautiful – her majesty Laura Dern is electrifying, and Shailene Woodley is out of this world too. Woodley is very talented, and it was always a shame to see it go to waste in films like Divergent, a franchise that wasn’t good enough for it’s talent and fizzled out appropriately. It was her performances in films like The Fault in Our Stars, The Spectacular Now and The Descendants that showcased her talent, and to see her return to glory in a role that’s deeply human and unabashedly broken is fantastic. Now, the most awards have been picked up by Nicole Kidman, and don’t get me wrong, her turn as Celeste is heart wrenching and beautiful. That being said, it is a crime, and I mean an absolute crime that should be punishable by law, that Reese Witherspoon has not picked up a single award for what was easily the best TV performance of last year. I’ve never appreciated her enough; I’m not that familiar with her earlier work and my best knowledge come from her cheesy rom-coms, so imagine how floored I was when she delivered a powerhouse performance in every sense of the word. She is an unstoppable force that tears her way through every single through every word and every scene. She is heart breaking, invigorating, hilarious, infuriating, she’s everything. She is perfect.

Big Little Lies isn’t just the best TV show of 2017, it’s one of the best TV shows of all time. Season two is on the way, and Meryl Streep is joining the cast – I’m actually quite fond of her when she’s not receiving undeserved Oscar nominations – and at just seven episodes long, it’s not asking a lot from you, especially when it’s offering you a television masterpiece.

Big Little Lies is available to watch on DVD, Blu-Ray and digital services.