The Party is a stinging satire written and directed by Sally Potter. A modern drawing-room comedy which like all good guests, doesn’t outstay its welcome. It lasts only 71 minutes, but packs in some short, sharp, shocking swipes before rolling up to a punchline which will bring a wry smile to your face and leave you chuckling on your way home.

A select soiree is being held in a London townhouse owned by Janet (Kristin Scott Thomas), an ambitious politician, and her academic husband Bill (Timothy Spall). The celebration is due to Janet being appointed Shadow Minister for Health – a prestigious position and a stepping stone to the ultimate post of Leader of the Party. 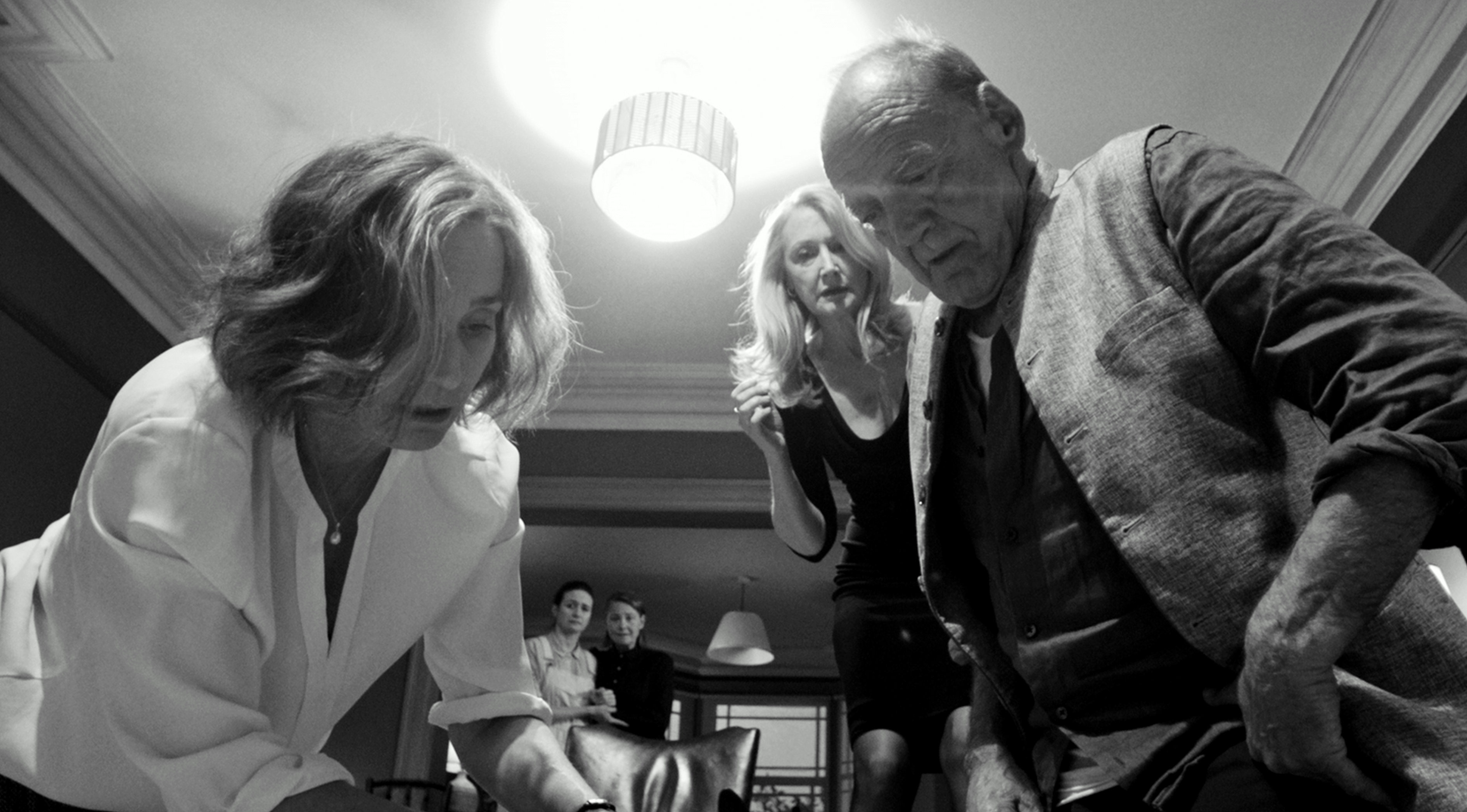 Janet’s guests include old friend Jenny (confidently portrayed by Patricia Clarkson), a witty American cynic, adept at acidic one-liners, and her unlikely partner Gottfried (Bruno Ganz), an aggravating German new-age-guru, who has a stream of advice to cope with any crisis.

They are followed by Martha (Cherry Jones), a fellow academic and old university friend of Bill’s, who is in a lesbian relationship with her young partner Jinny (Emily Mortimer).

The last arrival is Tom (Cillian Murphy, in an uncharacteristically comical vein), a city banker in an expensive suit, who arrives nervy and sweating and proceeds immediately to the bathroom to sniff a goodly amount of cocaine and check his handgun. Tom has apparently been assisting Janet with private-sector partnership initiatives. His famously ‘lovely’ wife Marianne is Janet’s colleague, but is due to arrive at some point later on.

While Janet prepares food in the kitchen, husband Bill sits in the lounge, drinking steadily and only rising from his armchair to choose another vinyl disc to put on his turntable.

Unlucky incidents foreshadow some immanent event – a fox briefly enters through the doors to the garden, a window is smashed by a champagne cork, Janet’s entrée gets burned, and the fire alarm stubbornly continues to sound until silenced by force. Everyone congratulates Janet and raises a toast to her appointment… but then the revelations begin.

Martha’s partner Jinny reveals that she is pregnant with triplets, and Bill, finally emboldened by alcohol, has an announcement of his own which changes the tone of the whole proceedings and results in a torrent of angsty philosophizing from everyone present.

The ensemble offers opinions and platitudes on topics such as idealism versus realism, faith versus science, and conventional medicine versus homeopathy. Gottfried is ever-ready with his personal philosophy that all crises are an opportunity for ‘deep personal transformation’.

The academics, politicos, realists and idealists begin to turn on each other as the revelations, bombshells, accusations and disasters accumulate. The verbal pace becomes frenetic and the action farcical, as everyone’s principles come into question and insecurities and neuroses come to the surface.

The action is starkly lit and shot in black and white by Russian cinematographer Aleksei Rodionov, giving illumination and emphasis to faces, especially in close-up. The Party often feels theatrical, like a one-act play by Simon Gray, Anthony Schaffer or Tom Stoppard. However, it also boasts smart dialogue which scrutinizes bourgeois pretentions and self-obsession and is the most enjoyable film yet from a director who is generally known for anti-mainstream films (such as the adaptation of Virginia Woolf’s Orlando, verse drama Yes and talking-heads piece Rage).

The Party however, proves to be eminently entertaining, intelligent, and absurd, featuring delightfully gleeful performances from a prestige cast.

Filmed as the Brexit result was announced, The Party signifies a gathering of guests, but also indicates an analysis of left-wingers, intellectuals and feminists reappraising their ideals in a seemingly increasingly reactionary, materialistic and venal world. In The Party, Sally Potter entertains us with a farce, while slyly offering a commentary on the current ‘state-of-the-nation’.

The Party is out on DVD & Blu-Ray now!