There’s a cool air. Unlike London, where pollution blankets us truly from the weather, the crisp freeze of Berlin settles in your bones. It’s cold. Not a throwaway statement, when they say “it’s cold,” in Berlin, they truly mean it. The city is a spectacular graffiti coloured world of modern and classic. Buildings of ever era stretch wide along the banks of the Spree, housing citizens of every culture coming to sample it’s history and it’s wild culture. It’s cold, sure. but Berlin is also full of  incomparable life.

In this brisk winter month, the Berlinale Film Festival is underway with a whole heap of spectacular movies including Wes Anderson’s Isle of Dogs and Steven Soderbergh’s Unsane. However, as a special presentation, they showcased Wim Wender’s acclaimed cult film Wings of Desire.

See it in Berlin itself was a spectacular event. 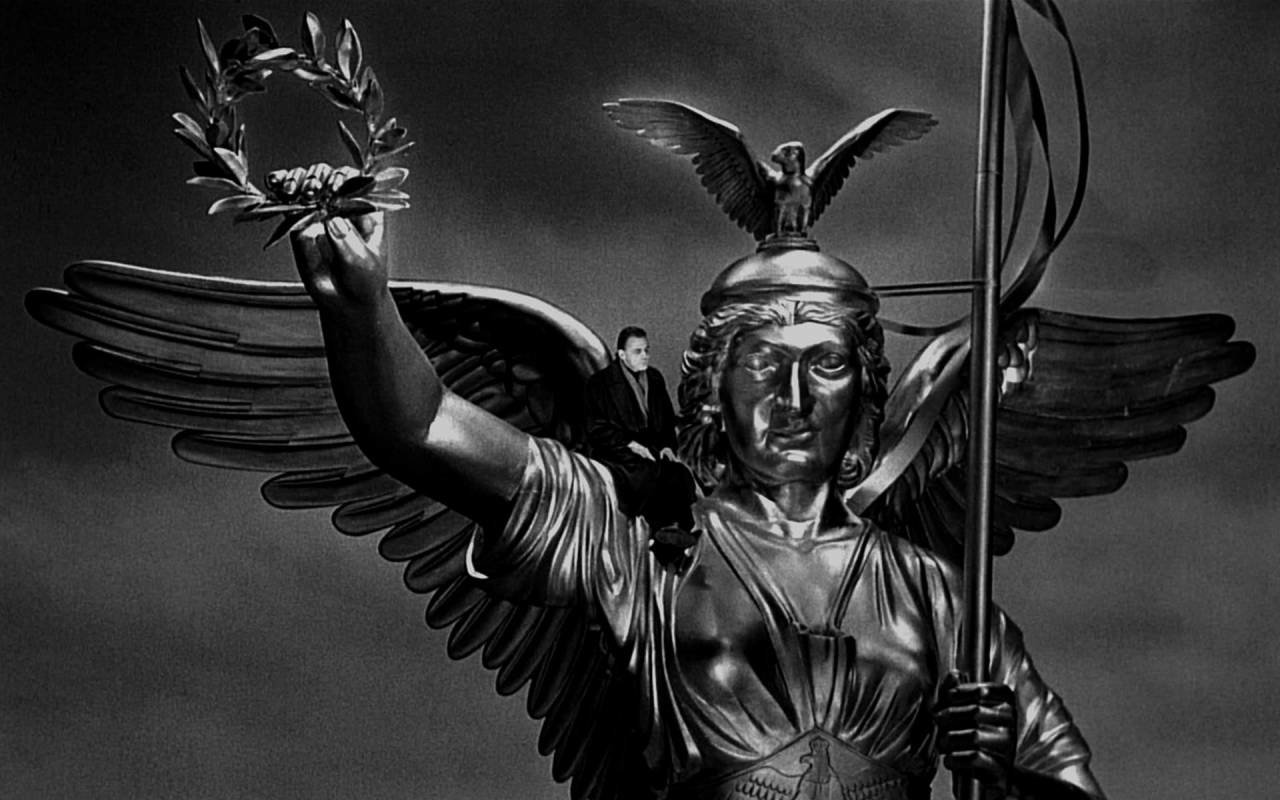 Der Himmel Uber Berlin is set in the titular city, two years before the fall of the Wall. Damiel and Cassiel are the two angels who wonder around listening to the inner thoughts of Berliners and letting their presence known in time of need. When Damiel falls in love with the beautiful yet lonely trapeze artist Marion, he yearns to be a part of her world. As angels are neither scene nor heard (except by children,) Damiel renounces his immortality to be with her.

Wim Wenders directs this striking movie that is a second by second lesson in beauty. The cinematography is astonishing. We, the audience, are drawn into the world the angels live in; they see and feel only black and white. The juxtaposition against the wonderfully vibrant world that humans live in is effective. During the scenes of grey, we feel empty as though thought and feeling has escaped us. So when Damiel enters the world of colours, we too feel the innocence and naivety. Much of this is down to Henri Alekan’s cinematography and it is because of the alluring contrast that the performance are really brought out. And Wenders includes some epic moments in the film, stuff to give you pause. He shoots the film  in a breathtaking way especially a mirror scene, where we watch Marion from within the glass. It encroaches more goosebumps than the Berlin wind itself.

As most of the dialogue is contained in narration (the angel’s listening to the thoughts,) it is up to the actors to truly act. Solveig Dommartin as Marion is simply breath taking as her loneliness etches onto her face and movements. Learning how to trapeze for the film, too, when she flies through the air, you can’t help but fall in love as Damiel did.

YetBruno Ganz’s performance as the child like Damiel that steals the film. Ganz, most famous for his portrayal of Hitler in Downfall, is incredible. He gives our lead naivety as earnest and pure as possible. As Damiel admires the humans and is enraptured with Marion, Ganz gives our angel wings. Without being over the top with his affection, he barely utters lines yet draws us into his quest. Even the supporting roles from Peter Falke playing himself, and Otter Sander as Cassiel are brilliant. The films work is subtle and sends shivers down the spine with the gentle unfolding drama.

Der Himmel Uber Berlin has some incredible lines and moments. Cassiel follows an old war torn poet who remembers previous Berlin whose memoirs contrast against the now divided Berlin.  The inner script of the people we follow really makes the film. It makes us think about those around us. What stories do they have to tell? What heartache are they suffering? In Der Himmel Uber Berlin, the angels are the watchers and only we can change the world.

“They say time heals anything, but what if time is the disease?”

Fall in love with humans again.

Watch Wings of Desire on MUBI!