In You Were Never Really Here, her film adaption of Jonathan Ames 2013 Neo-Noir novella, Lynne Ramsay explores the themes of abuse, violence, trauma and the corruption inherent in the powerful elite. She has re-fashioned the narrative and plot without diminishing its brutal impact, and elevated what might have been a conventional revenge flick by sheer filmmaking skill.

The central antihero Joe, played by Joaquin Phoenix, lives with his elderly mother in the house where he spent his childhood. Joe is a former soldier and law enforcement officer who now works in the murky world of ‘private security’. He specialises in the recovery of runaway teens on behalf of wealthy parents who don’t welcome publicity or wish to involve the authorities. Joe is often hired as much for his reputation for brutality as his efficiency in ‘disappearing’ and leaving no trace of his identity – as if he were ‘never really there’.

Nina has apparently attempted to run away several times before, but this time she has been abducted and trafficked into a paedophile sex ring. Senator Votto charges Joe with rescuing her discreetly, but also requests that Joe should ‘hurt’ those involved in her captivity.

Joe is confident he can find and return Nina, and sets up a meeting with Votto in an anonymous New York hotel where he can hand the girl back. Inevitably, things are not all they seem, and Joe finds himself involved in a conspiracy which puts both Nina and himself in danger.

However, You Were Never Really There is not primarily concerned with the details of the blood-spattered rescue, but rather with the psyche of the man damaged by the violence he has seen and perpetrated.

We gain sudden insights into Joe’s distracted mind. He is prone to flashbacks to an abusive childhood and traumatic incidents when he served in law enforcement and the Marines. His mind is a tangle of memories and regrets, all rendered in short, sharp cuts delivered in Ramsay’s frenetic editing style.

Joe’s scarred frame, disconnected manner and blank stare convey how alienated he feels from regular life and ordinary relationships. He is a survivor, but at his core he also feels his failure at not protecting his mother from abuse at his father’s hands, or saving innocent civilians from being slaughtered during his time in the army –  Joe wasn’t there for them, and his mind has become an arena of failures, real and imaginary. He craves some form of redemption, but doesn’t think it possible.

You Were Never Really Here has been compared to Scorsese’s Taxi Driver, Morel’s Taken and Boorman’s classic Point Blank. Similarly, Ramsay’s film is harsh and graphic in its violence, but it does not revel in the grisly result of Joe brandishing his weapon of choice — a hammer, but rather examines the impact of memory and guilt and how these feed into his subsequent actions.

As mayhem and violence rages outwardly, the film instead ventures inwards, into Joe’s suppressed feelings regarding his abuse and withdrawl. His self-inflicted desensitization covers a wounded soul full of self-loathing. In his pain he seeks self-negation – he doesn’t really want to be here, but ironically, seeking an anodyne in absence is also the reason why he’s able to do what he does. Joe’s absence is his shame and his skill. 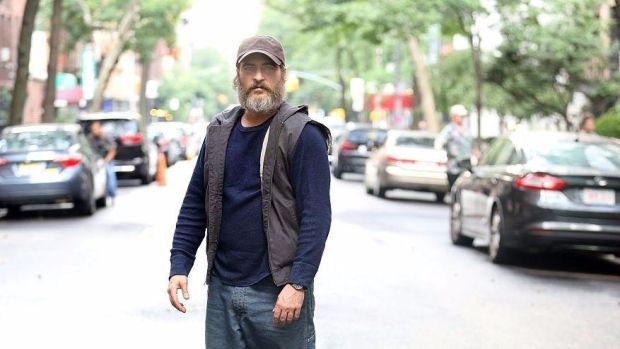 Director Lynne Ramsay has proved adept at choosing sympathetic collaborators. Thomas Townend’s cinematography appears attuned to the mood of the film – escaping into b/w CCTV footage to distance us from the bloodbath as Joe rampages through the house where Nina is being held, using his hammer on anyone in his way. The film has an atmospheric, electronic score by Jonny Greenwood whose discordant elements highlight the inner turmoil of the central character. From her leading man, Joaquin Phoenix, Ramsay has elicited a career-best performance.

The action of the film accelerates and ultimately concludes without necessarily developing in the conventional way. Unexpected moments of poignancy appear in the most unusual of places. In You Were Never Really Here, Ramsay has managed to translate her singular vision into a complex, but compelling, feature film.

You Were Never Really Here is out 9th March!