Modern China makes great play of its gender equality, and International Working Women’s Day or The United Nations Women’s Rights and International Peace Day has been a major celebration in China, focusing on women in all fields, since 1924, when the working women of Guangzhou, influenced by the international movement, started recognition of the date in China. Women united and stood up for their rights across the National and Communist divide, and throughout China’s evolution, iconic images of female fighters holding weapons aloft have become as much a symbol of Feminism as “Rosie the Riveter” in the West. However, the actual implementation of these ideals has been problematic. After the fall of the thousand-year-old imperial patriarchy, it was, and still is, difficult for the modern regime to shake off its mantle of male dominance.

One new form of expression that women are finding a voice in though, is cinema. A vital medium because it’s one of the faces of China with which the world is familiar, to at least some extent, and its lack of millennia old dogma makes it a very influential art form that is flourishing and evolving rapidly within the modern PRC.

Before the 1950s, female involvement in Chinese cinema was limited to acting and costuming, with the exception of a few feminist works scripted by the novelist Eileen Chang, such as the rare post-war comedy Long Live the Wife (1947), and Unending Emotions released in the same year by Wenhua Studio, the more intellectual of studios at the time. After the forming of the People’s Republic in 1949, the state took great care to establish cinema as a form of mass education and placation, sending projection troupes out to even far flung corners to the country to show people films freshly produced by its state controlled studio system. As the masses fell in love with Dian Ying (the Chinese name for film, literally “electric shadows”), the medium became vital too for the dissemination of doctrine.

During the 1950s and 1960s, feminist film was still the pet cause of male directors such as Xie Jin, who were propelled to fame by making films featuring beautiful, gutsy women being emancipated in every way imaginable. One woman though, did emerge from this system, to become China’s first female director, rising through the Ba Yi, or Eight One studios (the official filmmakers of China’s army). Whilst she produced the same type of film as her male peers, focusing, on the Sino-Japanese War and the Communist Revolution, the angle of Wang Ping’s lens was as unique as her position within the industry.

The post-Culural-Revolution era of filmmaking, was one more welcoming of female directors. Although China had opened its doors to the world and to outside influences in the early 1980s, there were few opportunities at the top for women in politics and business, the arts however, provided a cultural space for strong women. Whilst in the arena of televsion, Yang Jie, part of China’s first generation of TV talent, directed the mainland’s very first series of Journey to the West (1986), now considered the definitive version, in cinema, the story of women were beginning to be told, by women.

The Story of Liu Bao Village (1957) presents a sensitive and tender treatment of the love story between a soldier and a village girl. Her spy film The Eternal Signal (1958), tells the tale of two Communist undercover agents who pose as a married couple, and inevitably fall in love. Telling a story of the Resistance and Civil War through the emotional lives of her characters, Wang solicits a more human engagement from the audience, rather than presenting them with the cookie-cutter military heroes that her contemporaries had tended towards. The Eternal Signal is now a cornerstone of classic Chinese cinematic canon, with the story inspiring several further films, and even a long running lavish costume drama in the late 2000s. It has recently been remade as The Secret War last year, starring Hong Kong heavy weight Aaron Kwok in the male lead.

The post-Cultural-Revolution era of filmmaking was one more welcoming of female directors. Although China had opened its doors to the world and to outside influences in the early 1980s, there were few opportunities at the top for women in politics and business. The arts however, provided a cultural space for strong women. In the arena of television, Yang Jie, directed the mainland’s very first series of Journey to the West (1986), now considered the definitive version, and a common point within a generation’s memory. In cinema, female directors were telling their stories to the movie-going public.

In her Youth Trilogy, Zhang Nuanxin explores the theme of lost childhood focusing on the female experience. Taking inspiration from Xie Jin’s renowned Women’s Basketball Play No. 5, a story of patriotism and sportsmanship, Zhang’ own work, Seagull (1981) is a film about coming of age, and finding an identity within an expectant society. Zhang was one of the first mainland directors to adopt the point-of-view narrative,  a pioneering move in Asian cinema at the time. In Sacrificed Youth (1985), she employs a first person voice-over, to tell the story of Li Chun, a young student from the city, sent like millions of her peers, to the countryside for labour and re-education during the Cultural Revolution.

The Yunnan countryside, the culture and customs of the Dai people, come alive through the whimsical imagination of this teenage girl – moments of magical realism see her imagining the 90-year-old woman from her host family as a broom-riding witch; and intimate revelations made to the audience, such as her self-consciousness in the presence of the prettiest and most self-assured young woman in the village.  It is a tale about feminine expectations, archetypes and the changes even they undergo in the rapidly changing society around them. These themes are continued in the urban setting of the last in the trilogy,  Good morning, Beijing (1990), where the pressures of close living and constant company sit at odds with introspection and development.

Whilst Zhang had the freedom to explore her themes openly, directors such as Hu Mei, who co-directed “Army Nurse” (1985), were still under stricter control. Working under Eight One Studios, they needed to shade emotions sensitively and embeded ideas in images carefully, in order for their questioning of women’s place in this ‘equal’ society, and what that society actually expects from them, to skim under the scrutiny of the Film Bureau.

One director though, who was under so much yoke was Huang Shuqin, author of the magnificent Woman, Demon, Human (1987), based on the life of northern opera star Pei Yanling, who challenged tradition and chose to take up male roles in the genre. Considered by many to be China’s first true feminist film, this work relates the tale of a woman who led an independent life, directed by a skilled female filmmaker, telling not just her story but elevates it to a psychological drama about gender and identity. Tuned in to the direction of global cinematography in the late 1970s and early 1980s, Huang draws inspiration from classical Chinese opera, to create new cinematic language, a major shift away from the direct and realist styles of the previous two decades to softer rhetorics involving allegory and temporal fluidity. Huang adopts the dramatic device of play-within-a-play, juxtaposing on-stage and real life tradedy. The on-stage role of Zhong Kui, China’s most popular demon slaying deity who is himself a ghost, is a metaphor for the demonization of our heroine by society for not conforming to her designated gender assigned role. Huang’s use of bright spot-colouring against a background of grim greys and browns, bring out her heroines poignancy and passion. 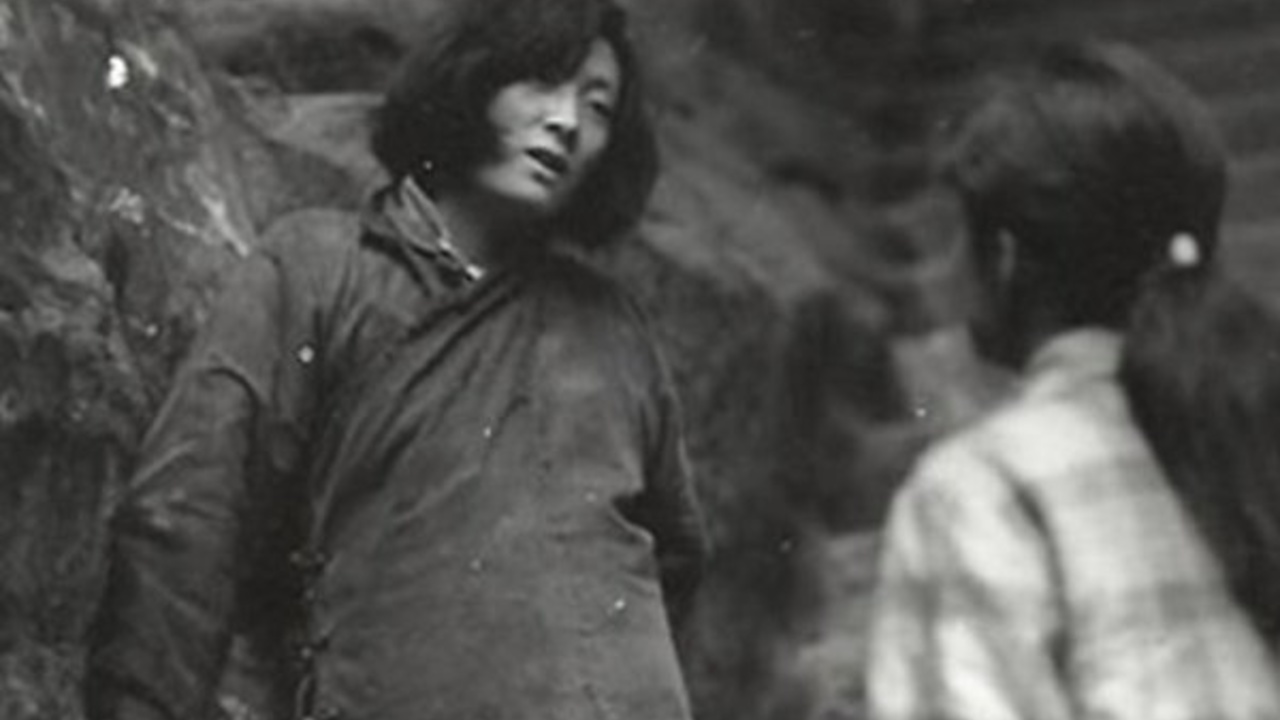 While many of their male counterparts like Chen Kaige and Zhang Yimou earned global patronage and acclaim by “liberating rural women” on screen, female directors were uncovering the very real difficulties faced by women in China. These hardships didn’t end at the city boundaries. Peng Xiaolian’s Women’s Story (1989) is a road movie following three village women who travel from their rural home to the city of Chongqing to make a business out of their home-spun dyed yarn. It explores a whole range of problems encountered by modern Chinese women as a whole, from enforced abortions and discrimination in business, to sexual predation and jealousy. It reveals a society that hasn’t, in some aspects, moved much passed the age of feudalism.

About the Author: Xueting Christine Ni’s life has been an act of cultural translation. Dividing her life between London and Guangzhou, she been promoting Chinese Culture and understanding for the past twelve years. A graduate in English Literature from QMUL (London), and Chinese Literature at CUN (Beijing), she has been delivering talks and creating articles and resources for those interested in China, as well as translating a range of works, from manhua and sci-fi to poetry and documentaries. She is currently engaged in a book on Chinese deities, and acting as culture consultant on three independent video games. She has also written Paper Republic, Glli, London Graphic Network, Resonate Voices and RadiiChina. She currently lives on the outskirts of London with an English partner, and a Bengal cat.