You don’t know exactly how you are going to react when you are placed into an event of extreme stress because it’s down to your body and subconscious to get the hell out of there. Sure, we can pretend that we’d play a mighty hero and rescue as many people as possible before succumbing to a self-sacrificial death that make our films so goddamn good. We’d like to imagine that we’d throw babies and dogs to safety before thinking about ourselves but the truth is humanity sucks at being heroes. Our main drive is self-preservation and that’s OK! We all have to survive somehow.

But what about your own children? Your own family? Your own loved ones? Would you save your own life over theirs? 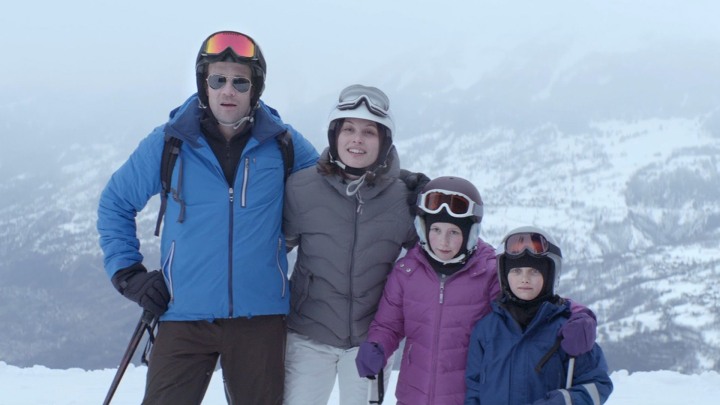 That’s the major conflict in Force Majeure.  The film revolve around Tomas, Edda, and their two adorable children – Henry and Vera. The family are enjoying skiing trip in the Swiss Alps and everything is going fine until a controlled avalanche takes place near their resort as they are breakfasting on the balcony. Though it is relatively safe, it looks dangerous and when the white fog starts to encompass them. Panicking, Tomas runs away from his family, leaving them to save themselves. When all returns to normal, Edda is disgruntled at Tomas’ actions, creating a tense and strained atmosphere…

Force Majeure is an uncomfortable and awkward watch as Tomas and Edda navigate the fall out of the former’s actions. The unfolding story is a brisk, emotional, and taut experience that makes you squirm with the conflicting thoughts of your own reactions. Director and writer Ruben Ostlund masterfully creates a piece that is deep in meaning and sentiments as well as the pain on confronting your inner instinct. A tentative piece that connects with your obstinate places really quickly, the sublime cinematography adds a chilling place for a cold, emotional, and analytical piece, stirring all sorts of skirmishes within you.

Helming the piece, the performances are really engrossing. Johannes Bah Kuhnke is spectacular as Tomas, particularly as his post-adrenaline thoughts that cloud his judgement, believing that he didn’t actually run away from his family. As he is forced to be honest with his actions, he slowly breaks down and the remorse ripples around his family unit and the friends he meets. Equally, Lisa Loven Kongsli is stellar as Ebba, who becomes immediately disjointed around her husband after watching him abscond without her or their children. Her quiet rage is a brilliant unfurling anger that never relents until Tomas proves himself as an adequate father and carer. As they fight and argue, in this unbelievably palpable tense moments, Force Majeure becomes an exquisite portrayal of humanity at its emotional edge. Force Majeure was Sweden’s entry for Foreign Language film at last year’s Academy Awards but failed to make the nominations. There is absolutely no reason for the Academy to have ignored this film unless the other films were exceptional. This is an involving and engrossing film that hits you right in the squiffy parts of your stomach.

But maybe Force Majeure made them all uncomfortable. Like really uncomfortable. It’ll make your toes curl and a wave of gaucheness smog over you like a controlled avalanche.

The Square is out now!