We’ve seen this movie before: a disfigured child struggles to find acceptance but bonds with [complete the blank]. From Mask, the 1985 film starring Eric Stoltz as Rocky Dennis, a child brought up with a skull deformity raised by his biker mom (Cher) to Penelope (2006), in which Christina Ricci (The Addams Family) played a young woman with the nose of a pig, the genre comes with a familiar message of appreciating people for who they are regardless of class, ethnicity, disability (or different ability), size, sexuality or in the case of the upcoming Permanent, bad hair.

Wonder, adapted from the 2012 novel by Rachel J Palacio and starring Jacob Tremblay as August ‘Auggie’ Pullman, a boy with a genetic deformity that has distorted his face and led to him being home schooled by his mom (Julia Roberts) but finally entering fifth grade for the first time, is different. The story is told from multiple perspectives, from Auggie himself to his big sister Via (Izabela Vidovic) to his new best friend Jack Will (Noah Jupe) to his sister’s best friend, Miranda (Danielle Rose Russell).

It still plays that familiar card of giving the ‘different’ kid a special ability – he’s great at science. So when there is a science fair, we know who will win. The multiple viewpoints allows for multiple climaxes, so there isn’t just one tear-jerking moment, but four of them.

As Isabel Pullman, Roberts doesn’t have much to do except play the all-American self-sacrificing mom, who put her dissertation on hold – symbolised by a floppy disc – to raise her family. As dad, Owen Wilson offers light relief as well as genuine gratitude that he is in a movie married to a woman who was once the world’s number one movie star. This primarily is about children, and has the ensemble feel of a superhero movie, one in which a Star Wars character turns up in a cameo – the film capitalises on anticipation for Episode VIII – The Last Jedi. 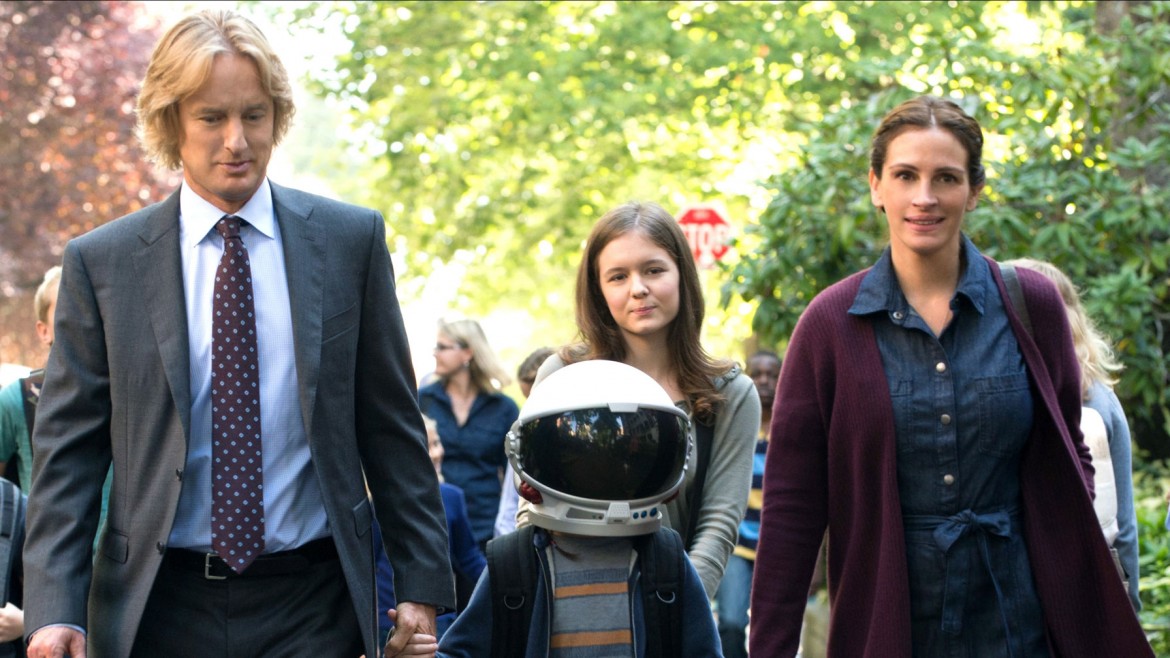 But co-writer (with Steven Conrad and Britain’s Jack Thorne) and director Stephen Chbosky (The Perks of a Wallflower) misses a trick, by not tackling the source of bullying. Bullying is as endemic to American society as the right to bear arms. It is built into the ruthless individualism of the culture, which objectifies the opponent to justify the rightness of winning. It is the culture that brought us ‘America First’ and Donald Trump rather than community values which have reacted to it, when bullying has gone too far. Yes, the film skilfully allows us to enjoy the mini-triumphs – all four of them, and gosh, I wept buckets. What didn’t do is imagine America abandoning individualism for a ‘more perfect union’. Audiences can cry and keep their guns locked and loaded.

Wonder is out on DVD & Blu-Ray now!