It is probably best not to tell you too much about Marlina The Murderer in Four Acts, the third feature from Indonesian director Mouly Surya. It tells the story of a widow farmer, Marlina (Marsha Timothy) who is visited one day by an old man on a motorcycle, Markus (Egi Fedly), who tells her that he and his six buddies are going to steal all her livestock – ten goats, ten pigs, some cows and chickens. Then his gang will take turns to rape her. ‘Oh, I’m your guest – can you cook me something?’ Marlina has already endured a double tragedy. Her son, Topan, died still born eight months into her pregnancy. Her late husband, whom she initially told Markus will be back at any moment, sits wrapped in a shawl in the corner of the room – she cannot afford to bury him. Marlina stands in the kitchen of her remote farm house, far from help – the opening establishes just how cut off she is (it was filmed in Sumba) – and ponders. She takes the only action available to her for survival, which I won’t spoil, and then attempts to do the right thing.

The film does not have the story beats of a traditional rape revenge drama. The setting makes it extraordinary. Indonesia’s recent past is marked by repression and genocide, in particular the systematic killing of one million Communists that began in 1965. The country only took steps towards democracy after the end of the 31 year rule (from 1967 to 1998) of President Suharto. Although there was limited freedom of expression under Suharto’s presidency, Indonesian cinema persisted, notably the 1973 film, Bulan di Atas Kuburan or Moon Over The Graveyard. Most of us will only be aware of Indonesia on film from Peter Weir’s 1983 film, The Year of Living Dangerously, starring Mel Gibson and an Oscar-winning Linda Hunt, Gareth Huw Evans’ 2011 police thriller, The Raid and its sequel and Joshua Oppenheimer’s powerful 2012 documentary, The Act of Killing.

In his book, ‘Indonesian Cinema’, first published in 1991, Karl Heider pointed out the difference between Indonesian and Hollywood cinema. In Indonesian films, ‘good guys do not win, bad guys are not punished, and individuals do not reach a new self awareness’. In other words, these films reflected reality. 25 years on, we see the remnants of this sensibility in Surya’s film.

Marlina is not a conventional heroine, but she is a matter-of-fact one. There is some ambiguity as to how her husband died – Marlina keeps poisoned berries in her drawer. Violence in the movie is swift and graphic but also filmed from a distance – most of the film is in medium or long shots. It is also accompanied by a sense of melancholy, a headless corpse playing a lute that Marlina burned that only she – and the audience – see.

In many ways, Marlina has a traditional narrative structure around death and (re) birth, symbolised, very literally, by Marlina’s friend, Novi (Dea Panendra), who is ten months pregnant and in search of her negligent and superstitious husband, Umbu, who believes that his wife will have a breech birth and is therefore a woman of loose morals. Novi does explain to Marlina how she really went for her husband in her second month. However, she has never been unfaithful.

The third woman of the picture is an aunt who is on her way to her nephew’s wedding with two horses to complete a dowry – without them the marriage will be called off. She boards a truck in spite of seeing Marlina holding a sword to the driver’s neck – she has more important things to worry about. 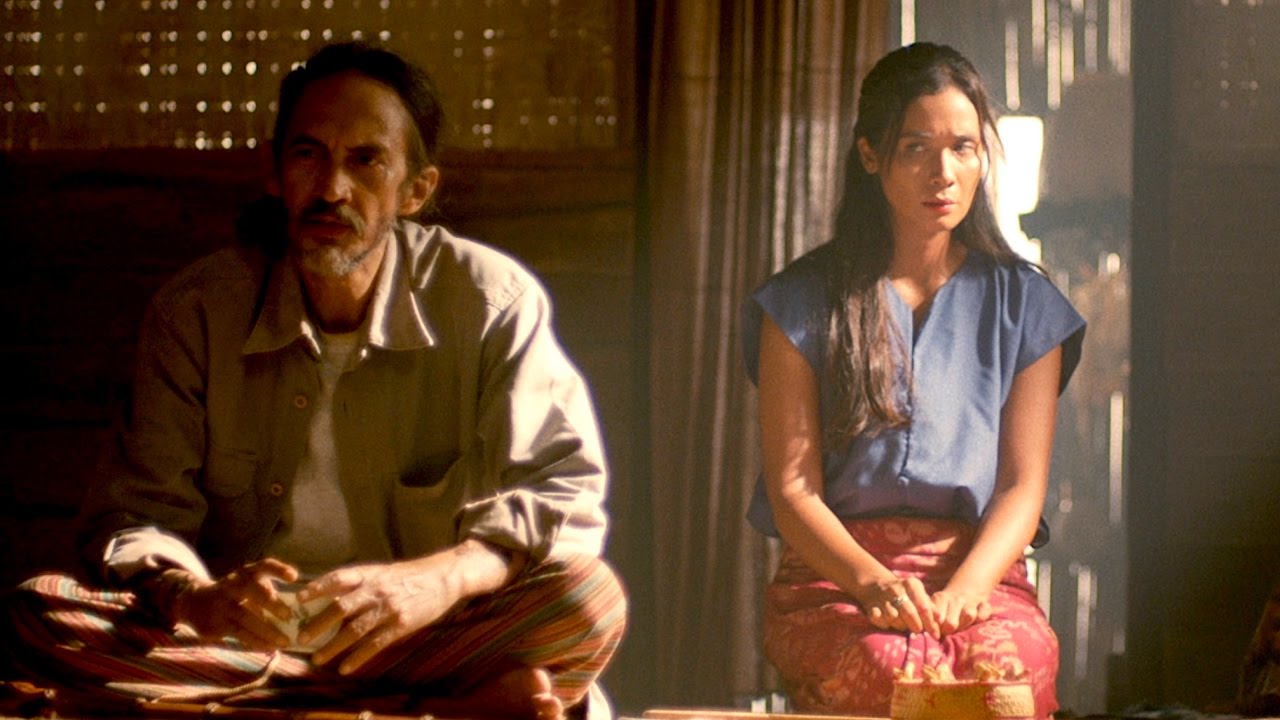 The fourth woman is a young girl, Topan, who was given a boy’s name so she can be as strong as one. She serves Marlina her father’s ‘famous’ Chicken Satay. She reminds Marlina of the child she lost, of the motherhood that superficially at least will never be hers.

It is unclear when the film is set but it exists between two eras. Novi has a mobile phone but the police still use typewriters. A scene in a police station in which Marlina is made to wait, watching instead three officers playing ping pong, illustrates a lackadaisical attitude to law and order – the police do not have the equipment or the officers to investigate the crime against Marlina immediately.

The ending suggests an alternative to the misogyny of Indonesian society. Yet moments of ambiguity exists. When four men waiting in Marlina’s front room for something to eat (and then to abuse her) first sees her, one of them stands up and holds her hand for the longest time. The gesture falls somewhere between the courtly and the obscene.

Surya doesn’t glamorise violence – indeed at one point she makes a deliberate continuity error to illustrate how Marlina has to avert her gaze from the action that she is forced into. It is also significant that the only crying that we hear comes from men.

In short, Marlina The Murderer in Four Acts is an extraordinary film, an example of a cinema somewhere between Indian parallel cinema and a ghost story, that has a percolating effect in the memory. See it – and give it time to sink in afterwards.