There’s an episode in How I Met Your Mother where the characters start to realise annoying traits about one another. These are characteristics that have always been there but have been closed off from your mind. As though your love for them outweighs their faults, then someone shines a massive beacon-like spotlight that exaggerates flaws. The glass breaks, the truth is out, and you can never look at that some person in the same way.

I speak about How I Met Your Mother in the opening to Legion because this happened to me recently. I have adored, loved, and earnestly frothed at the mouth to anyone who will listen about the FX series. However, recently, I saw someone point out that it tries too hard to be bizarre and weird. Just like that the glass was broken. Smash. 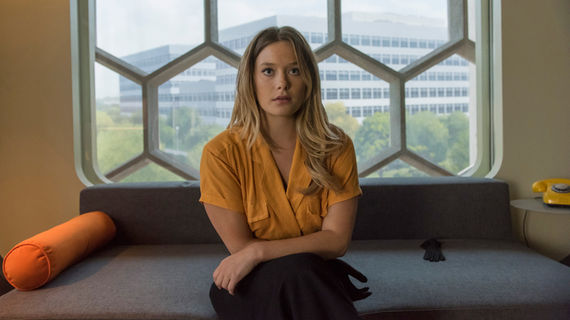 Now I am not saying this takes away from the superb first season because I believe the surreal elements had purpose, had depth and mirrored David’s psyche impeccably.

However, with the opening episode of Season 2, this has become more apparent with my now scrutinising eye.

Season 2 (this episode called Chapter 9) picks up a year after David was zapped into an orb. The time shift is unbeknownst to him, the incident happening merely yesterday. The others, however, have made home at Division 3, a seemingly weird government facility where David is being studied. Unsure how to navigate the time lost, and people not believing his amnesia, David becomes aware that Foruk, the Shadow King, is racing to find his original body whilst possessing Oliver’s. If that happens, it could mean worldwide devastation…

There’s a lot to process with this latest episode as the time jump, though merely a year, gives us a lot of mystery. There’s exposition to get through as well as the unexplained. It’s irritating that there is a lot of distrust in David, which causes friction for him and Syd, but with this annoyance, comes this air of intrigue: How much can we actually trust this character having seen the world from his perspective the whole time? This sets of a really interesting path for the season to follow.

Acting-wise, the show continues to excel with Dan Stevens coming into his own with David Haller. His bewilderment mixed with power and the torment he supposedly left behind enriches this lead and causes a lot of interest.

But let’s get too it: The bizarre elements of Legion feel mismatched with the emotion. Noah Hawley and his team have created lavish set designs, wonderful costuming, and crafted a dance sequence that I could watch every day until I die and then die happy, but there is something just off centre for this opening. There are parts that feel remiss, shoved in characters with over-the-top outfits and situations that don’t seem to have any connection to the show whatsoever.

I suppose I get it – that this will slowly unravel and make sense as we follow David through this h. But whilst Season 1 had grounding for its imaginative dream-scape, Chapter 9 lacks that layering.