As a Brit, it’s fair to say, besides Aardman, we do not have the largest visibility in terms of feature film animations. A long TV history and admiral legacy, that many have drawn from, the film animation industry is dominated by the likes of Disney, Pixar, Dreamworks and Studio Ghibli.

With the big companies hogging the spotlight, it is great to have an animation studio closer to home to brag about. Cartoon Saloon may only be on their third feature film (alongside two TV shows) but already they are making a name for themselves through beautiful storytelling and traditional animation. 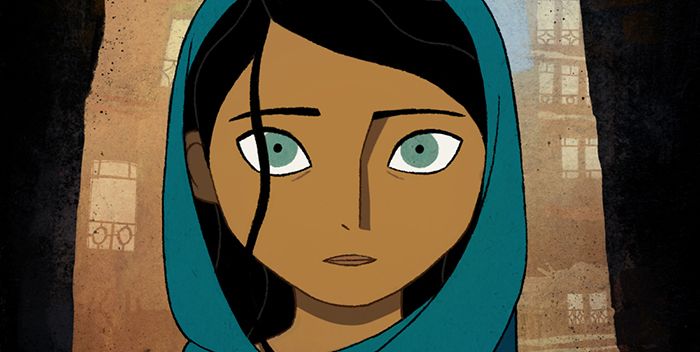 Not since Laika and Pixar has an animation studio produced such accomplished work in its debut and kept going strong. After the initial success of classics The Secret of Kells and Song of the Sea, it was hard to believe that the studio could strike it lucky with their third feature.

Despite a more grounded and even gritty subject matter, the studio have produced a beautiful, powerful and inspiration feature. Centered on a young girl, born into a world that tries to devalue her. The Breadwinner is a testament of the strength and courage of women and girls.

Set in Taliban occupied Afghanistan, young Parvana lives with her Father, Mother, Sister and baby Brother. When a boy yells at her for being seen in public, her disabled father defends her and is sent to prison for doing so. With no of-age male in the family, leaving the house and earning money become impossible tasks. To provide for her family, Parvana cuts her hair and posses as a boy. Her new identity gives her a freedom she has never known but can her new persona protect her family and reunite her with her banished father?

The film is directed by Nora Twomey, based on the book of the same name by Deborah Ellis. For her novel Ellis interviewed women and girls in refugee camps and combined their stories. Tomm Moore, (director of Song of Sea and Cartoon Saloon co-founder) produced the film alongeside Hollywood actress Angelina Jolie.

Despite the film’s wonder filled aesthetic, this is not a film for the very young. The Breadwinner is a harsh, gritty and at times heart breaking tale. Circumstance and abuse of culture leave the central characters in horrific predicaments, with little chance of escape. Although, the film is a powerful tale of the strength, courage and resilience of women and girls. It never shys away from the harsh realities of misogyny and places them in the struggles of a few characters.

The film displays the beauty and history of an Eastern culture, while also displaying how it has been corrupted by individuals for their own gains. Themes of honour, gender inequality and marriage are all explored. The narrative itself praises the essence of storytelling by letting its characters tell tales and fables of their own. Parvana recounts ancient quests and God Kings to her family and friends, as a way of escaping her everyday life.

Hand drawn animation may have been abandoned by the major Western studios but this only adds to the films unique appeal. Detailed and full of depth, the studios style gives life to it’s characters and its beautiful, if dangerous setting.

Alongside the classic animation, more ridged visuals and paper cutouts are used for the storytelling sequences. This gives the film a more surreal feel. The mystical storytelling provides an escape for the characters as well as the audience. Myths and legends contrast the realities of the characters and delves into the culture of the setting.

It is a sad fact that despite studios claiming to care about diversity and visibility, a majority non-white cast is a rarity. Even if the characters are meant to be ethnic minorities, studios awfully white-wash in-front and behind the camera. Here the entire central cast are of Asian heritage. This should be the standard but it’s rarity is a cause for celebration when actually done.

The cast are led by the emotional and courageous voice of Saara Chaudry as Parvana. Never afraid to question her surroundings and willing to do whatever it takes to protect those she loves. She is a powerful example of what young women go through and what they are capable of. A strong mention must also go to Ali Badshah as Parvana’s father Nurullah. With male family heads often linked to honour and patriarch, it is refreshing to have a warm and loving father figure. Proud of his inquisitive young daughter while encouraging and defending her. His performance is one of love and audiences will long for the pair to be reunited once again. 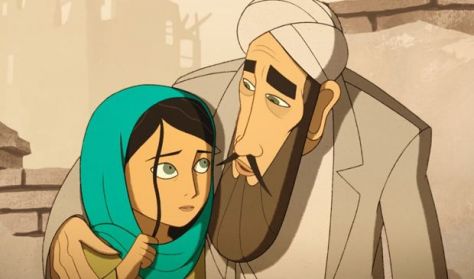 The Breadwinner confirms small Irish Studio Cartoon Saloon as one of most original, creative and certainly most relevant animation studios working today. A poignant, heartfelt and emotionally driven story of a young girls courage, in a world that devalues her. This is the kind of film young girls and boys, need to see and the stories that deserve our attention.