Barbara Thorson (Madison Wolfe) has issues. She has no friends at school and she is being raised by her sister, which means her home life is a little chaotic. But Barbara has a bigger problem. If she doesn’t maintain the rune spells and traps she’s set up around her home and her town, giants will come to destroy everything and everyone around her.

While Barbara believes wholeheartedly in the giants that threaten her life and community, we realise that they might be a mask for some insurmountable problem that she can’t bear to face head on, and a guilt that she can’t come to terms with.

Based on a graphic novel, this film has beautiful moments of fantasy and imagination, mixed with the everyday life of a small seaside town. It’s a beautiful mix of the everyday, the small, and the fantastic. I loved the costume design and the little Nordic magical touches, the rune stones, the different kinds of giants, the tent Barbara chooses to sleep in. It’s a child’s magical world, threatened by the tragedies of growing up and grown up life.

The heart of the film is Barbara, a bespectacled awkward child, with her own way of dressing, out of step with those around her. Madison Wolfe plays her beautifully, making her both strong and vulnerable. A pugnacious child full of imagination and fire, but who is also genuine and likeable. She delivers some great one liners so beautifully. She’s joined by Zoe Saldana as the school counsellor tasked with getting through to Barbara, but struggling to help the closed off child. Imogen Poots is Karen, her older sister, who can’t keep the household together and tries to nurture Barbara but can’t always find the right way to be close to her. Barbara is a wonderful character to watch in a film, but would be a very hard person to live with.

Initially a little slow, the film builds as we are drawn into Barbara’s world. As she slowly and a little reluctantly makes friends with new girl Sophia (Sydney Wade), we learn about the giants, who they are and what they look like, about the traps and charms Barbara has set, but what we don’t learn is what Barbara is running and hiding from.

Perhaps that’s a little flaw of the film, because although the movie is full of emotion and genuine feeling, when you don’t know what that feeling is about, it’s harder to invest in it. It’s not that we need to know everything at once, but rather that there are not enough hints and titbits, not enough clues dropped. After all the reticence to talk about Barbara’s big secret, the reveal falls a little flat. This reluctance to reveal also means that there are some questions we’d love to know the answer to, but are not explored, though these are minor. 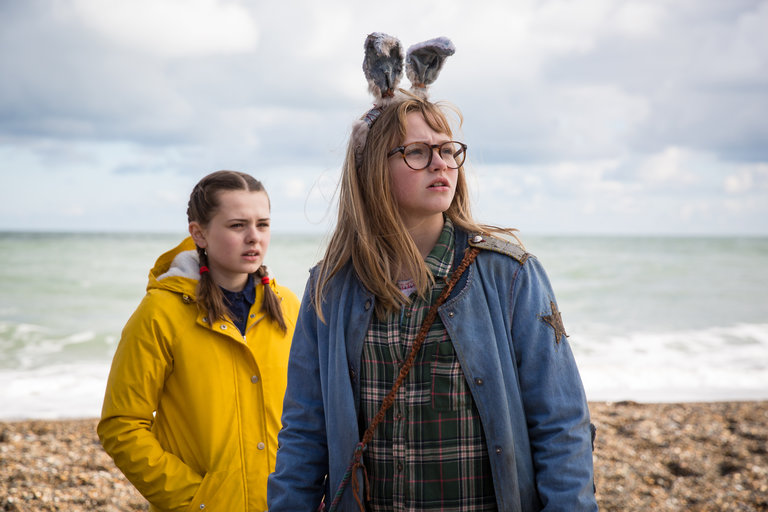 The film is also a little bit too much like A Monster Calls, which is a shame. As it’s adapted from a graphic novel, we know that it’s not a copy or a cash in, but it still feels too similar to feel totally unique. But with it’s excellent special effects and design, it feels different and fresh, too.

But all of that said, it’s a really charming and heartfelt story, and Wolfe is a true delight as the odd and snarky Barbara. It’s a film that’s beautiful to watch, and creates a small, childlike world for us to enter into, reminding us of how we all feel sometimes, the way in which we can’t always face our pain and problems head on. Never is this more true than in childhood. It’s a charming film, with small, sweet delights, and well worth a look.

I Kill Giants is out on DVD & Blu-Ray now!

One thought on “I Kill Giants – Review”