It’s 2045, and the world is an awful place to live. The poor live in the “stacks”, unsafe high rise trailer parks, while an evil corporation, IOI, keeps them there by encouraging them to stack up debts that are impossible to pay off. Everyone escapes the awfulness of reality by entering The Oasis, a VR world where you can do, be or have anything.

The creator of the Oasis, Halliday (Rylance) has died, and IOI are keen to get their hands on the rights to the Oasis, to take control of it and make it lucrative rather than free for everyone. But to do this, they’d have to find the clues that lead to the Easter Egg at the heart of the game which would grant them control. So far no one has found any clues, until Wade Watts, aka Z, (Sheridan) manages to find the first one. With the help of his friends, including online best friend Aech (Waithe) and the girl he has a crush on Art3mis (Cooke), he sets out to find the egg and keep the Oasis as a haven for everyone. But can he outwit the evil Sorrento (Mendelsohn) who is determined to win at any cost?

Based on the book by Ernest Cline, Ready Player One is a film full of 80’s nostalgia because of Halliday’s obsession with that era. Old games, books and films are referenced everywhere and with great love, which makes having Steven Spielberg as the director an added layer of nostalgia, though he doesn’t reference his own 80’s film classics.

It’s a film for gamers or action lovers, with it’s focus on light, sound, action and spectacle. There are some truly exciting set pieces in this film, and one that you’re going to get a real kick out of seeing on the big screen. Car chases, otherworld avatars and anti-gravity dance floors are all huge spectacles, thought the smaller VR scenes are beautifully realised too. Most importantly, in the masterful hands of Spielberg, it’s more than just a spectacle, unlike a lot of blockbuster films of recent years. It’s fairly light, but the characters are all well delineated and give good performances. Yes, you’re going to be blown away by that world creation, but you’re also going to hate that bad guy, and want to see the good guys win, and in that sense, it has a lot in common with classic 80’s adventure films, which is a nice subtle touch. This film uses character to make you care about what happens, to make you invest in those big scenes. 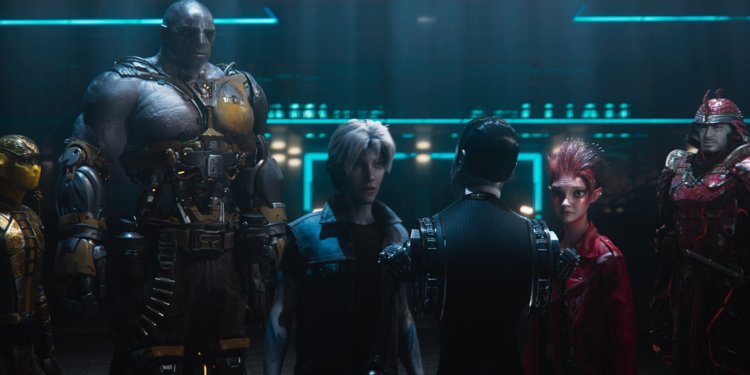 Though the characters appear in live action and in the VR world of the Oasis, they are whole and well realised, and never feel wooden in when they’re VR. They’re clearly recognisable. The central performances from Tye Sheridan as Z, our brave hero and all round good guy, and Olivia Cooke as the brave adventurer and love interest Art3mis are really beautifully are really warm and real. They feel down to earth even as they go on a huge quest to find keys and save the world. Ben Mendelsohn is a wonderfully despicable bad guy, but he’s not one dimensional, he feels like he has real motivations, although they’re misguided. He’s a dangerous man who genuinely believes in what he does and will stop at nothing to get what he wants. While there are laughs and romance in this film, he’s it’s dark, unimaginative and controlling heart.

It’s a fast paced thrill ride that’s got enough differences from the book it’s adapted from to feel fresh to all those who’ve read it, and yet keeps all the important things intact: the characters, the main premise and the general plot. It’s a star studded cast who make sure the film stays grounded in relationships and emotions, and yet it’s also definitely a delightful tent pole film, with a focus on 80’s music and culture, chases, action, explosions, and gaming. Perhaps a bit loud and overwhelming for some, it’s an incredible feat of film making from a masterful and imaginative director, and well worth a watch if you like your films big. (I do!) It’s a great ride, and should please sci-fi fans, gamers and a teen audience too. Great fun.

Ready Player One is out on DVD & Blu-Ray now!