Mel Brooks is a comedic genius. His work has spanned decades; 50 years of spoofs, satire, and slapstick and complete immortalisation the cinematic history. His works have produced monsters, sported sheriffs, and even went to a galaxy far, far away.

His directorial debut, however, was the darkly humours, but absolutely wonderful The Producers. Earning the director an Academy Award for Best Original Screenplay, the film is considered one of the best comedy films of all time and has gone on to become a stage musical and spawned yet another movie based on that musical.

Half a century later, audiences are still flocking to the movie and there are very good reasons why.

Starring the late Gene Wilder and Zero Mostel, The Producers revolves around old theatre pro Max Bialystock. Max was considered one of the best but his recent works have flopped, turning him into a wash-up producer with no hit, no money, and no prestige. He lives month to month by liaising with elderly ladies in order for them to cough up some cash. That’s when a scheme ends in his lap – if he sells shares to a play guaranteed to flop, he’ll reap the rewards as everyone will presume it had made no profit. Roping in his accountant Leo Bloom, the hunt is then on the find a failure which seems a dead cert with the play…Springtime for Hitler.

When the film first came out in 1968, it caused a bit of a ruckus. The deeply dark comedy about two Jewish theatre owners conning Broadway out of money with a musical about Hitler caused many critics to slam the show (ironically, not seeing the film for the satire it is.) However, over years, it  has garnered such praise. Though it does smatter with directional flaws as a debut feature would, it is a terrifically realised movie that exposes the big business side of art. It serves as a deeply cutting commentary on how theatres, movies, and art are churned by those looking to earn a quick buck. The  movie, in its outrageous vulgarity is hilariously spot on.

What works best for the film is the absolutely outstanding double-act in Mostel and Wilder. The big and brash Bailystock makes a superb accompaniment to the nervous, blanket clasped Bloom. The astute actors bounce lines off one another, with Wilder’s charming crazed antics gaining traction as Mostel’s greedy and seedy Max gets in deep with his own scheme. Without this chemistry, the film would’ve lost it’s slickness in telling the brilliant jokes. 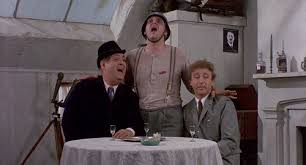 For those still bemused by Hollywood; seeing those cartoon big bucks in producers eyes every time another spandex clad blockbuster comes out on the big screen, then The Producers still has that droll air to it. Brooks’ dry humour is a testament to great and honest writing; the scandalous and the extreme pushing the boundaries of the candid.

Paired with a phenomenal double act, The Producers still stands as a marvellous comedy – a truthful one five decades later. Completely unmissable for the casual and hard-core cinema fan.