There is no doubt Spike Lee is a great director. His works have constantly examined race, poverty, class and criminality in a raw and direct manner. Films like Do the Right Thing and Malcolm X, not only highlight people of colours experience on-screen, but they also helped launch the careers of many prominent African-American actors.

Sadly of late, Lee’s work has lacked the flair and poignancy his early work was so revered for. With an ill-advised Oldboy remake and his last few projects failing to make waves, many believed his career was coming to an end. But with his latest, BlackkKlansman, we see the rawness and storytelling that made Lee world famous.

Based on the incredible true story of Police Officer Ron Stallworth, (John David Washington) the first Black officer of The Colorado Springs Police Department. Stallworth answers an advert for new members of The Ku Klux Klan. Once he makes contact with the organisation, a fellow white officer Flip (Adam Driver) will pose as him to attend KKK meetings. Together, the pair try to expose the Klan and even make contact with the Grand High Wizard, David Duke himself, (Topher Grace).

Despite the investigation being held back in 1979, Stallworth did not speak openly about it until 2006. He published his book ‘Black Klansman’, which provided the blueprint for the film, in 2014. Lee acted as director as well as co-writer on the film. The film is also produced by Jordan Peele, of Get Out fame.

The narrative begins by introducing Stallworth as the first Black Officer in Colorado Springs history. Given menial tasks and having to tolerate the causal racism of his team, with no resistance from his superiors. He is moved to investigations and while under cover at a Black equality meeting, he meets student activist Patrice Dumas, (Laura Harrier). The event inspires Stallworth and he responds to an advert for the KKK. He quickly establishes contact and suggests sending a white officer in his place to expose the organisation.

The context is brilliantly recreated through sets, aesthetic and even music. This feels like an older Police drama but grounded by the grittier subject matter.

The film is a classic mix of the director’s dramatic tones and dark humour. It is never afraid to belittle and mock a group such as the KKK. Their beliefs and rhetoric are a cause for continued mockery. Yet the screenplay is intelligent enough to show their ignorance as dangerous and threatening, when they chose to act. The humour and satire mix at times feels uneven. Going from dark humour to scenes such as Harry Belafonte’s character recounting the true events of Jesse Washington barbaric lynching, feel extreme.

The events of the film may be set almost forty years ago, yet the constant and deliberate parallels to now, make BlackkKlansman an important story. The narrative displays the insidious nature racism has taken through its characters. The image of a man like David Duke, that downplays his rhetoric and hints at political potential, is a clear nod to our Trump era. Lee has captured a great medium in his narrative that makes the themes stand out but not heavy handed.

If viewers are wondering if great acting runs in the family, it’s safe to say John David Washington (Denzel’s son) has given a stand out lead performance. Washington displays the internal struggle of a man trying to change an organisation that has the racial inequality of the Police. His interaction with both activist Patrice and the Klan develops his character. It’s a charismatic lead performance. 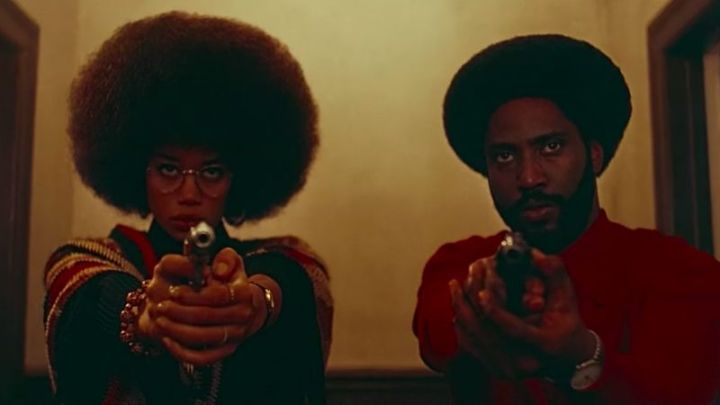 As Detective Flip Zimmerman, Adam Driver can physically infiltrate the Klan, despite his Jewish Heritage. His role questions the responsibility and choices of those who can ‘pass’ inside a racist system. Great support is seen from Topher Grace, as the immoral leader of the KKK as well as Laura Harrier as straight talking activist Patrice.

The film ends with real, raw footage of the white power rallies in Charlottesville. Released exactly one year from the date white supremist marched through the town and activist Heather Hever lost her life, while fighting for justice. It’s a profound ending that reminds us these people and groups still live and operate amongst us.

A thrilling and important film. BlackkKlansman is a welcome return to form for writer/Director Spike Lee. Some tonal inconsistencies do not hold back how poignant and relevant a film this is.

BlacKKKLansman is out Wednesday 23rd August