Movies have explored the volatile nature of memories from Vertigo to this year’s American Animals.

Re-released for the first time on DVD & Blu-Ray, as well as being available on MUBI, Last Year in Marienbad (or L’Année dernière à Marienbad) explores memory, love, and fantasy. 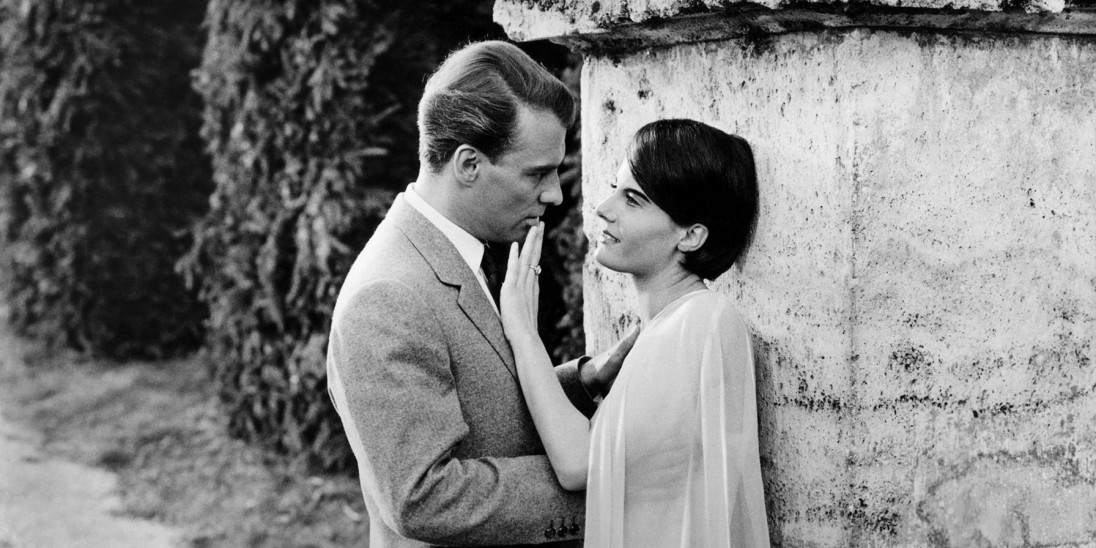 Last Year in Marienbad revolves around a man and a woman who meet at a lavish hotel, populated by wealthy socialites. The unnamed man is certain that he has seen the unnamed woman before and approaches her, sure of their love affair the year before in Marienbad, However, she cannot remember the tenderness they shared, nor can she remember the man himself. Over the course of the evening, the man spends his time recollecting their previous encounter whilst she bemuses that she has no idea.

Directed by Alain Resnais, in one of his better works, Last Year in Marienbad is a tremendous weaving through relationships and memory in a glorious and stunning format. The movie explores the unreliability of our own minds whilst also mining the unreliability of our narrators. Renais establishes the dream-like nature of this state from the beginning; long drawling camera shots are filled with statute , Scenes blind into one as their journey switches between the past and the present in such a fluid manner that it could all just be in the mind of our narrator (in this turn, the man.) Other characters move in such a mysterious and striking way that they seem ghoulish, adding a mirky mysterious backdrop to our gorgeous lead characters

Last Year in Marienbad is written by Alain Robbe-Grillet, who at the time had a contradictory opinion to Resnais on whether or not these lost lovers had ever met. Since it’s conception, the films ambiguity has sparked many different viewpoints on what is going on in the story; lovers out of sync with their memories, a man speaking to the ghost of the woman he has killed, or he has lost, or perhaps two people entwinned in a forever limbo, retracing the footsteps of their sin. There is even talks about it being a lose version of the Orpheus and Eurydice Myth (which would make it a glorious companion to Jean Cocteau’s 1954 film Orphée. All these interpretations are, whether intentionally or not, woven into the movie, adding to the sleep-like fantastical state that begs for repeat viewing.

The films leading actors truly bring this intricate script to life. Giorgio Albertazzi and Delphine Seyrig have enormous chemistry together. While Albertazzi is great as this lover turned detective, it’s Seyrig that enchants here. Seyrig herself certainly looks like a young Audrey Tatou that, those just visiting is tale anew, will feel an air of Amelia about the feature. With stunning costuming, and even how she moves weirdly, Seyrig creates an allusion of her character – an unfathomable puzzle to be put together bur Albertazzi’s man and us the audience.

Last Year in Marienbad is a voluptuous romp that broods greatly. A stunning piece of cinema, this is a must-see for film lovers everywhere.

Last Year in Marienbad is out on DVD & Blu-Ray now!