Solo – A Star Wars Story should bear the ‘Alan Smithee’ logo. It is not the sole work of director Ron Howard, who was brought in to rescue the film after directors Phil Lord and Christopher Miller (21 Jump Street) were fired by the producers – to quote a line from the original, ‘this is some rescue!’ Yet his is the name on the end credits of this bland, inert Star Wars ‘origins’ film which ought to give the producers pause for thought. I was wowed by The Last Jedi but this is more of a checklist than an adventure. And to think that Steven Spielberg and screenwriter Jeffrey Boam explained the young Indiana Jones in a ten minute prologue to The Last Crusade (facial cut, fear of snakes, the bullwhip); Solo takes two and a quarter hours.

Essentially, it tells the story of young Han Solo, smuggler extraordinaire, how he met Chewbacca, acquired the Millennium Falcon and ended up on Tattooine, the planet on which he eventually met young Luke Skywalker, the moisture farmer’s nephew who became the second-to-last Jedi, if my calculations are correct. For some cinemagoers, this is utter nonsense. But for others – this reviewer included – it fired our imagination as young people, giving us a love for cinema that expanded to Kurosawa, John Ford, Leni Riefenstahl and all the directors who inspired Star Wars creator George Lucas. 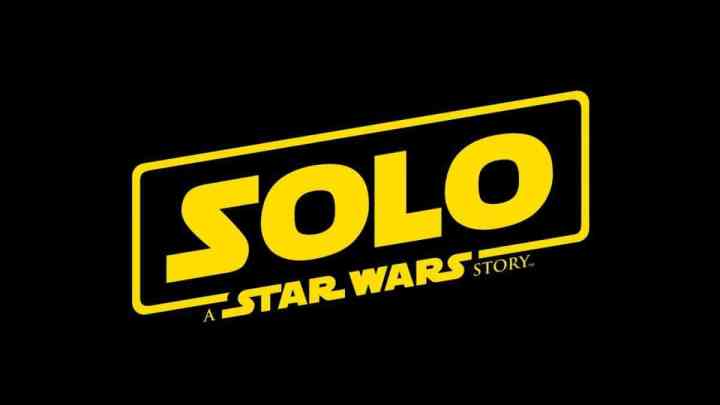 Han was originally played by Harrison Ford, the sometime carpenter whose association with George Lucas and Francis (The Godfather) Coppola led to his being cast in Star Wars and having his career blasted into hyperspace. Ford earthed the movie. His weary cynicism was a strong counterpoint to Mark Hamill’s Luke. The actor playing his younger self has some waistcoat to fill. Alden Ehrenreich, who also has an association with Coppola (the little-seen Tetro) – you can start the game ‘Six Degrees of Star Wars’ any time you like – isn’t bad, but he was let down by the script, credited to Lawrence Kasdan and his son Jonathan. Someone should have told the producers that fathers and sons don’t do so well in the Star Wars saga.

It is not Ehrenreich who doesn’t fill the screen, rather the characterisation. I don’t believe that Star Wars fans are anally retentive – although I did complain watching Rogue One that the Death Star doors didn’t move fast enough. However, not every child in the Star Wars universe is enslaved by a tyrannical ‘ethnic’ alien as teen Han is here. I’m sure there is other literature that the writers can reference besides Oliver Twist. The film starts on the wrong foot, positing Han as another Anakin Skywalker, sent off to do a man’s work and coming back with some hyper-fuel worth 600 credits (don’t blame the transcriber). Han tries to leave his home planet of Corellia with his childhood friend, Qi’ra (Emilia Clarke). In a nod to Uncle George [Lucas], there’s a car chase and quite a neat ‘oner’ if you appreciate continuous takes. But circumstances divide them and Han signs up to join the Empire. If you want to know why Stormtroopers shoot so badly – a Star Wars trope – it is because the recruiters don’t ask too many questions. 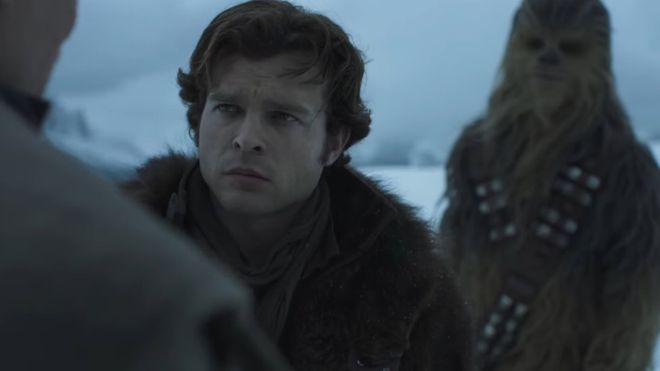 When Han ends up fighting for the Empire, the film blossoms with promise, but then we get another Star Wars trope (from Return of the Jedi), with him thrown in a pit to face ‘the Beast’ and we know what’s coming.

In the interest of spoilers – hey, this film is a spoiler, it soils the Star Wars universe – I won’t say what happens next, but the checklist also includes meeting Lando Calrissian (Donald Glover) and his co-pilot L3-37 (a motion capture performance by Phoebe Waller-Bridge). Star Wars’ history reflecting ethnicity has never been great – witness Jar Jar Binks  in Episode One – but I found it insulting that charismatic (black) Lando doesn’t have a non-droid girlfriend. Is this the only way the Star Wars universe can depict black people – by emasculating them? Waller-Bridge is amusing for the time she is on screen, although behind L3-37’s actions is the worrying message that, after years of mistreatment and ‘restrainer bolts’, artificial intelligence will turn against humans – but, hey, this is Star Wars, so it doesn’t matter. Part of the problem with Solo is that the new characters have so much more life than the established ones, yet get short shrift – Thandie Newton also makes an appearance, adding a third franchise to her name after Mission: Impossible and James Bond.

Eventually, we have to talk about Woody Harrelson as Becket, a soft-hearted criminal in the employ of Dryden Vos (Paul Bettany). When we see Becket sitting in Luke Skywalker’s gun turret in the Falcon firing at TIE fighters, he makes it seem like everyone can use those things, not just those with the Force, the mystical energy source that certain biologically engineered people can tap into like Gatorade. Harrelson brings too much baggage to the role, and though he is doing his best work in this stage of his career – he really impressed in War for the Planet of the Apes as a nuanced rather than ‘mad’ general – he highlights the paucity of the characterisation.

Solo is the first Star Wars movie to lack the Force, the quasi religious underpinning to the whole saga; I felt its absence as a counterpoint against which other characters react. In Star Wars lore, the Force actually gives the Empire its mandate to rule, having tapped into its dark side. It’s like democracy. The film also perpetuates the stereotype that all women in the Star Wars universe have an English accent – and not regional ones either. Millions of galaxies and only one finishing school – I don’t buy it.

Without the ambition to expand the Star Wars universe – there’s a Syndicate and ‘Crimson Dawn’ but I started not to care – Solo comes across as a footnote. Ehrenreich has charm in the Leonardo Di Caprio mode but towards the end I started to compare the film unfavourably to Baby Driver, a film that also had a baby-faced lead with dreams of leaving his life behind. There is no excitement and exhilaration or even relish in Solo. Whatever ambitions Miller and Lord had for the film have been tempered by a ‘safe pair of hands’, Howard, who had his first lead in a George Lucas film, American Graffiti. There is no ‘wow’ factor here. At one point, I was so disengaged, I thought I was watching a Pirates of the Caribbean movie – there’s even a large space octopus in this one, with a thousand eyes but nothing to watch, clearly a design fault.

Solo: A Star Wars Story is out in on DVD & Blu-Ray now!

One thought on “Solo: A Star Wars Story – Review”