There are certain projects out there that sell you on first announcement. Widows is one of them. Steve McQueen as director? Check. Gillian Flynn as co-writer? Check. Han Zimmer writing the score? Check. Viola Davis, Elizabeth Debicki, and Michelle Rodriguez as lead characters? Check. Check. Check.

We were already sold for Widows but how does it far against those expectations?

Based on a book by Lynda La Plante, Widows revolves around four armed robbers, led by harry Rawlins, who are killed during a failed heist attempt. Harry’s wife Veronica is handed a notebook after his funeral that contains the details to one last job. When she is threatened by the man Harry stole the money from, she brings together Jennifer and Linda, two wives of Harry’s crew who also perished in the robbery, Together, they’ll have to enter the world of crime their husbands were a part of and pull off an audacious heist.

Steve McQueen is a vastly intelligent yet emotive filmmaker who has crafted an impeccable piece of work here. This is a thrilling and engaging movie that takes you on many different journeys at the same time. Here he threads together an intense and amazing action drama at the same time as making social and political commentary on the state of America whilst also exploring the world of grieving women. He is a mastermind; piecing this murky world with so much grit and beauty. It’s a palpable and visceral feast that has a lot of bite and McQueen orchestrates it phenomenally.

McQueen and Flynn manage this triad of stories and backstory in a brilliantly accomplished adapted script (certainly there are ebbs of Gone Girl here.) Whilst dialogue and flashbacks are prominent for unearthing these characters, Widows also uses backdrops and the city of Chicago to tell a deeper story. Urban neighbourhoods (or “wards”) and derelict buildings are juxtaposed against the rich white buildings, telling the background world. I feel as though this name would be bounced around a lot. But at the forefront, you have a story about four women transforming and coping with their grief. In the back, you have an allegory for Trump’s America and the scheming between politicians who say one thing to attract you into their web, and another to manipulate you. 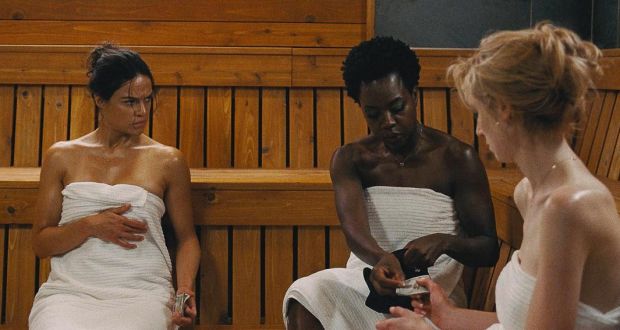 The performances really pull this off. Of course, as aforementioned, any film that is led by Viola Davis is going to be a winner. The Academy Award-winning actress proves her mettle as she goes to great depths with Veronica. What could’ve been a one-note character is actually a layered character with a history of pain and anguish. Davis reaches into the core of Veronica and pulls out some masterful work.

Another exceptional performance is Elizabeth Debicki’s Jennifer. A woman who has spent most of her life being bullied and put down. Debicki makes her likable and funny yet broken. Debicki is develops her and moves with her, becoming a  Michelle Rodriquez is also stellar here and praise for rising star Cynthia Ervio must be given. However, there are characters and performances underused and it’s a shame that the likes of Jackie Weaver and Carrie Coon are in a handful of scenes together

Of the men, Daniel Kaluuya is a highlight. His psychopathic enforcer role Jatemme is so gloriously encapsulated that his villainy is terrifying. Collin Farrell and Brian Tyree Henry go head to head  and Liam Neeson makes a great crime husband (though perhaps not the best on screen kisser.) It’s a superb collection of actors and actresses in their prime.

It’s a marriage of lots of intricate parts and we haven’t even skimmed over Han Zimmer’s impressive beat-filled music that keeps the pulse racing. It’s a union between spectacular performances, intense directing, gorgeous cinematography, great writing, and a wonderful score. Like a perfect heist, Widows makes sure all these elements tick on nicely. Stealing your attention and pushing you to the edge of your seat, Widows is an accomplished action-thriller movie.

One final note: There has been a lot of talk about Bradley Cooper’s dog Charlie stealing the show in A Star is Born. Here, Veronica carries around cute white Westie called Olivia and she garnered ripples of affection and laughter every time she was on screen.

Widows is out 6th November