The sea is a harsh and cruel entity. We haven’t explored most of the deep blue that stretches for miles and miles across our world. Yet many tackle this wild and untamed ocean in hopes of discovery – whether that’s land, your true spirit, or even love.

But what happens when the sea becomes a nightmare?

Adrift revolves around the real life story of Tami Oldham and Richard Sharp. Enthusiastic travellers, the pair first meet in Tahiti and fall in love with one another. With Richard being an avid sailor and Tami keen to explore, they embark on a journey to deliver a 44 ft yacht to San Diego. However,  the pair sail straight into Hurricane Raymond. Tami awakens from the aftermath of the storm to see the boat in ruins and Richard badly injured. It is up to her, however, to find the strength and determination to guide them to land.

Directed by Baltasar Kormakur, who also directed other distressing factual films such as The Deep (2012) and Everest (2015), Adrift is a gripping movie. The great decision here, that propels it forward and adds needed depth is to focus mainly on the couple, rather than the disaster. In fact, the Hurriance is a minutia detail here, instead it is about how Tami builds up courage to steer them home as well as the delicate beginning of them falling in love with one another. Having this focus crafts a more sensitive centre and that makes it all the more engaging.

Adrift is helped by the performances. Shailene Woodley and Sam Claflin are impeccable together – their chemistry really drags you into this harrowing story as they bring these people to life on screen.  Claflin continues to be one of our best actors and every role he takes adds a new dimension to his talent and this is no different. However, quite rightly, this is Woodley’s film. My god does she have such a command of understand a character, a story, and the roller-coaster Tami is put upon. She truly gets underneath the layers. In wordless scenes, she grasps the weight of Oldham and it’s just breath-taking to watch her. 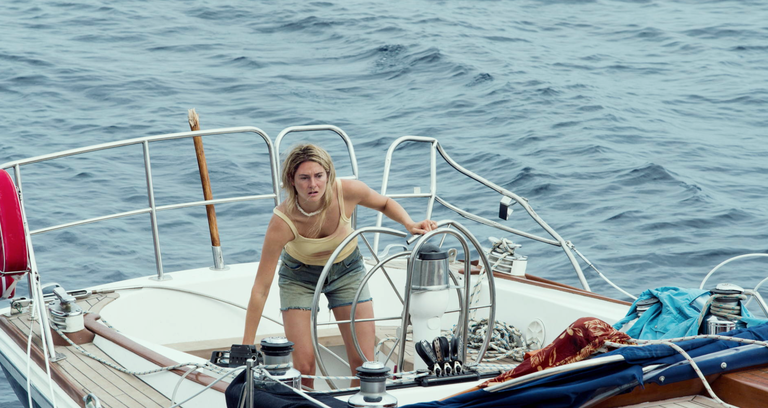 The biggst problem with the film is the structure which mixes the aftermath of the hurriane with their tender first moments. The past and future  colliding  can befuddled . Admittedly, I believe this is going to split audiences. Some will find this non-linear structure distracting from the survival part of the story whilst other’s will see how it generates intimacy and delicacy and affect the film in a personal manner.

As always with true stories of survival, the centre of the film is Tami Oldham. The absolute ordeal she went through for 41 days is astonishing and her character is carried superbly by Woodley – a woman wrapped in empathy, freedom, and wildness caught on the vicious and brutal see.

Kormakur has crafted an emotive movie that has poignancy and soul that does justice to the real lives painfully etched upon the screen. Adrift is a worthwhile and harrowing experience with expert and powerful performances at the centre of it.

Adrift is out on DVD & Blu-Ray now