Up until First Reformed, I had pretty much given up on Paul Schrader, the screenwriter turned director whose best films – Blue Collar, American Gigolo and The Comfort of Strangers – are way behind him. His 2013 collaboration with Bret Easton Ellis, The Canyons, featured an embarrassing Lindsay Lohan in soft porn. His 2016 adaptation of Eddie Bunker’s Dog Eat Dog starring Nicolas Cage and Willem Cage strove for black comedy but came across as distasteful. After years of working outside the studio system in Hollywood on films in various states of compromise, including Dominion, the prequel to The Exorcist, on which he was replaced by Renny Harlin, Schrader was overcome with cynicism. In the opening of The Canyons, he shows us a derelict movie house, effectively saying ‘cinema is dead’.

It shouldn’t be much of a surprise that a man with a Calvinist upbringing should rise again, returning to religion and the stuff of Robert Bresson, the French director he idolized in his book ‘Transcendental Style in Film’. Yet it is! At a time when America has veered lazily to the right, Schrader, aged 71, has found his voice, subject and purpose.

First Reformed tells the story of Reverend Toller (a goatee-free Ethan Hawke) who ministers to a congregation of six in a 250 year-old renovated church, First Reformed in Albany, upstate New York. The church is something of a local landmark – Toller offers tours, with a one-size-fits-all baseball cap for sale. Toller tries to live within the church’s means, refusing the offer of a plumber to deal with deficiencies in the men’s room – an apt description of Schrader’s oeuvre. He is surprised when one of his parishioners, a modestly pregnant Mary (Amanda Seyfried) asks him to speak to her husband, Michael (Philip Ettinger), who doesn’t want to bring a child into the world. 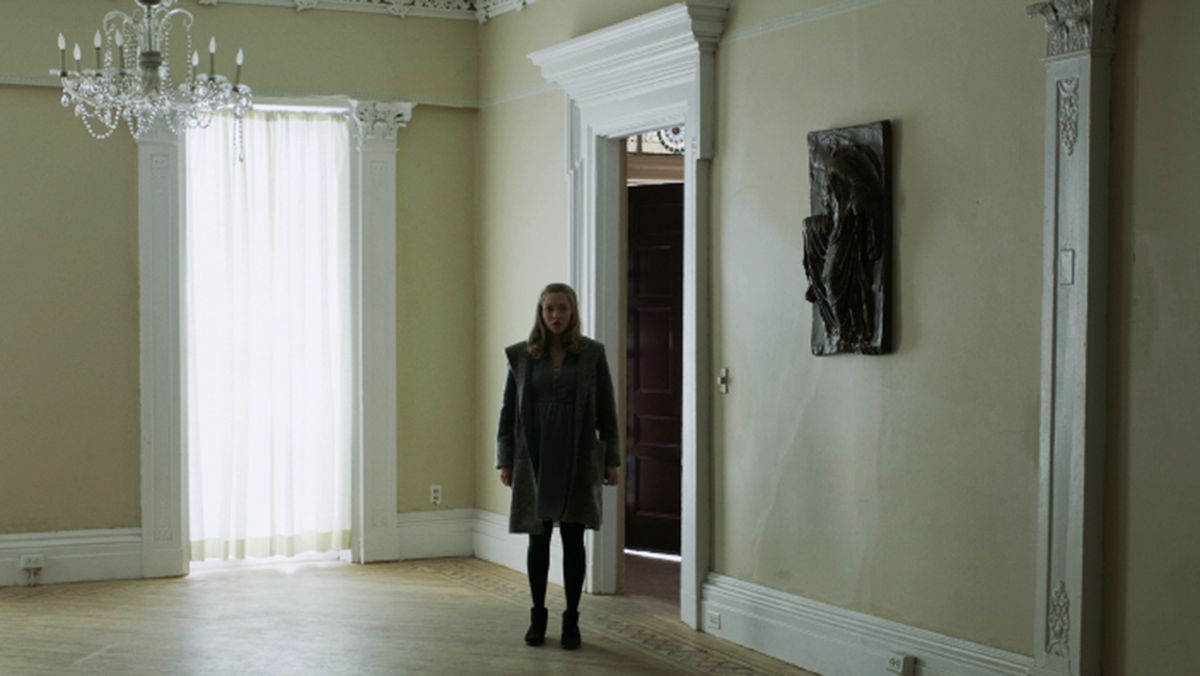 Never the most commercial of directors, Schrader eschews wide screen for the Academy Ratio (1.37: 1) that we associate with black and white movies of the 1930s. In the film’s opening, the camera moves slowly towards the white clapboard church where Toller spends his days writing in his journal – a familiar Schrader trope. For the most part, the camera is static. There is little music on the soundtrack save for those performed by a small choir. In being reductive and restrained, Schrader exercises perfect control over his material. Even when he stages – in a literal flight of fancy – the ‘magical, mystery tour’, his choices work.

Michael is concerned by the effect of climate change: the chance to stop it was, according to his reading, lost in 2015, coincidentally the year that the climate accord was signed in Paris – I said Schrader was cynical. His attempts at eco-activism left him frustrated. After their first meeting, in which Toller tries to convince Michael to live with both hope and despair (‘you can’t have one without the other’), Mary calls Toller back to the house. She has discovered a suicide vest.

Toller has his own problems. He may have cancer. His marriage collapsed after he allowed his son, Joseph, to go to war in Iraq, where the young man died. Toller drinks to assuage his guilt. However, he performs his religious duties diligently, tidying up the gravestones in the churchyard and participating in a conversation with young Christians in the nearby Abundant Life 5,000-seater worship complex – a religious shopping mall to Toller’s corner shop.

Toller’s attempt to minister to Michael doesn’t end well. He finds himself on a collision course with polluting industrialist Edward Balq (Michael Gaston), who represents big business’ indifference to the destruction of the planet.

The film recalls, in very direct fashion, Schrader’s iconic screenplay for Taxi Driver, in which ‘God’s lonely man’, Travis Bickle (Robert de Niro) took on a politician, Charles Palantine (Leonard Harris) before re-focussing his efforts more locally. You work out pretty early on what the climax will be – it builds to the re-consecration of First Reformed church. Yet there is something inevitable – Schrader-like – in how the action pans out.

The film’s biggest surprise is Hawke, who gives a thoroughly controlled, interior performance. He has to pull off a scene in which he lies, fully clothed, on top of another person in an act of homage – I won’t explain it further – and convinces completely. He is contrasted with Pastor Jeffers (Cedric Kyle aka Cedric the Entertainer) who complains that Toller ‘spends too much time in the garden’. Jeffers has embraced big business, but Balq is worried that Toller might give the re-consecration ceremony a political dimension.

The drama is riveting through its essential simplicity whilst still having something to say about considering how mankind will be judged for ruining the planet. Schrader encourages the audience to value hope and despair as a dual response to 21st Century challenges and offers his most engaged and engaging film in decades.

First Reformed is out on DVD & Blu-Ray now!