Provocateur or irritant? Artist or idiot? Lars Von Trier divides audiences like his adopted ‘Von’ separates his first and last name. He is the writer-director who gave us Dogme 95 and a four hour film entitled Nymphomaniac – what’s to love? Not much. He doesn’t travel by air but instead lures talent such as Nicole Kidman and Bjork to Scandinavia to participate in his cinema of cruelty. For decades, he was a staple at Cannes, until he expressed sympathy for Nazism at a press conference and suddenly he was not an artist any more. If he has a muse, it’s Charlotte Gainsbourg – for most actresses, once is enough. Given his penchant for ‘child women’ – most notably Emily Watson’s character in Breaking The Waves – I suspect he’d like to work with Sally Hawkins. I have no idea whether he has placed that call.

Von Trier’s ‘comeback’ film – his first in five years – is an assault on good taste. The House That Jack Built is his serial killer movie. It features four instances of violence against women, as well as violence against children and the threat of violence against an African American. His protagonist Jack is played by a charismatic Matt Dillon, who hangs dog just as much now as when I first saw him forty years ago playing a school bully in My Bodyguard – goodness, how dogs fly. It’s the actor’s best leading role since Drugstore Cowboy in 1989, but then Dillon is not exactly Box Office or Oscar Bait – he’s no BOOB. He smoulders as if permanently posing for a photograph. Von Trier totally understands Dillon’s 1960s style appeal, so much so that he pays homage to Bob Dylan in D.A. Pennebaker’s 1967 documentary, Don’t Look Back, with gratuitous use of caption cards.

At Cannes this year where it screened out of competition, the film elicited boos, walkouts, one star reviews and social media reactions that tried not to give it the time of day. Yet for those who can tolerate its questionable, mostly comic attitude to violence and its misogyny – Von Trier is not known for his complex female characters or complex characters full stop – there is something to enjoy. Von Trier can stage artful sequences – Anti-Christ has a stunningly slow-motion tragic opening that eclipses everything after it, including the fox that says, ‘chaos reigns’. Here, he has made his most simplistic film to date; it is practically a cave painting. Yet it is his most memorable film in years – let’s forget about John Hurt calling every woman ‘Betty’ in Melancholia. It also features his starriest cast, in order of demise: Uma Thurman, Siobhan Fallon Hogan, Sofie Gråbøl and Elvis Presley’s granddaughter, Riley Keough.

At the beginning of the film, we hear Jack conversing with Virge (Bruno Ganz) who, unimpressed, asks him about his life. As it becomes apparent, Virge – Virgil – is escorting Jack to the Underworld and it’s a tricky journey – in the last section, as Jack negotiates a narrow watery crevasse, one scene is filmed with a GoPro. Ganz’s heavily-accented English throws Dillon’s drawl into relief. You can feel the amusement in Von Trier in putting these guys together – forget Midnight Run, this is the real unlikely buddy movie. Jack explains himself by relating five random incidents in his life that illustrate his addiction to serial killing. But there is at the heart of the film a joke. Von Trier plays with the tropes of the serial killer movie, but he isn’t interested in explaining Jack, rather telling us that the serial killer movie can never be redeemed by pretensions to profundity. The ‘pleasure’ of Von Trier’s film is in a tacit identification with Jack in what he rejects, a stranded motorist (Thurman) who calls him a wimp, an older woman (Fallon Hogan) who lets him in on the off-chance he can improve her pension, a mother (Sofie Gråbøl) who is seeking a father for her two boys and a young woman (Keough) who becomes his girlfriend. 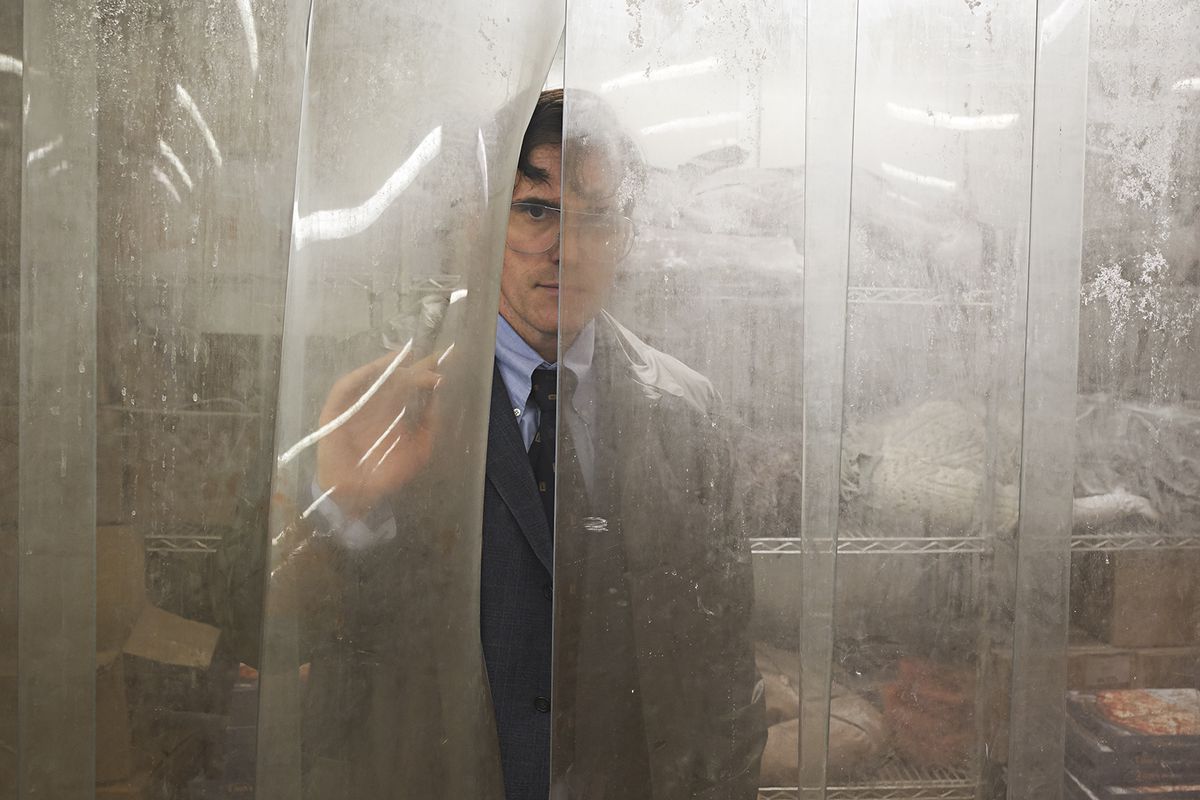 Each set piece is long and drawn out. We continue watching in anticipation of the break in Jack’s temperament. In the ‘2nd incident’, Jack is overcome with obsessive compulsive disorder and keeps returning to the crime scene to clean up; Von Trier puts us in Jack’s head as he imagines, Lady Macbeth-style, that damned spot. If the film has a serious point it is that, in the face of evil, no one can help. There is no force of goodness that saves the day.

Von Trier’s play with Americana extends to Jack hiding out in an abandoned pizzeria – he has a use for the fridge but no taste for the stock of pizzas that he has inherited. Yet he doesn’t downplay the shock value of the violence, replaying the nastiest scenes in jarring flashbacks.

The other joke is that Jack imagines himself as an architect. At the end of the film, he builds his house, one not exactly for human habitation, though there are humans in it.

The humour extends to a play on words – the complaint about a broken Jack in the first sequence and the use of ‘Hit the Road, Jack’ over the end credits. Von Trier wasn’t trying to win the Palme D’Or with this one, but he reflects on his own route to Hell. The film ends with a montage of his work.

Von Trier is no more going to Hell than he is getting on an aircraft. His film is the opposite of an arthouse pleasure. The ‘moral’ finale is a put-on. He is making the point that serial killers, like provocative film directors, are deviants who can’t or shouldn’t be saved. Don’t imagine that’s what he really thinks; Von Trier is entirely disingenuous.