Laurel and Hardy are history’s greatest double act. Their influence in comedy has bounced down through generations. People know their sketches. They quote the jokes. Children now are even shown their movies. Laurel and Hardy’s impact is one for the history books.

But their later years have yet to be explored. Now we’re treated to the glorious Stan & Ollie!

Directed by Jon S. Baird (who also gave us the impeccable Filth,) Stan & Ollie revolves around the later years of the titular pair. As their star wanes, the pair head over the England to do a farewell tour across different venues. However, due to their declining popularity and problematic tour manager, the pair fail to sell out or make a splash. Due to previous issues with the pair and Hardy’s increasing health problems, there could be trouble with the tour. Can they survive their problems for one last swansong?

Steve Coogan is immense and intricate as British born Stan Laurel. His wide-eyed antics movies with a constant sorrow and utmost dedication to his partner Ollie. Coogan captures the admiration from Laurel but also the heartbreak he suffered and the sheer enormous comedy  genius that he was. Coogan inhibits all and produces an empathic and glorious performances that will be utterly remembered.

John C. Reilly is fantastic as Hardy. His laboured movements to his bigger than life personality is well-realised. Also his health – Reilly definitely crafts Hardy with the weight of Hardy’s decline that is pushed beyond his limits. The two together are fantastic. Perfect even. I can’t think of anyone who could create and embellish these roles in the way Coogan and Reilly do. Their chemistry is phenomenal and, at times, you think you are watching Stan and Ollie themselves. It’s an accomplished film pairing. 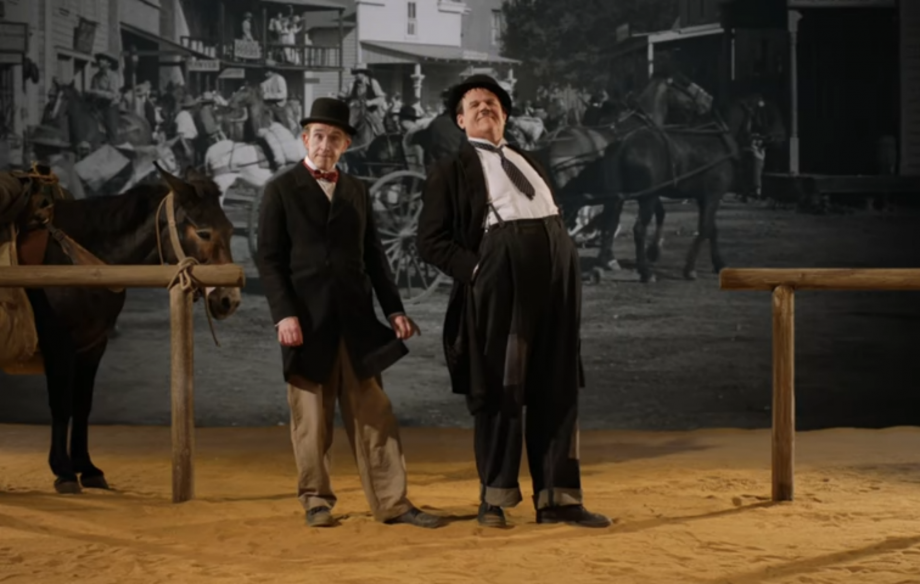 Reilly and Coogan are matched as a double act by Shirley Henderson and Nina Arianda as their wives respectively. The pair have their own snipes and jokes together but also they add dimensions to their husbands Stan and Ollie. Henderson is a safe bet to produce a character with quiet sensitivity but Arianda steals the scenes that she is in.

Baird injects a constant humour to the pair off screens. Scenes such as carrying a large trunk up a huge flight of stairs or checking into a hotel mirror classic Laurel & Hardy sketches. Adding a great deal of intimacy to the film and bringing this glorious era to life, this beautiful looking film is lovingly handled by a director who knows his source material and knows the men he is bringing to life on the big screen. It’s just absolutely lovely.

That’s not a bad thing. Films that are simply lovely. It’s nice to see a movie about a icons that doesn’t dissolve into outrageous or lewd acts. Obviously tortured artists aren’t necessarily bad but the focus here is just an unbridled love between two men. An enduring friendship, a forever double act, a story of two icons – Stan & Ollie is absolutely the perfect tribute.