Paul Feig has made a name for himself producing and directing mostly female led comedies. Acclaimed hits such as Spy and Bridesmaids made it clear that this was a quick-witted man who could craft hilarious movies for everyone to enjoy. Despite gaining so much heat from the severely underrated Ghostbusters movie, Feig is still an accomplished director with an eye on how female dynamics works.

Now he takes his mastermind to dark, mysterious thriller A Simple Favour. 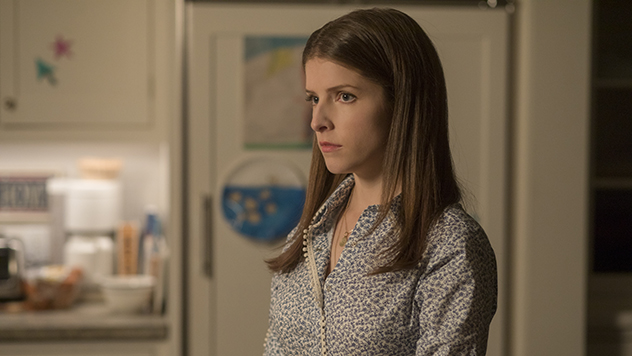 Based on a book by Jessica Sharzer, who also wrote the screenplay, stars Anna Kendrick and Blake Lively as two mothers, Stephanie and Emily (respectively,) who form an unexpected bond when their children do. Stephanie is a hard-working affable single mother who runs a housewife themed blog whilst Emily is a mysterious PR agent who is blunt and direct. Despite their differences, the pair become friends. Only one day, Emily asks Stephanie for a simple favour to look after her son after school. But when Emily is never seen again, it is up to Stephanie to figure out what has happened to her best friend.

Kendrick and Lively are a superb pairing in this delicious thriller that bite. Kendrick is definitely the stronger player by a smidgen, though, and that’s because she takes the role with absolute gusto. Fast and fevered Stephanie is not just the bubbly mother we see at the beginning, As the darkness and sorrow within her unravels, Kendrick perfectly allows these elements to rise, portraying a woman barely holding on and quick to fall into the wide-open mouth of Lively’s Emily.

Lively is divine as Emily and that’s not just her wardrobe. She bounds into Stephanie’s life with a strange allure and her stand-offish nature combine with this attractive pull that sucks the audience into the world as she does Stephanie. Lively pulls off this character with bountiful secrets to hide and a smart off to deflect the attention.

The film slinks with a great style. Whether that be the French music accompaniment or simply every single one of Blake Lively’s outfits, there is a particular brand here. There’s also a great sense of erotica and as dark secrets resurface, the shallow slickness adds a bit of grit and depth to the proceedings. Twists unravel in a great way, and it’s a lot of fun to follow the plot. A Simple Favour is the peppier and more colourful version of thrillers such as Gone Girl or The Girl On A Train and whilst it deals with a lot of the same pulp, keeping it’s look as different as possible really helps here.

It’s not an impeccable film and it certainly struggles finding it’s footing after the somewhat stilted Emily reveal. The story does save itself for a raucous entertaining finale but that stumble does not go unnoticed. And as much as he has been delighting audiences in Crazy Rich Asians, novice actor Henry Golding, as Emily’s Husband Sean, falters against the superb double act of Kendrick and Lively,

Still, A Simple Favour is juicy. That term may seem like a bizarre one to use, but it applies here. It is a sweet and sometimes bitter mystery romp that has a slick style and great humour. Like a perfect Martini, it pairs some impressive ingredients and has a wonderful kick to it too.

A Simple Favour is out on DVD & Blu-Ray now!