Having spent twelve years of my life in Hong Kong and Singapore and having heard the buzz around Crazy Rich Asians, I was ready to see the film. If the reaction of the audience at the preview is anything to go by the film is a crowd pleaser. The predominantly Asian audience greeted the cast members present for an introduction and Q&A with hoots of joy and were clearly predisposed to enjoying a story about Asian cultural concerns, their enthusiasm whetted by the overwhelming success the film has enjoyed in the US.

I myself generally don’t frequent rom-coms, and it was reassuring to see that nothing much appears to have changed regarding that genre. The ‘Cinderella’ story of a handsome ‘Prince Charming’ who falls madly in love with an ‘everywoman’ and sweeps her off her feet to marry her into his wealthy, aristocratic family is…ahem…’a tale as old as time’, and in view of recent events, not entirely improbable (1.9 billion people tuned in to watch the wedding of Prince Harry and Meghan Markle).

The difference here is that the tale takes place entirely amongst the Chinese Asian community, none of whom actually live in what used to be called ‘Mainland China’ (not sure if Shanghai, being the most cosmopolitan Chinese city, has ever quite counted in that description either).
However, it’s really pretty clear that Crazy Rich Asians isn’t really meant to be a film about fantasy romance or Chinese culture as such, but about ‘bananas’ (‘yellow on the outside, white on the inside’ – their nick-name for the Chinese born and brought up in the West) clashing with the old values of ‘mother China’ that the more traditional Chinese families residing in Asia continue to hold dear.

Rather than a film which hopes to explode cultural preconceptions and stereotypes, Crazy Rich Asians exploits and satirizes them. It starts off having fun with the notion of the ‘old-school British’ being snobby and racist, and then switches to present day New York, where our heroine Rachel Chu (Constance Wu) is an (impossibly young) Professor of Economics…of course she is…(not much of an ‘everywoman’ after all).
In contemporary Chinese culture, to be worthy of a favoured ‘prince’, she must have more than beauty and an auspiciously shaped nose – she has to be an academic high-achiever. We find that all the influential wives in Crazy Rich Asians have had an exceptional academic education – and Rachel has too, in spades (there’s a pun there if you’ve seen the film).

However, her expertise is impressive in in a particularly Chinese way – she uses her knowledge of economics and maths to elucidate on…game strategy! It’s the first indication that the film will be dealing with 3 great tenets of Chinese society – Family, money and gambling! 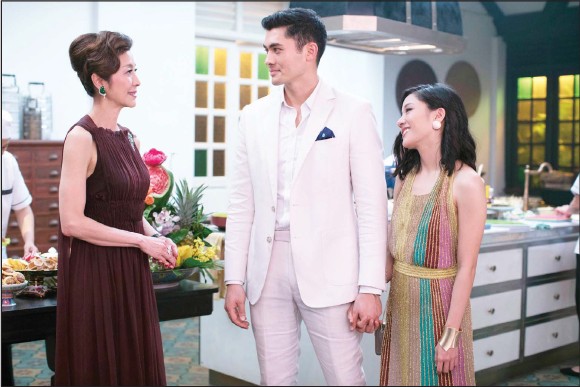 Rachel’s long-time boyfriend is a historian named Nick Young (Henry Golding – half British and half Malaysian). Rachel accompanies Nick to Singapore for his best friend Colin’s (Chris Pang) wedding, and it’s there that Rachel first finds out that Nick is actually the eldest son of the oldest, wealthiest and haughtiest family in Singapore, heir to a real-estate dynasty. He might as well be an actual ‘prince’.

Nick has kept his heritage a secret and has done nothing to prepare Rachel for life in the gaudy, gilded arena of Singaporean-Chinese high-society. She may be a seasoned New Yorker, but here she is a babe in the woods – and the socialite wolves can sniff out a hapless victim. Luckily, Rachel has an old college buddy, the nouveau-riche Singaporean, Peik Lin Goh (Awkwafina), to advise her.

Despite her academic achievements, Rachel has been raised by an immigrant single-mother (Kheng Hua Tan) in New York, so these privileged, spoiled and ultra-rich socialites see her as a mere gold-digger who has somehow bagged their most eligible bachelor from under their noses. However, Rachel’s biggest hurdle is Nick’s glamourous, scrupulously well-mannered but coldly formidable mother, Eleanor Young (Michelle Yeoh).

Crazy Rich Asians is amusingly conscious of its fantasy elements. It offers a world filled with obscene spending sprees, outrageous ostentation, designer dresses, opulent banquets and baubles, where if you have to ask the price of anything, you shouldn’t even be there. It makes gentle fun of the over-the-top displays of wealth, but not too much, after all, its also inspirational.

This film is also a great travel advertisement for the city-state of Singapore. I admit to being biased, having lived there and having much affection for the place and the Singaporean people. However, it’s not quite the city that the film shows us – it’s certainly gorgeous, friendly and futuristic, but it’s also conservative, hardworking, straight-laced and regulatory, and there is barely a passing reference to any of the males in the film having done their compulsory national service! It is not ‘Vegas’ – it is a marvellous mix of Asian cultures and foods, history and science-fiction, and it is distinctly ‘family friendly’.

Singaporean travelogue aside, the most important thing about Crazy Rich Asians is its English-speaking Asian cast. I’ve seen many films about Asians in their native languages, but few about the Asian diaspora. It’s been 25 years since a Hollywood studio has funded a film set in the present-day which features an entirely Asian, Asian-American, Asian-British cast – the last example being The Joy Luck Club (1993). Last year, only four out of the hundred top-grossing films featured an Asian protagonist.

Hollywood is undoubtedly watching the success of the film in order to gauge whether it should green light more Asian-centric projects. The reception for Crazy Rich Asians in the US might indicate there is a huge audience out there, and the universal appeal of this gentle, romantic, silly, sometimes cynical, rags-to-riches fantasy, makes it likely to do well in the international market too.

Crazy Rich Asians is out on DVD & Blu-Ray now!