There have been a lot of movies lately about religion and how religion can sway someone into doing the wrong thing. Similarly to recent drama Apostasy, The Children Act looks at Jehovah’s Witnesses and how their beliefs can nearly kill.

Directed by Richard Eyre and based on a book by Ian McEwan, The Children Act revolves around Judge Fiona Maye who has been swamped with loads of life altering cases. Her husband, miffed at her isolating behaviour, has decided to conduct an affair – telling her before he does it. After kicking him out, she is handed a case of a young Jehovah’s Witness boy refusing a blood transfusion because of his religion. With her marriage falling apart, Fiona becomes too invested in the case – but is there more going on than meets the eye? 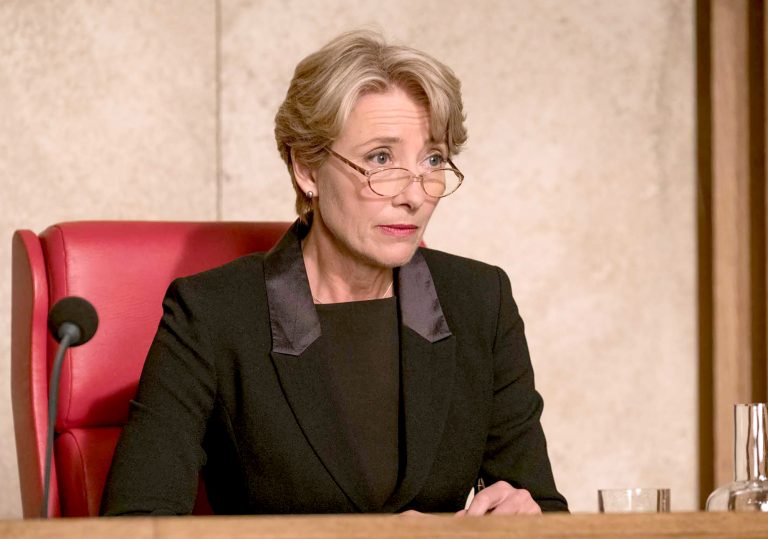 The Children Act is not the film you expect it to be and it is all the more better for it. The story starts in the usual dramatic way – everything you were given in the trailer – but shifts direction and at a fluid pace. It flows through this strange and unusual plot, twists in an unpredictable way. The plot thickens with many different emotions and elements. To underline the drama and enhance the poignancy, there is well-tuned humour within the film, especially in Emma Thompson’s frank delivery.

Why yes, the main focus is about this young boy and his somewhat manipulation into death, but it also turns into a movie about agency and life – how important it is to own who you are.

Speaking of Emma Thompson is a brilliant lead for this. She is a commanding force that drives the drama. She has this air of inhibiting a character; from the way she totters around without shoes whilst at home, a soft kick of a suitcase, or the fast and focused way she delivers verdict – it is very precise and amazing to watch. Thompson knows when to let Maye be calm and collect yet knows how to make her vulnerable – even in the moments where she has to keep regal and professional. It’s one of Thompson’s best performances (but, then again, when has she ever been bad?)

Stanley Tucci as Jack, the wayward husband, is the biggest complaint here. First of all, I understand that there is frustration and abandonment for him, but, also, he is portrayed as a petulant child. That’s may be how Tucci intends to play him but there is such a flagrant selfishness that keeps you at a disconnect with his side. He begins to feel completely unnecessary if only for a plot device to drive Fiona out of sync. Tucci is great but his character is not.

Fionn Whitehead, star of Dunkirk, seems to fumble a little bit with a more wordy script. That being said, he has a lot of promise to be a proper lead actor but he needs to evolve better for an arch of this scope.

An unexpected drama that is sensitive with the issues it is trying to convey, The Children Act is less about religion verses medicine but about life verses death. It’s about looking at love and the world through youth and appreciating beauty whenever and wherever you can. The Children Act is a tough film to get your head around, but brilliant one to mull over.

On a final note: There are definitely seasonal movies. Summer blockbusters, spring animations, winter warmers. The Children Act is definitely an autumn film and is released at least a month too early.

The Children Act is out on DVD & Blu-Ray now!