The story of a waning pop or rock-star crippled by mental health issue is a tale that have been told many, many times. In fact, A Star is Born, the debut feature by Bradley Cooper, has had three remakes since the first 1937. Whilst the original focused on actors, its subsequent sequels have been re-told with musicians. We’re obsessed with scrappy under-dogs raising to fame and fortune whilst simultaneously watching the famed and fortuitous fall. But with Cooper’s efforts, we get a murkier dive into the depths of a man’s spiral. 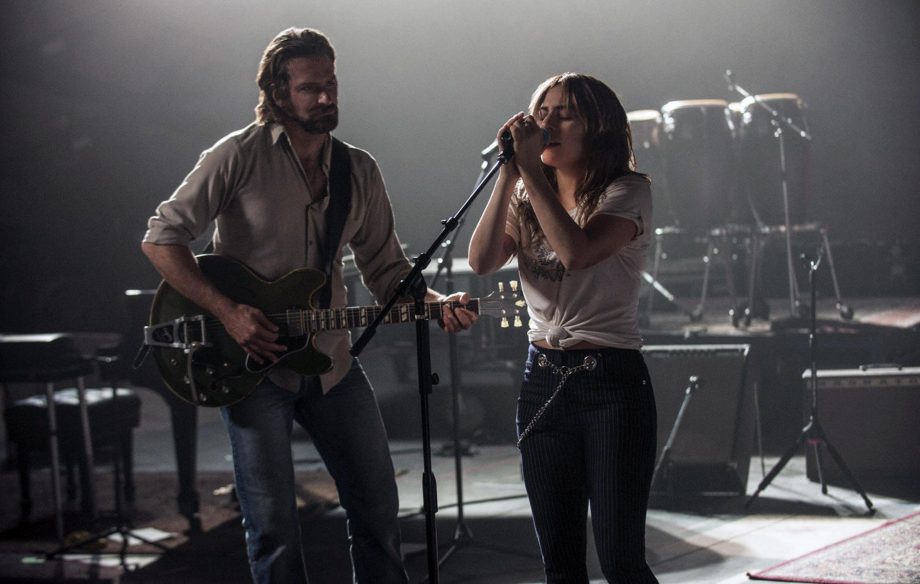 A Star is Born revolves around Jackson Maine, an established country singer-songwriter who is also addiction to alcohol and drugs. After an exhausting gig, Jackson finds himself trawling the bars of New Jersey and comes across Ally, singing La Vie en Rose in a drag bar. Overcome by her talent and her beauty, Jackson encourages her to write songs and perform. After dragging her out on stage during one of his gigs, Ally starts to earn acclaim and fame whilst Jackson struggles with his addictions and waning limelight. Can the new lovers survive?

Bradley Cooper has been attached to this project since 2012 and has worked hard to bring it to life. This passion shows in his nuanced and intimate movie, working as director, actor, songwriter, producer, and screen-writer. That’s an extraordinary feat for just one person and it’s clear that his zeal has seeped into this film. Sluicing down everything he does here to tackle his main roles (as actor and director) seems a bit remiss here and yet they are his most defying traits here.

Jackson Maine is Cooper’s best performance, by a country mile. A slow-drawling country singer who mumbles his sentences through a haze of booze, torment, and a dwindling hearing loss. His initial stumble onto the stage already sets up the chaotic territory that Maine navigates. Cooper delves deep into his surly performer, establishing a strong backstory that created this pitfalls and character flaws. He walks the line between victim and villain as he copes with his illness under the constant shine of the light. All whilst watching Ally transform in front of him. It’s a deftly handled performance that creates a palpable atmosphere on screen.

Cooper’s direction is interesting, and there is certainly room for another wide-shot or two. Cooper keeps the camera fixated mainly on himself and Gaga, crafting a wondrous world of intimacy between the pair. Their utterly believable as a pairing and the chemistry absorbs the screening and Cooper uses a grainy and overwhelming look for the film. Whilst the story may tread familiar ground, the fervent enveloping of the film immerses you into this dramatic experience.

Lady Gaga has already proven herself to be a top actress, winning a Golden Globe for her performance in American Horror Story: Hotel. Here as Ally, she is truly remarkable. Although she cannot quite reach the heights of Cooper’s Jackson Maine, Gaga takes it inwards and evolves her character from a wide-eyed (yet somewhat malcontent) ingénue to establish pop-star dealing with someone else’s pain. Gaga excels and is able to belt out vocals with an astonishing array of emotions. When the finale hits, it’ll be difficult to not find yourself silently sobbing.

There is also tremendous support in Sam Elliot, who plays Jackson’s manager, and older brother, Bobby. It’s hard to describe the amount of rawness that Elliot interjects into this long-suffering character. There is one instance, however, where he is merely driving his car away and he drags you into this broiler pot of visceral emotion. It simply adds a finishing touch to the spectacle.

A Star is Born is not the musical event of the year, nor is it a gleeful Mamma Mia escapade. It is a tender and muted and brilliant. This is a concentrated drama with music and musicians. It’s a phenomenal directorial debut from Cooper and boasts two great heavy-weight performance. This will surely sweep up a massive amount of nominations this coming award season with Cooper a shoe-in for Best Director and Best Actor. If so, it is richly deserved.