The End of the F***ing World is one of those shows that bounce around your peripherals. Like you see it advertised everywhere, you are intrigued by the premise, and the amazing title, as well as the lead actors but there is something that is telling you to watch it later and catch it another time. (Heck, I even have a friend who helped cast this show and you’d really think that’d push me into a viewing, but still unto the back-burner it went.) There is always something holding you back.

With this show, that thing holding you back was pure stupidity because The End of the F***ing World is spectacular.

Based on a graphic novel of the same name by Charles S. Forsman , the show stars Jessica Barden and Alex Lawther as two rogue teenagers, Alyssa and James,  who wind up running away from their respective families. However, Alyssa is a loud-mouthed and rambunctious girl who kicks off with only the slightest provocation whilst James believes himself to be a psychopath who is willing to kill Alyssa when he finds the most opportune moments. That being said, they make an unlikely pairing  in this hilarious and dark comedy.

Not to be too hyperbolic but The End of the F***ing World hits every single note and does it so bloody brilliantly. It’s a shame that the title is censored because the “fucking” is needed for emphasis. It is fucking fantastic. It’s a show that has everything: amazing acting, a winding story-line, the blackest of wit, and gorgeous cinematography. Created by Jonathan Entwistle and Charlie Covell, with direction by Jonathan Entwistle and Lucy Tchemiak, the show is in-sync, providing a captivating story-line and characters that are hysterical and endearing to watch.

It’s not just about the comedy either, there are a lot of teenage issues lurking underneath as the pairs flight means they have to combat against a terrifying adult world. The themes of identity and discovering who you are thanks to the mad-hap world around you and the company of a soul who gets you play a major part. Leading to some emotive revelations, The End of the F***king World is awash with depth character pieces that populate their increasingly dangerous journey. 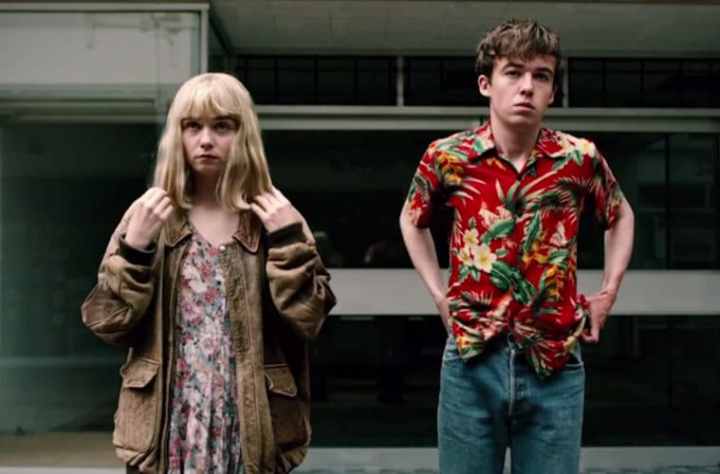 Barden and Lawther are terrific together. The latter made her breakthrough in the great The Lobster whilst Lawther has appeared in The Imitation Game, X+Y, and Black Mirror’s Shut Up and Dance. The pair have used this experience to develop these interesting characters that flit between two extreme versions of teenagers. Lawther layers his supposed “psychopath” with such brilliant qualities that his awkward lack of worldly understanding becomes winsome. Alyssa is a hard egg to love, and she’ll tell you that herself, but Barden takes her from one note  to an exciting lead star who is trying desperately to belong. Their chemistry is brilliant and they are completely watchable together.

A modern day Bonnie and Clyde with great allusions to True Romance, The End of the F***ing World is a compulsive watch. I’m telling you, I put one on episode  before going to bed last night and wound up at three a’ clock in the morning thriving with excitement and jealousy. That’s because it is one of the best developed shows on television with two incredible leads, a stunning storyline, and absolutely absurd dark comedy. Make sure you f***ing watch it.