Favour for Liam Neeson has definitely taken a turn since he announced he once tried to take revenge on any black man back a couple of decades ago. Since his “outburst,” many have been debating his words.

In the midst of all the mayhem, his brand new – awkward – revenge thriller Cold Pursuit comes out which is probably the most insane movie he’s released lately.

Directed by Hans Petter Moland, and a remake of  Norwegian film In Order of Disappearance, the film sees Neeson as Nelson Coxman – a snowplow driver in the glitzy Colorado ski resort Kehoe – and he’s just been nominated as Citizen of the Year. Sadly, his son dies from an  alleged heroin overdose and, in his grief,  Nelson uncovers a whole criminal underground that my have been the reason his son died. As gang members are bumped off one on one by one, Nels finds himself in the centre of a drug war – all equally out for….revenge.

Cold Pursuit is a ludicrous film and absolutely bizarre to watch. The tone of the film is like watching a baby deer on the ice. It slips and slides all over the place. It tries to balance on this serious, pouting drama such as Nels’ sorrow for his dead son then it slips on a bunch of mafia members having a snowball fight.

Here’s the thing, tonal shifts in movies can work when they are executed brilliantly such as last year’s phenomenal Blindspotting or Ryan Reynold’s The Voices. Cold Pursuit hasn’t fleshed out exactly what it wants to be and that makes the shifts in tone and pacing feel jarring. It is definitely trying to become some sort of homage to Coen Brother’s Fargo but along the way fails to be slick and clumsily falls short of a well made piece. 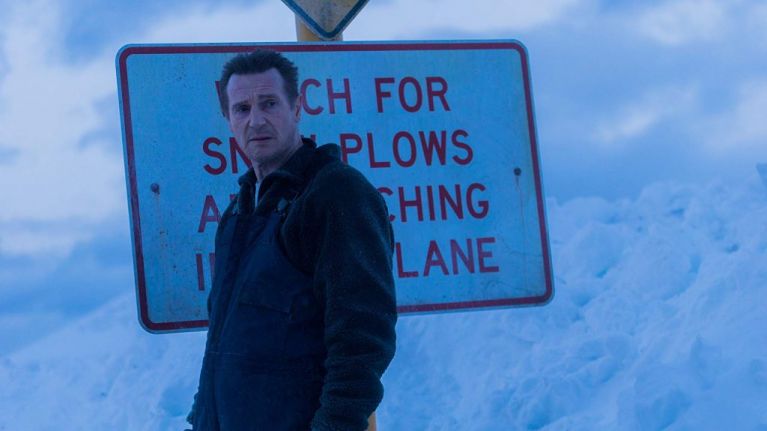 Liam Neeson is  OK here. His barely audible anger and rage is well used here. Tom Bateman plays this really weird mafia boss who’s accent gets more and more like a poor imitation of Heath Ledger’s joker as time progresses. Laura Dern is…in it. And Emmy Rossum, a prominent actress, tries her best here as somewhat of a France McDormand character that is woefully under-utilised. Despite some lofty names here, they all feel as though they are in wildly different films which doesn’t elevate the confusion with the tone.

Cold Pursuit is a jumbled mess of a movie that is not cohesive enough to work. It’s a shame because there are parts here that are brilliant but the material is wasted. Cold Pursuit would’ve worked better as a more serious movie, rather than interjecting the humour.  Instead, it is a movie that’ll now provoke one or two chilly receptions.

Cold Pursuit is out 21st February!