Destined for Oscar glory in the eyes of this reviewer, especially since Three Identical Strangers didn’t make the shortlist, the documentary Free Solo follows climber Alex Honnold as he attempts to climb the face of El Capitan in Yosemite National Park without a rope. Husband and wife directing team Jimmy Chin and Elizabeth Chai Vasarhelyi make us care about the obsessively single-minded Alex as he challenges himself to scale 3,200 feet of sheer rock face with no safety net and a significant risk of death.

From that description, you might think that Alex is some rich kid with an expensive but dangerous hobby. When we first meet him, he is living in a van. He has climbed many rock faces before but has never attempted ‘El Cap’. No other free-solo climber has successfully ascended it, with its seemingly insurmountable features such as the ‘Boulder Problem’. 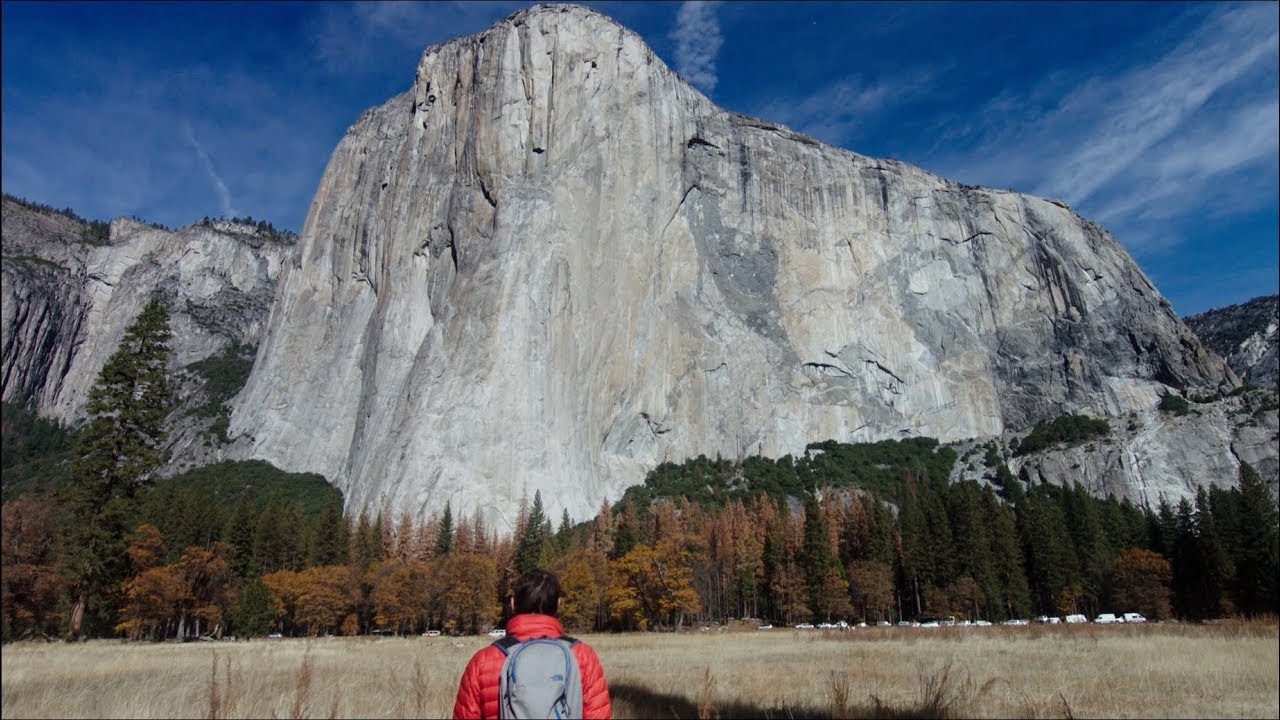 With many successful climbs behind him, as well as an autobiography, ‘Alone on the Wall’ the thirty-one year old Alex has a degree of celebrity. A high school student asks him how much money he has. ‘As much as a dentist,’ he replies. He donates a third of his earnings to a charitable foundation improving lives in Africa and considers himself lucky to turn his hobby into a living.

However, he has also been shaped by his father Charles, who ‘never hugged him’ and may have had Asperger’s. Alex describes himself as a ‘real dork’ at high school, earning straight As. However, he dropped out of the University of California in his second term, drawn heavily to the outdoors.

Does Alex share his father’s condition? He is honest – or unguarded – enough to say that he would never put the love of a woman before his hobby. Yet as he prepares for the El Cap climb, he has a girlfriend, Sanni McCandless, who met him at a book signing and thought he was cute. ‘I didn’t hear the word ‘love’ in my household,’ Alex explains. He’s being pedantic: his mother spoke French (she was a teacher) and uttered ‘Je t’aime’. He learns hugging – he wasn’t hugged growing up – and now he’s a big fan.

In the most revealing section of the film, we see him have a CT scan. Alex’s amygdala, not to be confused with Natalie Portman’s character in The Phantom Menace, doesn’t register fear the way most brains do; the amygdala processes emotions. He doesn’t fear death when climbing; rather he is motivated to achieving peak physical condition to negotiate precarious hand and foot-holds.

Sanni was indirectly responsible for one of Alex’s few injuries – she let go of the rope. However, they didn’t break up and still climb together. However, during his preparation, Alex undergoes another fall.

In many ways, Free Solo is a generic sports story, with the requisite setbacks. There is also the alternative. Sanni attempts to give Alex a normal life – they buy a house together in Las Vegas. He finds a coffee machine puzzling and eats his meals with a spatula used for cooking.

The climbing sequence is genuinely thrilling: heart-stopping, suspenseful and gruelling to watch. We hear the debate about whether filming would distract Alex or threaten his safety if there was an accident with the drone. During the ascent, the cameraman on the ground can scarcely bear to look at the monitor.

How you feel about Alex’s climb may to some extent be determined about how you feel about rock climbing in general. I felt for the people Alex left behind as he continued alone. I didn’t marvel at his prowess – I just wanted him to live. I don’t think Free Solo will popularise climbing without ropes. But it does show how people with Asperger’s – or the son of a man with Asperger’s – have different abilities. Spiderman doesn’t need the bite of a radioactive spider to climb walls – just a differently functioning amygdala and an appetite for a challenge.

Free Solo is nominated for Best Documentary Feature. The Oscars will air on ABC on Sunday 24 February 2019 (01:30am, Monday 25 February, Sky Cinema in the UK)