Well…that’s it for another year. Another exhausting round of Oscar winners. Some amazing, some OK, and some just plain bad. The 91st Academy Awards have seemed to be the most exhausting with just a few films feeling worthy of even a nomination let alone an accolade. Despite this, the show must go on…

…which is apt because Bohemian Rhapsody went home with the most awards for Editing, Sound Mixing, Sound Editing, and Best Actor for Rami Malek. Hmmmm.  Many will be in dispute for its wins but Malek for Best Actor certainly seems justified somewhat. Green Book went home with the biggest gong – Best Picture and, again, that seems like a lot of derision and contention will come from that win.

Roma scooped up three awards for Best Foreign Film, Best Director, and Best Cinematography meaning Cuaron is going home with all the prizes as the most awarded individual. Black Panther won for Best Costuming, Best Production Design, and Best Score, the latter two awards being the first wins for a black artist for Ruth Carter and Hannah Beachler respectively. Best Documentary went to Free Solo naturally.

Our favourite awards go to Regina King for Best Supporting Actress for If Beale Street Could Talk. Spider-Man: Into the Spider-Verse scooped up Best Animation which is….it is just absolutely genius.

Perhaps the biggest (and happiest) win goes to Olivia Colman for her performance in The Favourite and the absolute best speech of the night.

Best Animation: Spider-Man: Into the Spider-Verse 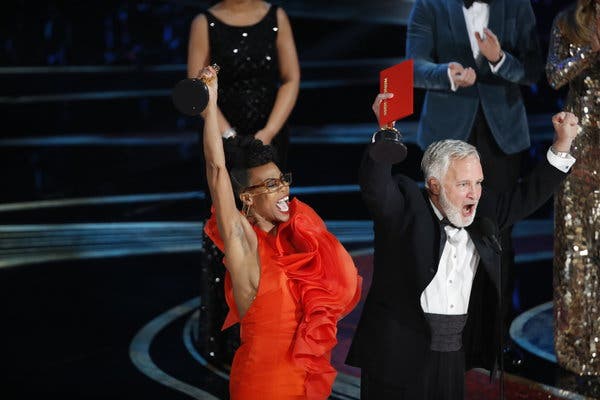 Did your favourite win? Let us know in the comments!