Everybody Knows (Todos lo Saben) starts with the metronome sound of a clock mechanism. The introduction send us into the heart of a church bell tower, between darkness and sunlight, while a bird is trapped in a space where it cannot find this way out….

Laura (Penélope Cruz) returns in Spain with her two children, for the wedding of one of her sisters. She meets Paco (Javier Bardem), ex-lover and the buyer of the part of the family property that Laura had inherited. When her daughter goes missing during the wedding reception, the family is plunged into chaos. Under the eyes of the villagers, the troubles of the past and many resentments reappear…

We meet Laura as an energetic mother, happy attending the reunion of her family. Sweet dialogue exchanges establish the characters and their relationships, allowing us to discover them at the same time. The happiness of the reunion is soon met by with many different struggles such as a ign of financial worries, heartache, and common problems we all meet in life. But the reunion is also an opportunity for Laura’s daughter, Irene (Carla Campra) to meet Felipe (Sergio Castellanos) : a youthful love which, in the shadow of the conjugal celebrations, echoes the love that Laura and Paco once had for each other at their age.

The scenes follow one another and respond to one another, dominated by the ardor that takes precedence over reason until drama and suspicion are imposed. Asghar Farhadi admits the human mechanics even before really sketching the contours.

The audience play the role of a discreet observer who suddenly examines, the masks that shape what is happening in a front of us. Asghar Farhadi captures the silences, the sustained or fleeting glances, like the flighty speeches that dictate the rumour. Their masks fall off and reveal some shenanigans whose interest is, as the title underlines, of little importance.

With the naturalism of his approach and this cast, Asghar Farhadi takes us as far as his camera plunges us into a novel. The complexity of his writing is total; Does he set up a thriller, inviting us to look beyond the acts, facing the souls of these seeming archetypes? The answer of that question came directly from the screen which becomes a mirror where our own reflection is drawn….

The Iranian director doesn’t leave his obsession for human interaction behind. Todos lo saben serves as a manifesto: Farhadi is obsessed with human mechanics, what moves them, what ignites them, and their contradictory movements. 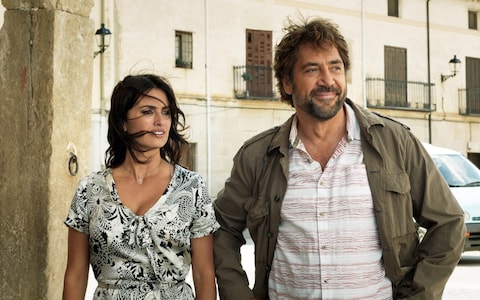 The structure is well recognised – reminiscent of About Elly (a weekend with friends turns to the criminal investigation coupled with the unveiling of buried intimate secrets) – the film that made Farhadi internationally renowned. Characters who seemed uninteresting are fascinating under the effect of unexpected. In Spanish vineyards, money reigns. We need it for the ransom, we need it to atone for past mistakes. He is the one who gradually undoes Laura’s solar insurance with Paco’s beautiful male chauvinist, and exercises that their performers (Cruz and Bardem) master perfectly.

With Todos lo saben, the Iranian director does not hesitate to highlight themes such as temporality and the importance of the past, mixing with the codes of a thriller as well as snippets of a great striking human comedy. Farhadi is not at his best, a little too academic, a little too “great cinema”, but it remains a very pleasant, tense and highly recommendable film.

Everybody Knows (Todos lo Saben) is out on DVD & Blu-Ray now!