Tim Burton is now a name in cinematic fare that requires a lengthy sigh leaving it. The air gushing from your mouth and the roll of your eyes sounds like a thunder storm from here. Whilst many heralded him as their gothic prince who created stripy insanity such as A Nightmare Before Christmas and Edward Scissorhands, many more people are getting sick of his antics, especially after pale faced Dark Shadows flopped like Oogie Boogies exit. However, there are some movies of Tim Burton films that fall out of this category, were largely missed and similarly panned. But secretly, they are golden.

One of those movies is Mars Attacks! This crazy invasion story is possible one of Burton’s underrated and unseen gems that literally owned my television back in the nineties. Starring a weird collection of stars, as you can imagine, it centres on, well, Mars attacking. Obviously centred mainly in America, this bobble headed aliens come to take over and Earth finds itself having to defend. 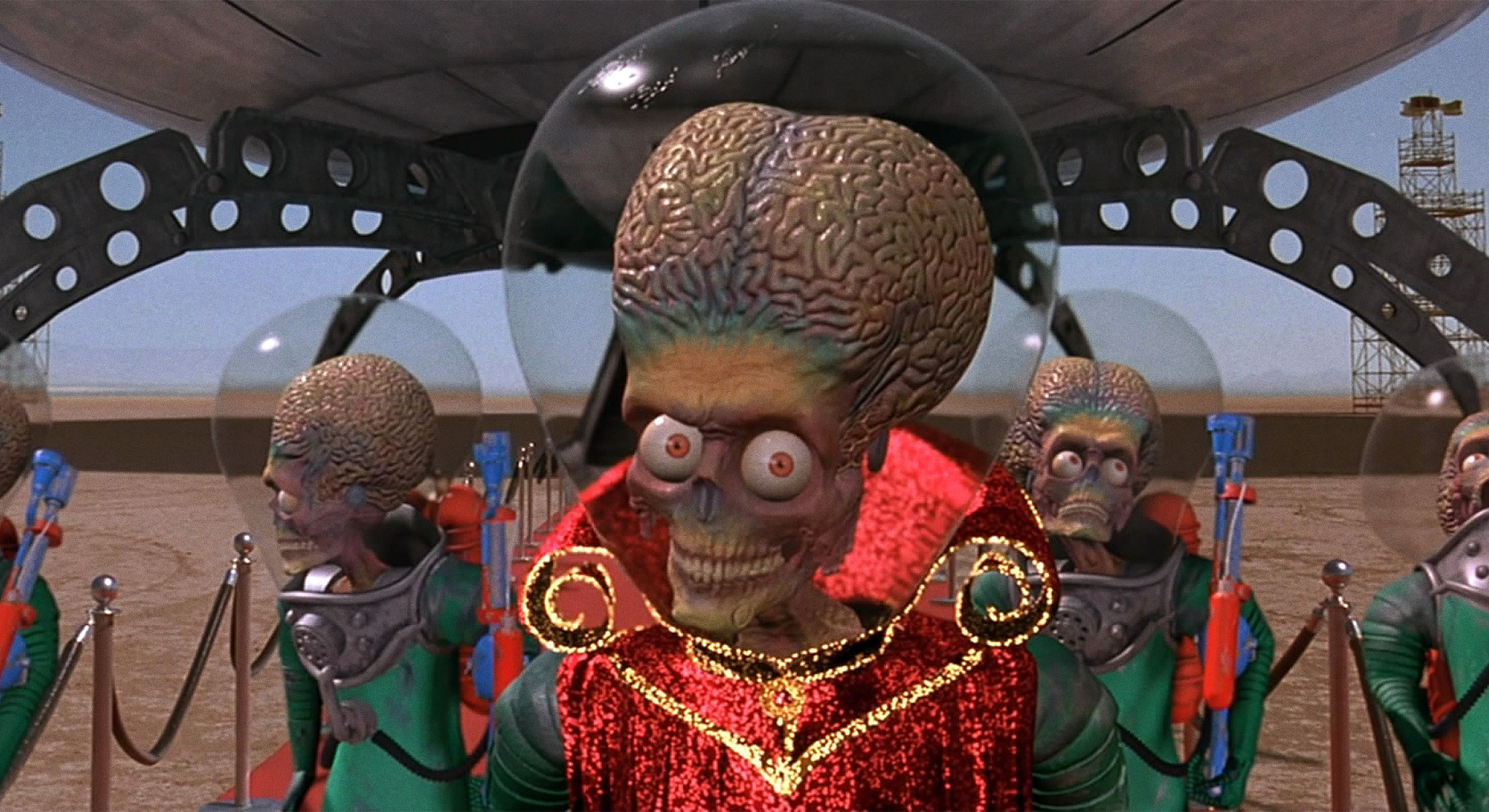 Supposedly a parody of Alien invasion movies, Tim Burton’s insane spoof is much more than that, it’s an homage. Sending up the likes of It Came From Outer Space and more, Mars Attacks! sublimely tackles the visual inaccuracies of science fiction fare and blows them up on a larger scale. The comedy not only comes from the mockery, but from Burton’s crazed mind teaming with Jonathon Gems to create a film that works on its own hyperactivity, ballsiness, and dark humour. Fast and snappy, the film allows us to find hilarity in absurdity and moments such as Danny DeVito’s untimely end and Sarah Jessica Parker’s head sandwiched to a Chihuahua’s body are memorably funny. Even the way the aliens look and slide in movement make Mars Attacks! a visual riot; their wide eyed quirkiness etches into your mind for a lifetime.

What’s more Burton added a star studded event and catapulted Mars Attacks! into this oddly surreal movie. A film that sees Pierce Brosnan, Jack Black, Sarah Jessica Parker, Danny DeVito, Martin Short, Natalie Portman. and many more all striving to survive this humanity ridding ghouls is ridiculous in itself. Not to mention that Jack Nicholson plays the President (and a sleazy rodeo business man in Last Vegas,) what more could you ask for? The cast is hilariously huge, which adds much to the spectacle. It’s more of a bonus that 99% of the characters are heinously unlikeable so watching them meet the impending doom is undeniably satisfying.

Maybe it’s just me. Maybe it’s because I watched Mars Attacks! all the time and found joy with every viewing. Maybe the critics of yesteryear were right, I am merely a product of Burton obsession and E-Numbers bouncing off the walls. Maybe this review feels exactly the same way; a sloppy pretentious mess perpetuated by the big heads behind the screen and not on it. Or maybe it is actual genius, full of laughter, and folly.

But if you ever find me watching this film and not chortling at the moment where Tom Jones’ discovers extra-terrestrial backing dancers to “It’s Not Unusual,” you can already pronounce me dead.

Mars Attacks is on Netflix now!