Eddie Marsan is one of our greatest treasures.  He is a performer who has been brilliant in everything that he does from the villainous (Tyrannosaur, Deadpool 2) to the wimpy and somewhat kind-hearted (Filth, The World’s End.) Marsan can be twisted and turbulent but never anything less than stellar, making a mark in whatever production he is in. In fact, Marsan is so phenomenal that when people walked out of the latest Fast & Furious film Hobbs & Shaw, their biggest comment is that he appears with a flippin’ flamethrower.

I say all this because Eddie Marsan appears in horror schlock Feedback in which he may be it’s only saving grace. 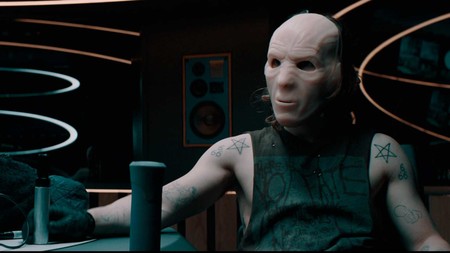 Directed by Pedro C. Alonso and written by Alberto Marini, Feedback revolves around  somewhat controversial radio host Jarvis Dolan who sparks err and riles up the right-wing masses a la James O’Brien for LMB.  After being kidnapped by those he has pissed off, Jarvis is urged not to go on air but does so anyway, only to find his booth has been invaded by masked captors. Can Jarvis survive the night or is something more sinister about to happen?

Feedback is doused in the usual red and blue cinematography that is famous with low-budget London thrillers. A metallic unusual setting that is complete with a weird but beautiful dead room plays scene to a pulpy film which plot unravels the harder you think about it. There is a whole background story that, whilst awful enough to make you understand the events of the film, is overtly complicated.

The plot only works if you like at least one of the characters which is difficult because even with crusaders and those who are objectively in the right – there just isn’t enough depth added to them to be likeable. As the films acts become grimmer, your investment in either side – both Jarvis and the Assailant wears thin because they are either played in an over the top, exhausting manner or turn out not to be the heroes you expected them to be. There are better avenues that could’ve been explored, scuppering a dark ending.

Eddie Marsan is terrific though – that is certain. He can balance all the different sides of Jarvis and wield them perfectly. Angered radio host fighting against political injustice turned scared victim turned worried father and friend turned egotistical and fame hungry. Marsan fleshes out this character with different sides of the beast, making him completely watchable.

Feedback could’ve been better simplifying the story and focusing on characters we’re truly meant to care about. Set in a singular setting adds to a claustrophobic plot, but in this instance, venturing outside would’ve aired out some grievances.