A pre-film announcement, very in-keeping with the period setting Here Comes Hell is going for, tells us that anyone with a nervous exposition should look away. Escape whilst you still can because the horrors are going to shock and alarm you. The curtain opens, the acts begin, and we are sent into chillingly and silly horror film.

Set in 1930s, Here Comes Hell revolves around four former college friends – George, Freddie, Christine, and Victor – plus Freddie’s latest squeeze Elizabeth. The gang are reunited to celebrate Victor’s recent purchase of a rundown mansion. Whilst there, with some tensions pretty high, Victor announces that the building used to belong to a troubled man named Ichabod Quinn who believed that he could open the gate to the other side. Calling upon a local medium named Madame Bellfont, the gang are in for a night of ghoulish surprises. 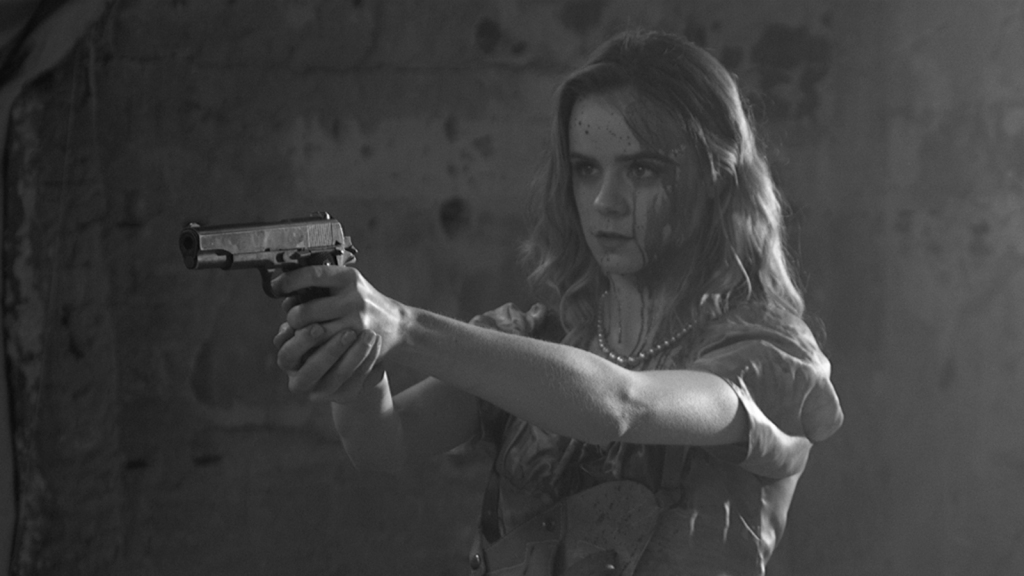 Here Comes Hell, directed by Jack McHenry, is a low budget fun-filled romp that does exactly what it says on the tin. It is hilarious and gruesome all at once. McHenry does well to replicate the era, particular the tropes such as convertible car-driving against shaky green-screen, stilted dialogue, and characters ripped straight out of a black and white noir. But the director also builds. The film spends a long time showcasing its skill in turning back time and therefore when the horrendous acts and demons come, it is a delightful surprise.

At a mere hour and fifteen minutes, Here Comes Hell is a quick and witted horror that is quite good parody of an era. Feeling like the Evil Dead’s littler and compact overseas cousin, McHenry does well to introduce plenty of toe-curling moments and one rather grim but brilliant prothestic. There’s also some modern badassery that interject a lot more spirit into the film later on. This especially comes from Jessica Webber’s quiet Elizabeth who turns into triumphant heroine the minute shit hits the fan. It is all fun to watch.

If you are looking for a bit more depth or characterisation, this probably isn’t the best place to find it. This isn’t Downton Abbey, after all. Still – there are some character moments you wish the script would linger on, especially when confessions and dark secrets come to play.

However, if you want a jolly good-show and a rather splendid horror spectacle, then Here Comes Hell is right up your street. Spiffing!