I want to be the very best, Like no one ever was…

You know the words.

Oh yes, the first Live-Action feature film from the world wide phenomenon that is Pokémon has finally reached movie live-action movie status. Inspired by one of the series many incarnations, Pokémon Detective Pikachu see’s the lovable star of the first show teamed up with a former trainer, (Justice Smith) to solve a crime. Set in a new world, filled with various Pokémon where human’s aim to catch and fight the creatures.

This may not be the purest of version’s that die hard fans were hoping for but Pokémon Detective Pikachu is a hilarious, fun filled ride that gives us the sassiest Pikachu ever, thanks to the vocal talents of Ryan Reynolds.

Tim, (Justice Smith) a young former Pokémon trainer, is called to Ryme City, after the sudden death of his Police Officer father. Once there, he finds his father’s former Pokémon partner, a Pikachu. Instead of the usual ‘pika pika’ Tim can hear Pikachu talk, while no one else can. Despite having no memories and a serious coffee addiction, Pikachu convinces Tim they can solve the case together. With more Pokémon, more friends and a serious cover-up to expose, can the duo solve the case?

Based on the famous series which has spawned games, comics, animated films, collector cards and merchandise worldwide. Director by animation filmmaker Rob Letterman, who’s previous films include Shark Tale and Monsters vs. Aliens.

The plot is by no means original, but what the film lacks in story it makes up in charm. You follow Tim, Pikachu and Lucy as they venture to uncover the truth. 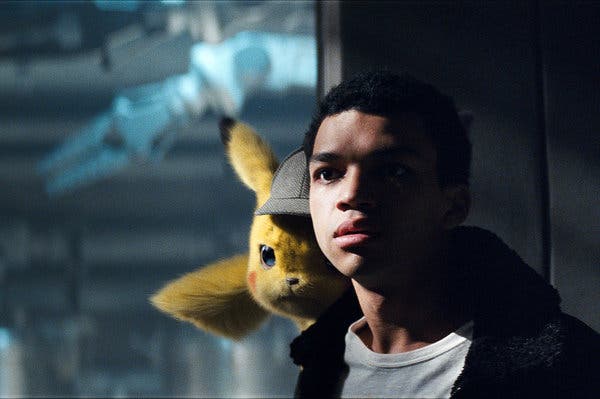 Visually the film borderline shows off the large selection of Pokémon it has recreated. From a cute Psyducks, to a gigantic Charizard, they are all appealing and somehow fit in with their live-action surroundings. Ryme City is also a sight to behold. Made up from various locations, (spot how much of London you can see) its the perfect setting for all of the Pokemon shenanigans.

Like the Deadpool series it is fair to say that the film is propelled by the charms and humour of  Reynolds. It would have been hard to image him as a cute furry creature but he fits the characters perfectly while still feeling like the sweet yellow companion. A scene where he sings the iconic Pokémon theme song

A fun, hilarious and entertaining addition to the Pokémon franchise.

Detective Pikachu is out on DVD & Blu-Ray now!