The film industry has a had a long history of using and abusing anyone different. Whether it’s is casting non-disabled actors in dramatic roles about being inhibited by their disability or simply making them the villains of the piece. From Todd Browning’s Freaks to even latest musical escapade The Greatest Showman, those who are different have been exploited on the big screen.

Aaron Schimberg’s feature Chained for Life looks at the impact of this particular cinematic prejudice.

In a similar way that Nat Taylor’s Birth of a Nation reclaimed it’s titled, Schimberg’s film is called Chained for Life; the titled based on 1952 exploitation film about conjoined twins. This black comedy is a cutting look at the cinema industry and how they use disabled actors. The plot revolves around Mabel, a young actress who is starring a blind woman getting treatment in a hospital populated by those with disfigurement. Playing opposite Rosenthal, an actor with facial tumours, Mabel finds herself exposed to the exploitative way in which disabled actors are portrayed on the big screen. 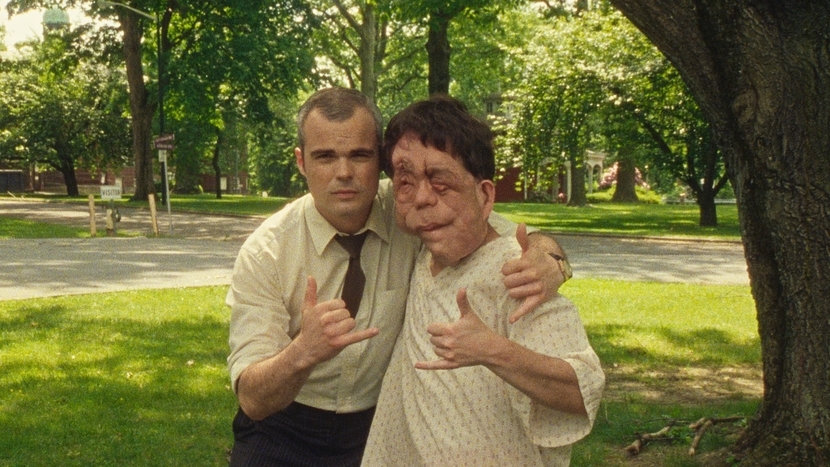 Schimberg’s film is a brilliant satire on the film industry. The somewhat pretention such as a “fake” German actor. The fuss and boredom from filming long days. The “artistry” mixed with the “ego.” It’s all there in the opening sequences of the film. When the disabled actors arrive, the film finds itself feasting upon false pity (and very real misplaced ones too.) Without outward and over the top bullying, the film hones in on micro-aggressions and horrific understated bullying that is just as affecting. Through the eyes of Mabel, we not only see the normalcy of living with disability, but also learn the way people’s words and acts can be affecting.

The biggest problem with Chained for Life is that as the film goes on, it gradually starts to use it’s bite. A fantastical sequence on a character’s dream lacks steam for it to make an impact and the finale doesn’t pack the same impact as the following first hour.  There’s a lot of material here but it isn’t utilised completely over a the runtime and loses it’s way towards the end.

That being said, when Chained for Life does work, it works fantastically. Helped along by some impressive acting by Under the Skin’s Adam Pearson’s and Teeth’s Jessica Weixler. The pair forge a great friendship on the screen that hones in the main message of the film. It’s with this chemistry that the film becomes an enjoyable exploration of how representation – the right representation – matters to everyone. If we have to understand that through the eyes of a blonde-haired, wide-eyed actress than so be it but Schimberg those wield his message with a sensitivity and snark that makes this an interesting film.

Chained for Life is out in cinemas on 25 Oct