The script for Gemini Man – in some way or form – has been banging around Hollywood for 20 or so years, bouncing from Harrison Ford to Mel Gibson, Jon Voight to Chris O’Donnell (yes to both), Arnie to Sly, consistently hampered by a lack of technological advancement.

1997 found Tony Scott firmly attached, and 20 years later, now released in eye straining 120 fps 3D, his fingerprints are still evident. Now in the hands of Ang Lee, Gemini Man has spluttered onto the big screen in the shape of a technological circle jerk, less cinema more a series of occasional “oos” and “aahhs” at the feat of creating two Will Smiths.

And there is only Will Smith. His pull-power in Hollywood may have dissipated over the last five years, but his charisma is still something to be beholden, so having two of him is a smart move.

Smith is government assassin Henry Brogan, who we first see assassinating an anonymous terrorist on a bullet train. Although the kill is efficient, he fast becomes disillusioned and decides on retirement. Enjoying his downtime, Henry – a keen boater – meets undercover agent Danny (Mary Elizabeth Winstead) who quickly disrupts the relaxation bringing word that an informant told the agency that the man he killed was innocent.

On the run and in search of the truth, the agency sends “GEMINI” to bring an end to Henry.

For a film so much about Nature vs Nurture, it says very little about either. Aging Smith is an experienced assassin who now struggles looking in the mirror while young Smith – upon meeting his elder – falls into the same trap, questioning why he does what he does, whist struggling with his own face. 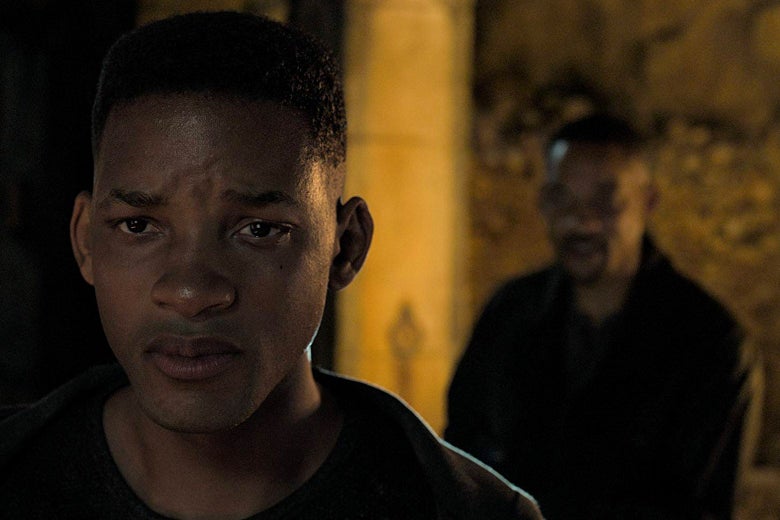 Lee, whose films have long been about the minutiae of human interaction and inter-personal feelings should feel at home in this environment, but he seems only proud of the technological clout the film carries.

This clout is genuinely, if sporadically impressive. Two fight scenes on motorbikes and countless hand-to-hand battles are disorientating in just how convincing they are, although a final epilogue suffers from a rogue floating head.

And really the film feels as if only made to dazzle through technology. The script itself has gathered dust in a locked draw since ’97 and although we’re told it’s gone through countless rewrites, there is little evidence of any of this. Simply mentioning a rogue iPhone does not make a film modern.

It may be that the film has tried all too hard to elicit an “oo” an “aah” whilst forgetting to tell a story with any real emotional connection.

The Smith on Smith action cannot carry a lack of will power from the rest of the film. For a film so designed to dazzle, it’s remarkably dull.

One thought on “Gemini Man – Review”